Subscribe Now Get The Financial Brand's FREE Email Newsletter
While customer satisfaction ratings for traditional banks edged up very slightly over the past year, they are not as strong as they were a decade ago or as strong as satisfaction ratings for non-bank competitors or tech companies. With digital consumers becoming more demanding, are many banks and credit unions at risk of customer defection?

The importance of improving customer experience is central to virtually every financial institution’s mission. Organizations worldwide have continuously ranked ‘improving the customer experience’ at or near the top of Retail Banking Trends and Predictions research done by the Digital Banking Report in each year of the survey.

As opposed to looking to achieve a specific level of satisfaction, banks and credit unions are faced with trying to exceed consumer expectations that are continuously increasing because of the engagement with both nontraditional financial services providers (fintech firms) as well as highly customer-centric technology organizations such as Amazon, Google, Facebook and others. In addition, as mentioned in the 2019 U.S. Retail Banking Satisfaction Study published by J.D. Power, “At the consumer level, the evolution of digital channels is creating a new set of demands and expectations that banks must understand and address.  Customer loyalty within segments — critical for the future —is questionable.”

The research from J.D. Power shows that there has been only very minor incremental improvements in customer satisfaction over the past year, while also showing that ‘switching’ between financial services providers is at the lowest level on record. Is this good news for the industry, or a source of ill-advised comfort given the industry forces at play?

While there can be a lot of debate around the ways to measure customer satisfaction, there is usually a strong correlation found between satisfaction, relationship building potential, loyalty and revenues. The reason seems rather clear — if a consumer is happy with an organization, they tend to do more business with that organization. Assuming this is true, some of the recent findings from J.D. Power should be cause for concern.

These findings are both an opportunity and a challenge. According to Paul McAdam, Senior Director, Banking Intelligence at J.D. Power, “Looking ten years into the future, when digital banking will be the norm for nearly all consumers, retail financial institutions will be required to be unique by scale or unique by strategy. Personalization of important customer journeys — transactional, advisory and solving problems — will emerge as the ways to elevate customer trust.” 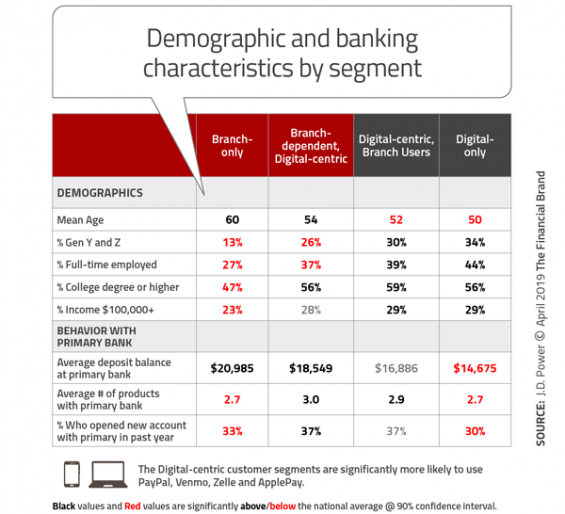 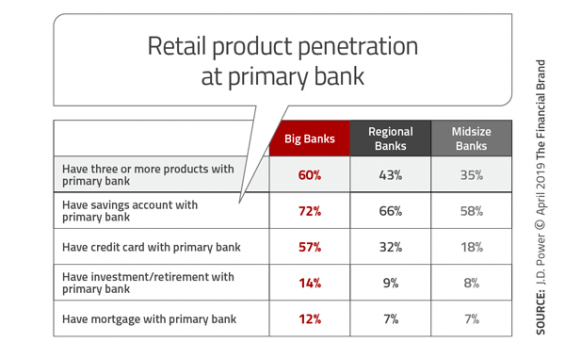 More and more consumers are moving to digital channels for transactions and engagement. This is a dual-edge sword, however. While digital channels can reduce costs through improved efficiency and can lead to improved ways to personalize engagement in real-time, there is less opportunity to engage in meaningful conversations around cross-selling and to provide advice.

According to the J.D. Power research, ‘digital-centric’ consumers are significantly less likely than ‘branch-dependent’ consumers to say they “definitely will” reuse their primary bank for their next banking or financial services product purchase (55% vs. 61%, respectively). But, while ‘digital-only’ consumers generate lower levels of revenue for banks and credit unions currently, they generate lower variable operating expenses. They are also more educated, have a higher incidence of being employed, have higher incomes and have a greater upside in the future for more profitable banking services. 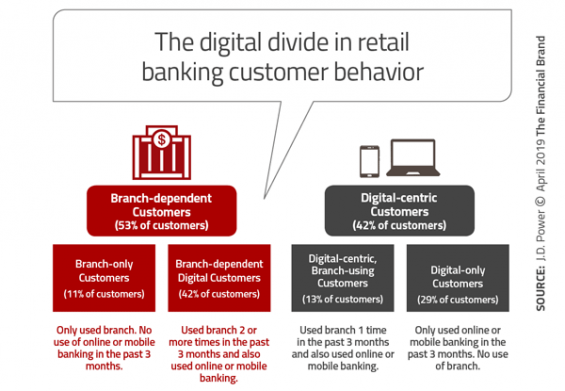 Most importantly, this segment is not going away. According to the 2019 FIS Performance Against Customer Expectations (PACE) study, 73% of all transactions occur on mobile (42%) and online (31%) channels. Digital consumers will be more demanding than branch-based consumers because of expectations being set my tech firms and other digital-centric organizations (in and out of banking). “The battleground for winning and keeping today’s [digital] banking consumers is in the front lines of customer experience,” said Bruce Lowthers, co-chief operating officer, FIS. “While security and trustworthiness continue to be critical attributes, more consumers are choosing their banking providers on the basis of a convenient, frictionless digital experience.”

Providing advice/guidance through the customer’s preferred channels is essential to improving the perception of personalization and, ultimately, improving customer engagement. Because of the newness to the banking system and their higher income, consumers under 40 with investable assets greater than $100,000 had the greatest interest in receiving advice or guidance across most of the channels measured. At the same time, consumers over age 40 with investable assets greater than $100,000 had the lowest levels of interest in advice provided via digital channels. 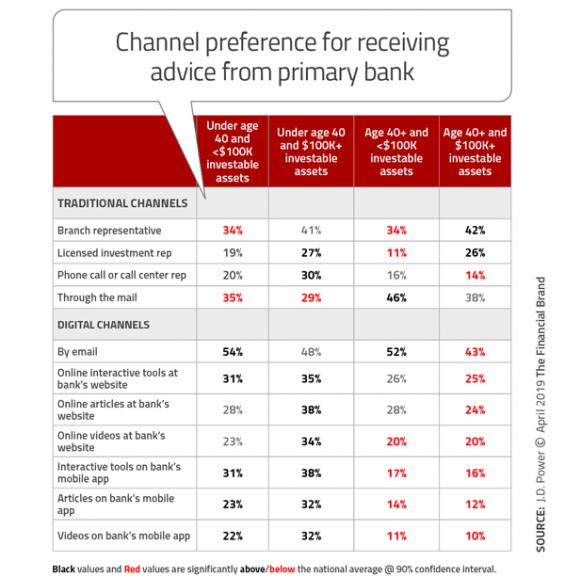 The Financial Brand has extensively discussed the importance a strong onboarding process as part of initial account opening and engagement interactions. Not only does this have the potential of improving customer satisfaction, but also can improve cross-selling, loyalty and referrals. Unfortunately, few organizations maximize the potential of the onboarding process, either because of channel mismanagement (forcing consumers to use channels they don’t prefer or not having a seamless multichannel process), inappropriate communication (a sales focus instead of service focus) and/or ease of the process.

According to the J.D. Power research, branches continue to be the primary location where new accounts are opened (80% of accounts opened are in the branch). Often, the process may begin as a mobile or online process, but the consumer is ‘forced’ in the branch due to the lack of an end-to-end multichannel opening capability. Once the account is opened, 82% of consumers stated that there was post-account-opening follow-up. Most of this follow-up was done by email (43%) and/or direct mail (42%), with phone being used about half as much as these other channels (22%).

Onboarding continues to be a key component of customer satisfaction, however. In fact, according to J.D. Power, customers who were onboarded had a significantly higher customer satisfaction score than those who did not (878/1000 vs. 802/1000). It was also found that in-branch onboarding had a higher satisfaction level, most likely the combination of more personal interaction in the branch and poor communication via direct mail and email channels.

Incidence of Switching Not a Valid Customer Satisfaction Indicator

One of the most interesting findings of the 2019 U.S. Retail Banking Customer Satisfaction study was that only 4% of customers had indicated that they had ‘switched banks’ in the past year. This is the lowest level since the study had been initiated. This is a good example of a potential ‘false positive’ in the research.

While it is entirely possible that fewer consumers switched their financial relationships, this may be the result of a greater use of digital channels as opposed to consumers being ‘happy’ with their primary financial institution. For instance, while many consumers would switch banks or credit unions when they moved out of a region, this is no longer required if the majority of banking is done digitally.

More importantly, many consumers are using new financial services providers without closing their primary financial relationship. For instance, mortgages are often being provided by relatively new providers, such as Quicken Loans, while ‘saving plans’ may be opened at Acorns and digital payments are being processed by PayPal and P2P payments are being done through Venmo.

In other words, the lack of switching indicated by consumers can’t be seen as a customer satisfaction indicator. It may simply be an indicator that location is no longer a major determinant of convenience in a digital banking world and that consumers no longer need to live in close proximity to their checking account institution.