Subscribe Now Get The Financial Brand's FREE Email Newsletter
Consumers remain frustrated with megabanks, and those ready to switch are putting $649 billion in deposits and over $30 billion in revenues in jeopardy. BofA, Chase, Citi and Wells Fargo are the most vulnerable to lose their customers, deposits... and profits.
Subscribe Now!

According to a study by management consultancy cg42, the 10 largest retail banks in the U.S. are in trouble. Based on a survey encompassing more than 3,000 of their current customers, cg42 ranked banks based on projected customer attrition and potential revenue loss. The study, which is an update of research cg42 repeated in 2011 and 2013, found that up to 23% of current bank customers are ready to change banking providers. cg42 says 8% will actually follow through and make the switch.

The firm uses data to calculate its own proprietary Brand Vulnerability Index (BVI), which measures consumer frustrations along four variables:

In their analysis, researchers identified the top frustrations among at-risk customers, then compared those findings against customers who actually switched. The results point a spotlight on the perennial irritations that plague banking consumers:

The prominence of these frustrations jumps significantly among at-risk customers. Two in particular — “being hit with overdraft charges” and “being nickeled and dimed with incidental charges” — generate significant noise.

The most common frustrations cited as reasons for switching by customers who changed their primary bank in the last 12 months are high or predatory fees, overdraft charges, branch location, moving to an area where their old bank does not have a presence, and poor customer service.

Read More: Who Are You Really Competing Against?

Who’s In The Most Trouble?

After survey responses were collected, analyzed and modeled, cg42 produced a ranking of the top 10 retail banks by vulnerability, from most to least.

But then again… maybe big banks have nothing to fear. For decades, they’ve relied on consumer apathy and inertia as a source of stability to maintain the status quo. Why should anything change now?

Indeed the cg42 study found that attitudes about financial institutions have remained fairly stable since 2011. Two out of every three consumers believe that “all banks really care about are their own interests, even though they may claim they have my interests at heart.”

Nearly half say “all banks are the same,” and 61% feel that it is too much of a hassle to switch. That would seem to make sense. After all, if every bank is the same, why endure the hassle of switching? And yet that is precisely what cg42 says many at-risk consumers will do — throw up their hands in disgust with one big bank only to move to another. 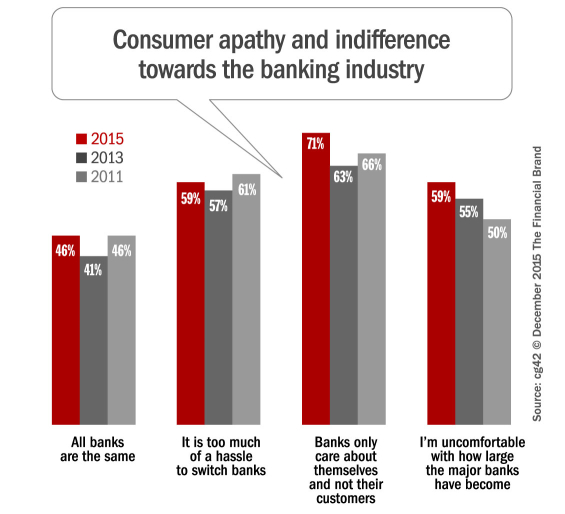 How Real Is The Peril Facing Big Banks?

Stephen Beck, founder and managing partner of cg42, says that if big banks don’t change their ways, their customer base — and profits — will shrink.

“With hundreds of billions of dollars on the line, banks need to reevaluate how they treat their customers,” he cautions. “They need to understand the substantial financial impact of failing to address customer frustrations.”

Smaller, community-based banks and credit unions can only hope megabanks don’t heed cg42’s warnings; they’d love to scoop up as many big bank refugees as possible.

As for Beck, he doesn’t sound terribly optimistic that the titans of banking will pivot in ways that will thwart impending customer defections.

“Since we began studying the retail banking industry in 2011, we have seen consistently high levels of frustration among customers,” said Beck. “Despite an improvement in vulnerability levels from 2011 to today, a majority of consumers continue to believe that banks don’t act in their best interests.”

Who Will Prevail In the Battle for Banking Consumers?

The results in cg42’s 2015 study show signs of improvement for many major retail banks, but certain challenges still loom large and the levels of customer frustration remain significant — pointing to an opportunity for innovative players to provide a real alternative that addresses the lingering frustrations of customers.

But which banks will step up and respond? That’s the question bothering Beck: “Who will move beyond empty advertising messages and truly put the customer at the center of the banking experience?”

Some observers say the answer is already before us. There seems to be an endless wave of fintech startups and neobanks poised to disrupt the banking industry. If traditional institutions continue to resist change and ignore their shortcomings, these scrappy outsiders will happily fill the void.

cg42 says the concept of “brand vulnerability” (or “customer vulnerability”) can be a useful tool, whether it is leveraged by a megabank or challenger brands — inside the financial industry and out. Indeed the firm’s full “2015 Retail Banking Vulnerability Study,” which runs a hefty 95 pages, breaks down the competitive weaknesses of 11 of the biggest — and most vulnerable — institutions in the U.S, detailing the key frustrations that are shaping customers’ attitudes and influencing their propensity to switch.

Smaller institutions, regional banks, credit unions and other alternative financial service providers might find this type of analysis particularly helpful when identifying the critical vulnerabilities of megabanks, so they can plan to specifically target areas of unmet need. Insight can be used to guide strategic planning and how institutions define their value proposition. With a better understanding of consumer sentiment, community banks and credit unions can refine their marketing communications to highlight areas where megabanks are most vulnerable.

In fact, cg42 says institutions of all sizes should consider implementing their own vulnerability assessment, adding relevant measurements to the standard set of metrics used to track business and brand performance over time.