Subscribe Now Get The Financial Brand's FREE Email Newsletter
It seems counterintuitive, but when it comes to customer complaints, the more the better — as long as you handle them quickly, with empathy and learn from them. Here are four practices that banks and credit unions can use to leverage complaints as a competitive advantage.

Complainers are your best customers. So says Chris Minnich, a Content Specialist at Apptentive. In a blog, he notes that 96% of unhappy consumers churn without complaining. The 4% of consumers who do blast your financial institution on Facebook or send a scathing email are a rare gift because they care enough to invest their time in sharing their opinion.

Of course, it doesn’t feel like a gift, especially when this “gift” is posted on social media for all current and prospective customers to view. And view they will.

“Customer service is a spectator sport, just like baseball or basketball,” says Jay Baer, digital marketing expert and best-selling author. Only instead of watching two teams battle on the field or on the court, consumers are watching how your bank or credit union handles a complaint.

A quick answer is essential — 14% of consumers expect a response to social media complaints within an hour.

Handle the complaint quickly and with empathy and you win. Handle the complaint badly — or worse yet, ignore it — and everybody loses. The consumer is left with a poor experience and you are left with not only an unhappy and frustrated consumer who may take their business elsewhere, but an entire social media audience who are less than impressed with your customer service skills.

“Of course, you want to make consumers happy,” says Baer. “But the real economic value is what others on the sidelines think about how you handled the complaint,” he adds. “How you react to complaints can reduce churn and earn new customers.”

What You Don’t Know … Is Worth Knowing

Because so few consumers give you the gift of a complaint, it’s tempting to think that not receiving complaints means consumers are happy.

But you would be wrong.

Almost three-quarters (73%) of business decision makers believe they are “very aware” of customer’s happiness levels with their company and 98% said they knew how their customers were feeling, according to a survey by Insightly. By contrast, only a fifth (21%) of consumers say that companies are “very aware” of their level of happiness with them. 14% feel that companies are completely unaware or oblivious. 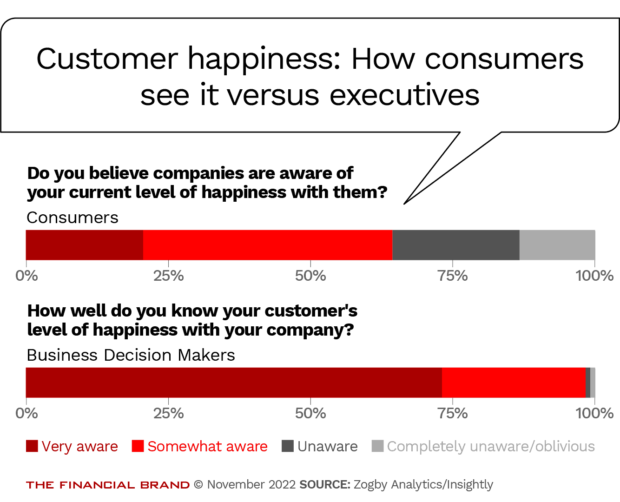 To uncover the truth, all you have to do is ask: 98% of consumers say they are likely to provide feedback if asked, according to data from Apptentive, a mobile feedback platform. Perhaps frame the request by asking, “Will you help us improve our financial institution?”

Don’t waste the opportunity to turn complainers into advocates, attract new consumers and run your bank or credit union better. Here is a four-step roadmap for handling consumer complaints:

Complaints are insights into your business in disguise. Think of complainers as low-cost consultants.

Analyze the complaint and fix what’s wrong. Think of it as the “W” in a SWOT exercise — Strengths, Weaknesses, Opportunities, Threats. Remember that the number of complaints you receive is not a measure of customer or member satisfaction. It could just mean that customers or members don’t feel it’s worth it to complain and will just leave.

You have to get more complaints, solve the issues causing complaints, before you get fewer complaints. There is a variety of ways you can encourage unhappy consumers to let it all out. Try sending SMS text or email messages with a brief survey after a banking interaction; ask them to stay on the line with the contact center to answer a brief survey, or provide a feedback box on your website.

Take complaints on any channel including social media, says Baer. Consumers pick a channel for a reason. Make it easy to complain, agrees Ray Poynter, Chief Research Officer at Platform One. And then respond using the same channel.

The worst “channel shifting” is when the consumer complains digitally, and a bank forces them to an analog channel, like a branch, notes Baer. If a consumer gripes on Twitter, answer them on Twitter. If they give you a negative review or write a complaint on Yelp, answer them on Yelp.

If an institution makes it difficult to complain — such as making them call a contact center or compose an email — it will lose out on getting nuggets of information about how it can improve.

Consumers are an impatient lot, with 14% expecting a response to social media complaints within an hour, according to Microsoft’s State of Global Customer Service Report. About half (46%) of consumers will give you 24 hours to respond, and 25% are more forgiving, expecting a response in less than 48 hours.

25% say that they’ve given up hope of ever getting a complaint addressed.

Baer recommends beating the above response time to surprise consumers, in a good way. “Speed expectations never go backward,” says Baer. A faster response than consumers expect shows them that you care, he says. “Lead with speed.”

Not responding to a complaint is akin to saying, 'We don't care,' says marketing expert Jay Baer. He estimates that not responding lowers Net Promoter Score by half.

Equally important: Never ignore complaints. Half of consumers say they have a more favorable view of a brand that responds to complaints on social media, says Microsoft.

“Haters aren’t a problem,” Baer concludes. “But ignoring them is.”

“Unfortunately, it seems many of us have lost our way and there is an empathy deficit,” laments Baer. He challenges banks and credit unions to buck the trend. “There’s a massive opportunity to offer kindness and show you care when answering complaints.”

An empathetic approach also sets a bank or credit union apart from the big technology companies that are not known for treating consumers with empathy.

While financial institutions don’t always have to lead with “I’m sorry,” they must prove to the consumer that they understand where the person is coming from and that they have a legitimate gripe.

One final point from Baer: Don’t “information consumers to death.” If a consumer complains about an overdraft fee, for example, don’t send them the bank’s overdraft policy.