Subscribe Now Get The Financial Brand's FREE Email Newsletter
Digital banking reigns supreme as the preferred means of consumer banking, and Capital One has ridden that wave to the top of a big-bank satisfaction survey. But Chase and PNC, with far different strategies, are very close behind. Their success points to a mix of CX practices that other banks and credit unions can adopt.

There’s little in banking that the global pandemic hasn’t affected. Maintaining satisfaction with customer experience ranks highly on the issues affected by COVID-19, and two sub-issues have arisen as consumers have had to adjust their banking habits to COVID realities: “Efficient digital channels” (website and mobile app) and “Allowing people to bank how and when they want.” The latter is a function partly of need, partly of preference.

One beneficiary of this trend is Capital One Bank. Propelled by its aggressive emphasis on digital banking, begun long before the pandemic arrived, the big retail bank jumped three places (over PNC Bank and Chase) to the top ranking in J.D. Power’s 2020 U.S. National Banking Satisfaction Study.

“When you look at the current environment and how consumer behaviors have changed so much this year, it was not too surprising to see Capital One move up this year, given their convenience and their value proposition around low fees and good digital channels,” says Paul McAdam, Senior Director, Banking & Payments for J.D. Power, in an interview with The Financial Brand. He notes that Capital One achieved the top satisfaction ranking despite having 46% fewer branch offices than in 2015.

“Capital One is smart about messaging. They communicate on more of an emotional needs-based level and not just product function and pricing.”
— Paul McAdam, J.D. Power

At $364 billion in assets, Capital One is the smallest of the eight U.S. retail banks covered in the J.D. Power rankings, but has sharply honed its communication skills. “Capital One is smart about messaging,” observes McAdam. “They’re striving to communicate on more of an emotional needs-based level and not just product function and pricing.” For example, on the home page of Capital One’s website, you’ll see things like, “I want to grow my money so I can sleep better at night.”

Satisfaction Drivers of the Top Banks

The speed of the rise to the top of Capital One is more noteworthy than its score or position. Chase and PNC’s rankings were quite close, and McAdam acknowledges the gaps are not statistically significant. “They’re all really good at preventing problems,” says McAdam, “and when there is a problem, it tends to be easy to fix.” These three big banks are all “efficient operators,” he concludes. 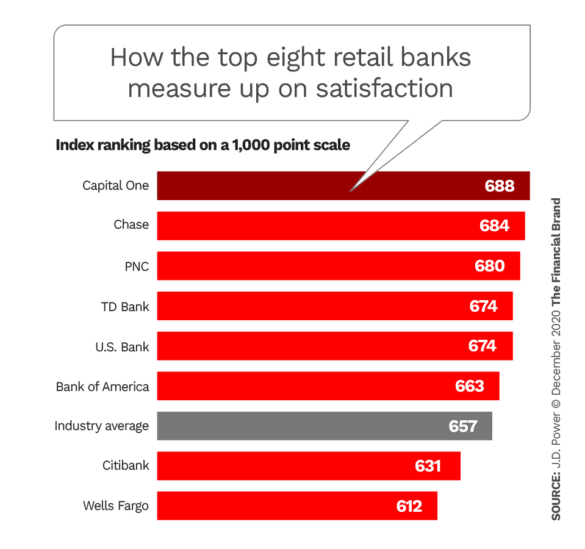 In its report about the survey results, J.D. Power notes that Chase is consistent, with consumers rating the bank a top-three performer in all seven attributes used in the satisfaction model (listed below). Not surprisingly, given that it’s the country’s largest bank, Chase has the highest brand consideration among consumers looking for another banking product or service.

PNC scores highest in study metrics associated with trust and loyalty, including Net Promoter Score, the report states. PNC’s customers particularly like the convenience and service quality provided through the bank’s branches and ATMs, according to J.D. Power. “Customers of PNC are the most likely of all [eight] banks to report it being ‘very easy’ to get the help they wanted.”

The satisfaction survey, in its fourth year, surveyed 8,877 consumers who are customers of “national banks,” which J.D. Power defines as a U.S. bank holding company with domestic deposits exceeding $200 billion. (Truist Bank fits that definition, but at the time of the survey in August/September 2020 the BB&T and SunTrust brands, which merged to form Truist in 2019, were still operating distinctly in the marketplace, so it was not included in the public ranking.)

The seven satisfaction attributes used in the survey, revised for 2020, are as follows:

As indicated earlier, the first two attributes had the highest overall scores among the respondents. Consumers rate service levels at the eight banks as “pretty reliable,” McAdam observes, and people are highly satisfied with mobile and online banking in particular.

“But when it comes to some of the higher-order needs like ‘Saving me time or money,’ the scores become a little more challenging,” he says.

Customer satisfaction can sometimes be given lip service when up against “hard” goals of growth, sales, profits and share of market. McAdam counters that the research firm has found a strong relationship between satisfaction and repeat purchases.

“Capital One, for example, had the highest portion of customers in this study who had opened a new account with the bank in the last year,” he states. “So not only do they have the highest overall satisfaction in the study, but their existing customers are telling us they’ve been far more likely to open up new accounts with them, compared to the other banks.”

The top ways to build trust — and damage it — were fairly consistent across various consumer segments, including age, according to J.D. Power. The charts below offer a summary of consumer hot buttons. 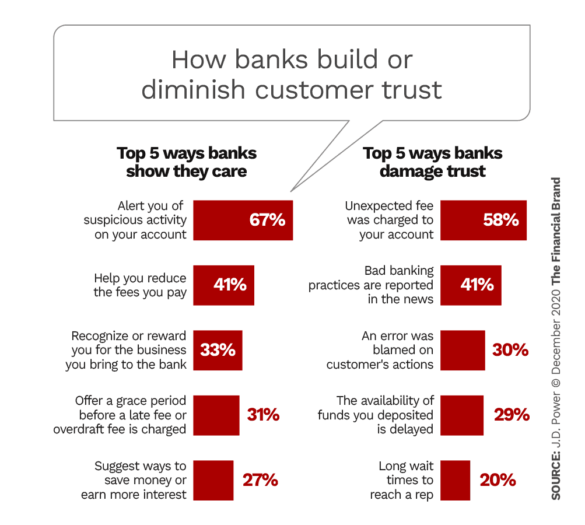 Why Some Banks Scored Lower

Of the two large institutions that ranked below the overall average for customer satisfaction, Wells Fargo wouldn’t surprise too many people. The survey research shows that Wells doesn’t score low on everything. They have satisfactory performance with products and channels, for example. But as McAdam observes, the data demonstrates an ongoing “negative halo” resulting from a long string of negative news, even though some feel the bank may have turned the corner.

Citibank’s low ranking may seem a bit more surprising. And in fact the survey finds the bank has several notable strengths. Among them: a more affluent customer base where the bank scores very well in terms of the advice it provides. Citi also has the highest number of products owned per customer of the eight institutions in the survey. McAdam says this is a legacy of its financial supermarket heritage of deposits, credit products, mortgages, investments and insurance.

The problem, he states, is that “the coordination of the experiences between those different product holdings doesn’t seem to be as consistent with what we saw with the other banks in this study.”

The close satisfaction scores for three large institutions with very different approaches to branching suggests that the importance of in-person banking, even in a pandemic, has not evaporated. As the chart below shows, however, the biggest gap by far between consumers who have “used a channel” and those who “prefer to use a channel” is with visiting a branch or using an ATM. Whether that gap will shrink if vaccines are as successful in reducing COVID-19 infections as hoped, remains to be seen. 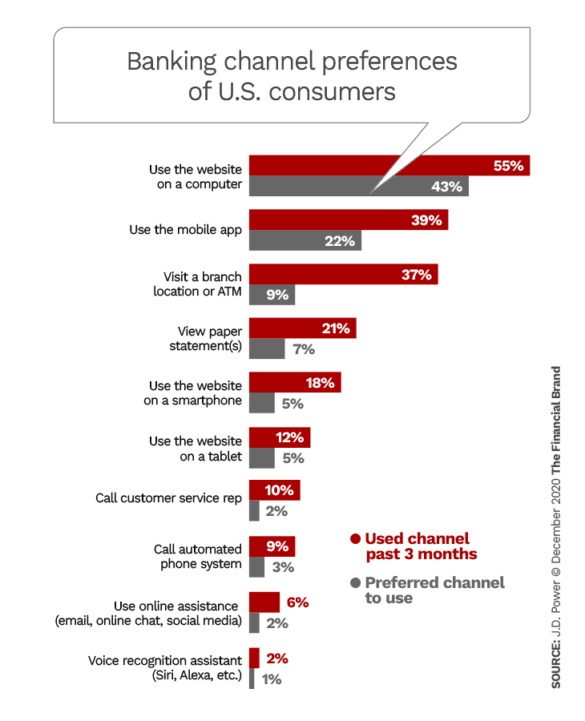 “The importance of branching really does depend on who the bank is and who their customers are,” McAdam maintains. “Banks like Chase or PNC are in many markets with young-to-old customers, whereas Capital One skews toward the younger side.”

As a result, Capital One is aggressively scaling back its traditional branches while selectively opening new-concept Capital One Cafes. PNC, on the other hand, is strongly supportive of branches, reiterated recently in its announced acquisition of BBVA U.S.A. Chase is a blend of both, trimming branches while opening modern facilities in new markets. All three banks strongly support digital banking.

In terms of the most-preferred digital channel, online banking via a website really jumps out from the J.D. Power data. “That’s probably driven by the normal behavior of folks sitting down at their computer a couple of times a month and saying, ‘OK, I’m going to pay my bills, and see what I’m doing in the checking account’.” McAdam offers. “I think the bigger screen helps as well as having access to more information in online banking than in the app,” he adds.

Not too surprisingly, age is also a factor. Older customers tend to be a lot more online-banking oriented than users of mobile banking app, the research data confirms.

Other key figures from the study: Just 23% of consumers surveyed had received advice/guidance from their primary financial institution. 44% of the respondents are either “very” or “somewhat” interested in receiving such advice. 56% of this group of bank-using consumers had no interest in getting advice from their primary bank. “They indicated they would rather go to friends and family,” says McAdam. That represents a much broader issue for the industry, he observes.

“Consumers will seek advice from their primary bank for certain topics,” he states, “but we’ve found in focus groups that many consumers say things like, ‘I feel like I’m only going to get advice regarding what the bank has to offer. But if I go somewhere else I’ll get a broader point of view’.”

If banks and credit unions can overcome some of these hurdles — at least with the 44% who indicated some desire to receive advice — the survey found that these consumers have specific areas of interest: