Banks’ relationships with their customers in the UK and Ireland are under increasing pressure several years after the financial crisis began, with loyalty, satisfaction levels and behavioral patterns posing new challenges, according to Accenture research.

Comparing the results of its survey of 2,500 current account customers in the UK and Ireland completed late last year with those of a similar survey conducted in 2007, Accenture found that: 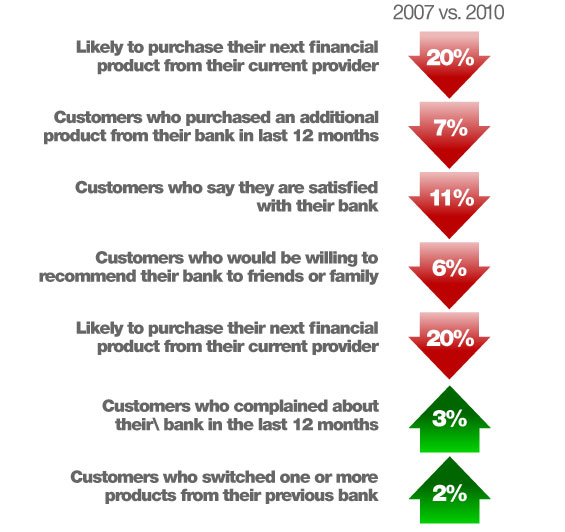 “These results provide further evidence that even several years since the financial crisis hit, the relationship between banks and their customers continues to decline,” said Peter Kirk, senior executive in Accenture’s Financial Services practice, and author of the research. “It appears that this is now influencing consumer behavior, with only a bare majority of high street customers likely to recommend their provider and customer defections continuing apace.”

According to the research, switching rates among British high street bank customers have remained significant. In the latest survey, 16% of respondents said they had recently switched one or more products from their existing bank vs. 14% in 2007. Another 14% said they planned to do so within the next 12 months.

“Banks must stop and listen to their customers or they risk losing them to new entrants and other competitors,” Kirk said. “But our latest survey found that one in five customer complaints were poorly handled by the banks. Each of those instances represents a lost opportunity to repair a strained relationship.”

Accenture’s most recent survey suggests that banks throughout the UK and Ireland face significant pressures in developing relationships with their newest generation of customers. Respondents aged 18 to 24 were 50% more likely than others to move to another bank — with nearly one in five saying they planned to switch one or more products from their current bank within the next year, compared to only 12% of older respondents who said they planned to make a switch.

But the survey also found that the youngest group of customers was about 30% less likely to complain to their banks than others, with only 13% saying they had registered a grievance with their bank vs. 18% of older respondents. Apparently they don’t think moaning makes much of a difference, so they simply move their money instead.

Customers aged 18-24 also placed more significance on value for money compared to their more mature counterparts who favored the promise of speedy and efficient service, according to the survey.

“With an emerging youth segment that is more likely to simply switch banks when they encounter a problem, rather than take time to complain about service, institutions must carefully analyze this group and adapt products, services and channels to interact with them on their terms,” Kirk said. “All the while, they must keep their more mature, loyal and communicative customers on their side.”

The survey found that more than two-thirds of survey respondents (69%) use internet banking on a daily or weekly basis. This compares with 19% who use branches, 7% who use mobile channels and 6% who use call centers with the same frequency.

“Three quarters of customers say they rarely if ever bank by telephone today,” Kirk noted. “As traditional call centers become a channel for handling only complex banking matters, banks will have to take proper advantage of this shift — just as they must adapt to the broader revolution in bank channels taking place.”

“To help rebuild customer trust and loyalty, reduce churn and improve retention, banks must enhance their online and mobile services, better integrate channels that their customers use most — like branches and websites — and focus on handling complaints properly the first time.”