Customer satisfaction with big banks is on the decline.

Overall, national banking satisfaction fell five points year over year between 2020 and 2021, according to the latest U.S. National Banking Satisfaction Study by J.D. Power. The study surveyed more than 8,000 consumers who banked with one of the nine largest U.S. banks (Capital One, PNC, TD Bank, Chase, U.S. Bank, Citibank, Bank of America, Truist, and Wells Fargo).

“An overarching set of developments we’ve seen across the industry is lowering the tide for everyone since May of this year. We have seen a steady and pronounced decline in the financial health of American consumers who have bank accounts,” Paul McAdam, Senior Director of Banking and Payments Intelligence at J.D. Power, told The Financial Brand. “It is putting greater pressure on satisfaction scores, and it’s impacting every bank out there, not just the big ones in our study.”

Despite a strong economic recovery by some measures, consumers’ financial health has weakened, J.D. Power found, which has pulled down bank satisfaction scores.

Capital One ranked the highest for the second year in a row with the top score in four of the seven attributes measured by the study:

The other three attributes the study identified are trust, people, and resolving problems or complaints.

In December 2021, Capital One announced eliminating all overdraft and NSF fees for consumer banking customers. While that particular move came too late to impact the survey, PNC, which ranked second, announced a digital solution in April 2021 called Low Cash Mode to help consumers avoid overdraft fees. 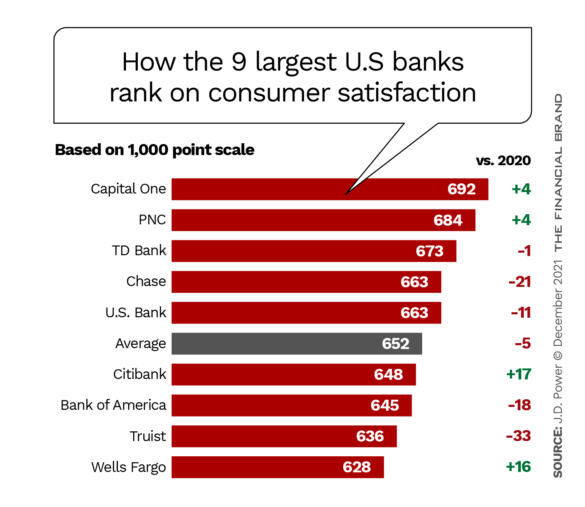 Customers now expect banks to deliver a flexible, highly engaging experience across all channels regardless of the segment they’re in, according to J.D. Power. Many say the most important way banks can provide that personalization is with relevant account offers and guidance on saving money and reducing fees.

Consumers have had a rough couple of years, and some of their frustrations are being taken out on their financial institution. While there was a brief economic rebound after the lockdowns and loosening of restrictions, the tapering of federal relief funds and the emergence of the Delta variant in 2021 led to more financial pressures. The percentage of consumers in the J.D. Power survey saying they were “financially healthy” fell from 52% in 2000 to 41% in 2021, while the number of consumers who said they were “financially vulnerable” rose from 27% to 36% during that time. 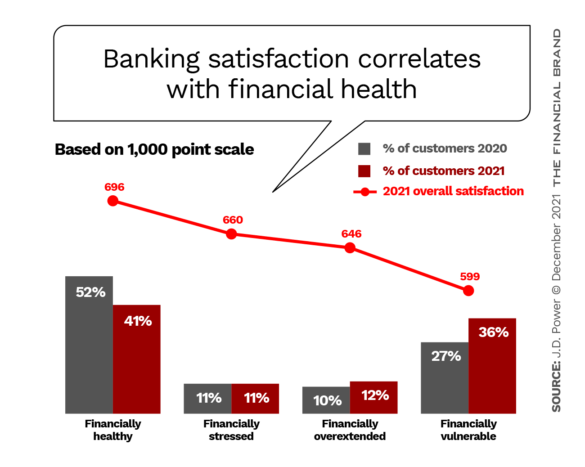 Banks and credit unions may not be directly responsible for these troubles, but they are often the face of foreclosures, late fees, and financial frustrations, says McAdam. While customers appreciated fee waivers, loan forbearance, and other relief in 2020, those programs have largely ended.

“We are seeing pressure on consumers being more stressed in terms of their savings picture. Their savings are dwindling along with their emergency fund and consumers are increasingly concerned,” McAdam notes.

When people have stressful financial issues to deal with, sometimes they just aren’t going to come away happy.

The industry’s most significant reduction in satisfaction was in “people,” down nine points over the previous year as consumers report subpar experiences with reps, tellers, and phone agents. “Let’s face it, interactions and relationships with their financial service providers may not be as pleasurable because the consumers themselves are facing stress and having trouble paying bills and are incurring late fees more than they have in the past,” observes McAdam. “It’s not the banks’ fault, but it is having an impact.”

On the other hand, the result also emphasizes the importance of having front-line employees equipped with the knowledge, data and tools to be able to assist customers with the more complex financial matters that are becoming more the norm for human-assisted transactions. 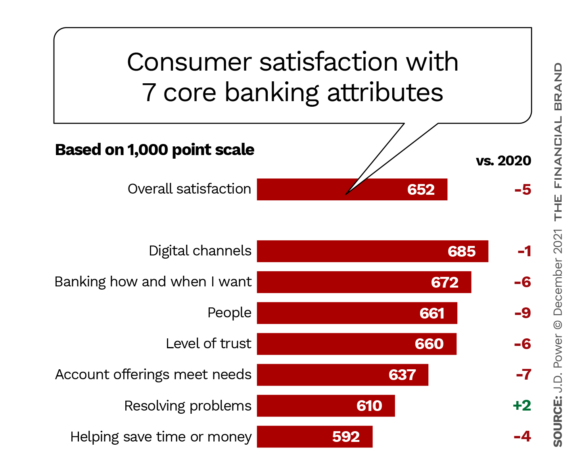 Other notable areas of declining satisfaction across the industry included “account offerings meet needs,” “banking how and when I want,” and “level of trust.”

Ways to Stay Top of Wallet

Despite overall declines in satisfaction rates, most consumers are receptive to expanding product relationships with their financial institution. As these customers tend to begin with a single-bank relationship, banks and credit unions have an opportunity to build more loyalty and trust.

Leading financial institutions are revisiting fee policies not just as a form of temporary relief but as a permanent solution to better compete with fintechs. “It’s essential in retaining and building relationships with younger consumers who opt for fee-sensitive fintech brands, observes McAdam. “Younger consumers are under greater pressure. They are generally more motivated by avoiding fees and by institutions that have fee-friendly policies,” he states.

Indeed, how banks and credit unions respond will depend on their strategies and business models. Aggressive moves on fees may not be the right move for every bank, McAdam acknowledges. And while fees are important, there are many factors that influence customer experience and satisfaction.

For instance, trust that their account is protected from fraud remained the most important satisfaction driver in the J.D. Power 2021 survey. Other important factors include:

It all comes down to consumers feeling that the bank is on their side, says McAdam. “Customers like to feel that a company has their back,” particularly in banking where many consumers consider there to be a tradeoff in that the institution has their deposit money to use.

Read More: The Future of Customer Experience in Banking is Personalized

As indicated, financial institutions that are successful in creating deeper relationships typically experience higher satisfaction scores. While many banks and credit unions have engaged in personalization efforts through customized service and messaging, the J.D Power survey revealed consumers are most interested in areas that related to personalized “advice” and “alerts.”

For example, 61% of respondents said helping them avoid fees was the most important way their bank could personalize their experience, while 39% wanted their bank to inform them when a different offering would be a better fit. Half of respondents also said they wanted their bank to send them relevant account alerts. The chart below indicates five key factors banks and credit unions can use to improve customer satisfaction. 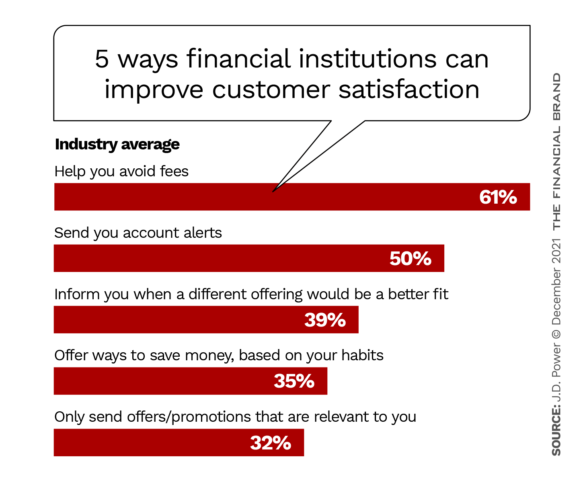 Yet the long-running trend is for fewer people to visit branches especially for routine transactions. And the industry has responded with many fewer physical facilities. So the challenge, also ongoing, is to meet the need for personal interaction digitally and remotely.