Subscribe Now Get The Financial Brand's FREE Email Newsletter
The cryptocurrency marketplace has been a war zone — plummeting prices, bankruptcies, layoffs. You'd think that crypto owners would have all bolted. They haven't. It's important for banks and credit unions to recognize why, because consumers want financial institutions to offer crypto services.

The crypto headlines for the first half of 2022 have been brutal: “Meltdown”; “Party’s Over”‘ “Crypto Winter,” etc. What was a nonstop free-for-all for those with the stomach for the ride has turned into a giant money drain sucking out roughly $2 trillion in cryptocurrency value since Bitcoin’s all-time high in November 2021, according to the Wall Street Journal.

Extreme volatility has described the crypto journey pretty much since Bitcoin’s launch in 2009. But the most recent plunge has been deeper and more prolonged than other busts.

So, game over, right?

Not so fast. Several studies in 2022 show that crypto ownership is still widespread. While collectively crypto investors have lost a ton of value, the same is true of equity investors, with the S&P down 21% for the year through the end of June.

Waiting to 'Buy the Dip':

How much did consumers' intent-to-buy-crypto fall from January to June 2022? Just three percentage points – from 26% to 23%.

Based on a survey it conducted in May 2022, The Ascent extrapolated that 46.5 million Americans who have never purchased crypto before are likely to invest in crypto for the first time next year.

Cryptocurrency is no longer only attractive to speculative investors. Everyday Americans are investing in digital currencies as well. Although Millennials, men and higher-income adults, predominantly white, are more likely to own crypto, Morning Consult found that the appeal is fairly broad. 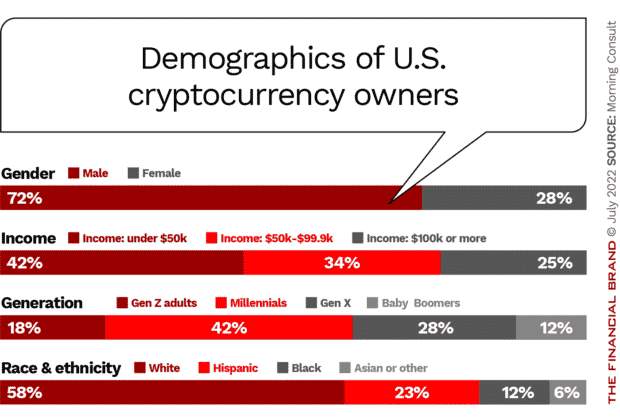 The banks and credit unions that had been wondering about if, when and how they should become active in cryptocurrency markets may have removed that from their do list since the crypto market tanked. Based on the above data, that might prove to be premature.

Today, the vast majority of cryptocurrency flows through exchanges such as Coinbase. But many other players are involved in the business of buying, selling, storing and sending cryptocurrency — Square’s Cash App is one example. Could traditional financial institutions serve a bigger role in the future?

Quite possibly yes, if consumers mean what they say. In a 2021 survey, Bitcoin company NYDIG found that 81% of current bitcoin holders would move their bitcoin to their bank. Seven in ten would switch banks to have access to bitcoin products, and 83% would be interested in earning interest on bitcoin in a savings account, money market account, or CD. 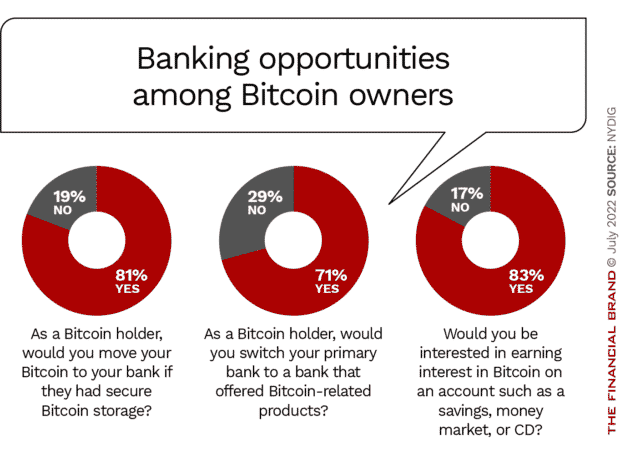 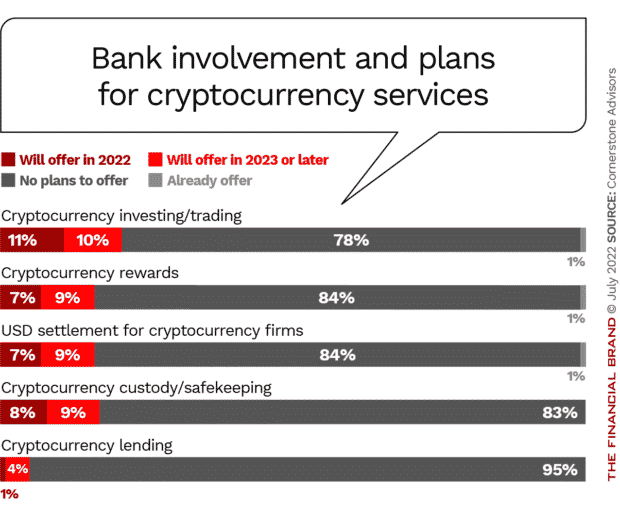 “A regulatory framework will help set expectations for what financial institutions need and lead to more informed consumers and business,” says Mancini. “There’s a myth that cryptocurrency is only used for illicit purposes. The order will ultimately lead to a safer environment for banks and credit unions to offer access to cryptocurrency markets.”

Dig Deeper: What Biden’s Crypto Executive Order Will Mean for Banking and CBDCs

Crypto: Coming to a Core Provider Near You

While many financial institutions are taking a wait-and-see approach to cryptocurrency, either not convinced of the underlying merits of the technology or wary of the significant volatility and lack of regulation, some banks and technology vendors are actively forging ahead.

For Jack Henry, the partnership allows banks and credit unions to give consumer and business accounts access to NYDIG’s buy-hold sell capabilities through its Banno digital banking platform and payments through JHA PayCenter.

Peter Glyman, a managing director at Jack Henry, says that the firm is working on its development portal to make it easier for fintechs — including those in the cryptocurrency space — to integrate into Jack Henry’s platforms. “Once opportunities occur, financial institutions can execute quickly,” says Glyman.

Read More: Banks and Credit Unions Wade Into Crypto Banking (And Why)

Banks Are Getting into Position

One institution that is going all-in with crypto is challenger bank Revolut. Launched in 2015, Revolut allows it’s 18 million customers to buy cryptocurrencies and withdraw cash proceeds back to their Revolut account. The minimum trade is only $1, but the trade does come with hefty commission fees. 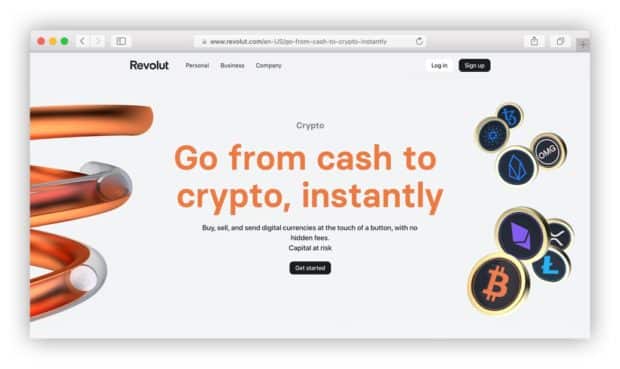 FirstBank, headquartered in Nashville with $12.5 billion in assets, is laying the groundwork to move fast when it believes the timing is right. The bank is part of the five-bank USDF Consortium, which has the goal of creating a digital token on blockchain that is issued on a one-to-one ratio to an existing dollar, explains Wade Perry, the bank’s Chief Administration Officer. The token, USDF, stands for U.S. Dollar Forward.

“If we don’t join forces with fintechs, we will lose components of our business just like we did with the advent of Venmo, Square and PayPal,” says Perry.

Perry says that FirstBank is holding back on providing cryptocurrency buy, sell, and hold options to its customers for now because he believe many consumers — and bankers — don’t understand cryptocurrency, at least not yet.

“The learning curve around cryptocurrency and blockchain is steep, and I’m not sure that most bankers could explain these concepts to customers,” says Perry. “Consumers trust banks, so we need to be careful what we put out there.”

FirstBank is taking a multi-phased approach to cryptocurrency, starting by identifying use cases and required frameworks and then building applications on blockchain that can move money around via tokenized deposits, eliminating layers of inefficient processes.

Is Warren Buffet Wrong on Bitcoin?

Warren Buffet declared at Berkshire Hathaway’s 2022 Annual Meeting that he wouldn’t buy all the bitcoin in the world for $25 because “it doesn’t’ produce anything,” as CNBC noted. But Buffet is missing an opportunity to help transform the future of currency and technology, says BankProv’s Mancini.

The true value of cryptocurrency lies in the underlying blockchain technology, the banker notes, arguing that someone with Buffet’s influence could shape this technology for future generations while keeping investors safer.

Morning Consult agrees with Mancini. In its cryptocurrency report, the firm states “Cryptocurrency owners represent an exciting opportunity for leaders in the financial services space to explore what the ‘future consumer’ looks like today.”