Subscribe Now Get The Financial Brand's FREE Email Newsletter
Buy now, pay later sales, the mainstreaming of crypto investing, and the growing use of embedded finance are not only reshaping how consumers handle their affairs but how they perceive banking. Nearly one in four Americans have money in crypto, and in some ways they represent a demographic group of their own.

Three financial trends are changing the banking business, but not always for the obvious reasons.

The three trends — buy now, pay later credit, growing investment in cryptocurrencies, and the quiet encroachment of embedded banking — share a common element: They are shifting more consumers out of traditional channels and toward new financial relationships with nontraditional players, according to research by Morning Consult.

Where banks and credit unions aren’t being left by the wayside, they are being rendered less visible, according to Charlotte Principato, Financial Services Analyst at Morning Consult. They must figure out how to adapt to these changes or how to counteract them, she advised during a webinar based on the firm’s report, “The State of Consumer Banking & Payments” states.

BNPL May Be More Than One Thing Going On At Once

Perceptions of what buy now, pay later’s growth worldwide represents vary with the observer. Certainly the major fintechs offering it have catered to a longstanding desire to have what you want now, and to pay for it over time. As one credit card banker said, “I thought that was what we were offering all those years.”

Morning Consult’s consumer research indicates that there does seem to be a displacement effect between BNPL and credit cards.

“Consumers are looking for different ways to pay and to manage their finances, as evidenced by the increased usage of buy now, pay later,” said Principato. “That’s dampened their enthusiasm for credit cards.” The two trends, credit card ownership and BNPL usage, have a mirror image relationship, she added. 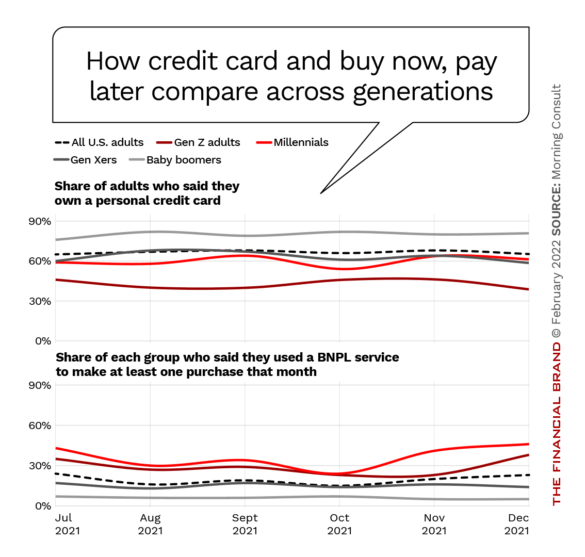 “Credit card ownership is highest in older generations and has remained pretty stable there,” she said, “while buy now, pay later is decidedly a Millennial and Gen Z phenomenon, and it is continuing to grow. But there’s also more evidence showing consumers are looking for better ways to pay beyond what banks offer. As a result, those relationships are potentially at risk.” The study also found that Gen X’s interest in BNPL is growing as well.

Principato said that her research indicates that BNPL is not being used as much for impulse buys as many believe.

“Consumers seem to be making considered decisions when they choose to use buy now, pay later. People using BNPL are more likely to say that they are using it to smooth out their finances.”

Reports from different sources have differed markedly regarding how well consumers are handling BNPL plans. Principato said that her firm was adding questions about late BNPL payments to its ongoing research to see how well that debt is actually being managed.

Struggles with managing bills and debt are being seen in other areas of consumers’ finances as well. During the webinar Principato noted that the firm’s research found that more consumers are overdrawing their bank and credit union accounts, with Millennials representing the bulk of the activity. She noted that while Millennials aren’t all alike, many continue to be walloped by broad economic trends including lingering effects of the Great Recession and the pandemic.

Paradoxically, growing use of overdraft to manage bills has developed concurrently with the growing trend of financial institutions to eliminate or liberalize overdraft services. The percentage of Americans who lack savings to pay basic expenses for a full month shot to 29% in January 2022 — up over six percentage points from the previous month, according to Morning Consult data. This deterioration relates in part to termination of expanded federal unemployment benefits in latter 2021.

Crypto Is More Mainstream Than You Think

Nearly one in four people in Morning Consult’s global survey own some form of cryptocurrency. U.S. consumers in that research came in about the same, 24% owning some crypto. But what was especially significant was how this compared to a key deposit product — 23% of the U.S. sample own CDs.

Morning Consult’s research found that crypto ownership is growing among many segments of U.S. consumers, though ownership by women has fallen somewhat, as has ownership by Gen Xers. (The gender split in late 2021 was 70% men, 30% women.) 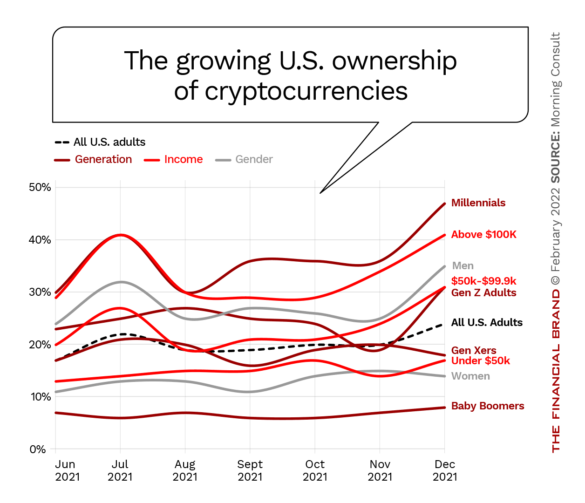 “I think it’s fair to say that crypto is mainstream and part of the general consciousness,” said Principato. “When we look at which adults are driving most of this growth in cryptocurrency, it is, frankly, the ‘crypto bro’ stereotype — men, Millennials and high-income earners are more likely to report household ownership of cryptocurrency, though ownership has become more homogenous over the past several years.”

However, “crypto bro” is not the whole picture. She pointed out that nearly 40% of crypto owners are from households making under $50,000 annually and that 30% are Gen X or Baby Boomers. She added that crypto owners are more ethnically diverse than the general population, notably a large share that is Hispanic.

Principato made a case for treating all crypto owners as a demographic group, in spite of some of the dominant factors mentioned. As a group crypto owners tend to use multiple traditional financial institutions more often than all adults. They also tend to use more alternative financial services like check cashing and payday loans. 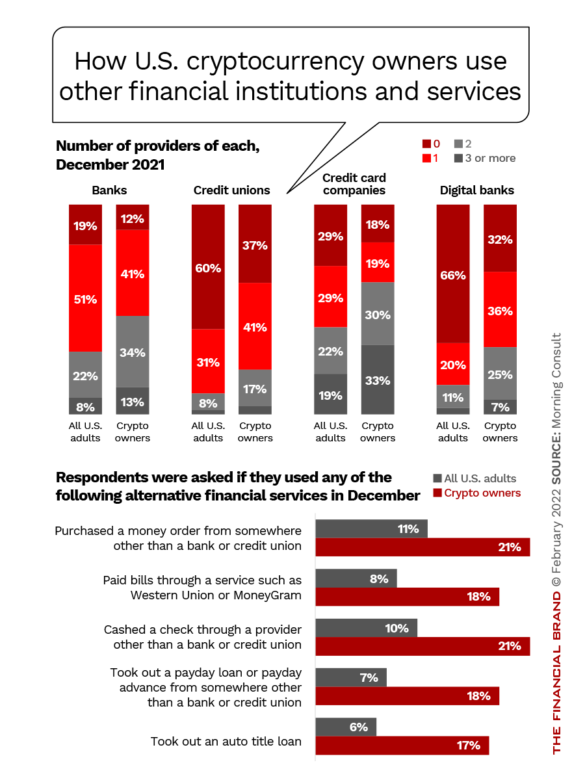 In part this reflects the influence of Millennials with money issues, said Principato, but there also seems to be a desire for convenience and immediate access to money even when the services are more expensive.

Crypto owners in general are open to all sorts of financial services, said Principato. “What’s really important to them is access, regardless of who it’s from.”

Principato suggested that no matter how a banker or credit union executive felt about cryptocurrency, it is critical to understand the gaps that crypto owners see in traditional financial services and how they attempt to fill those gaps. She noted that crypto owners are much more likely to use digital banks than are members of the population as a whole. In addition, Morning Consult research indicates that acceptance of crypto is increasing consumer interest in brands that are identified in some way with cryptocurrency.

This underscored two points of advice from Principato.

First, she recommends preparing bank and credit union employees to talk about crypto with consumers, especially as interest grows and as advice is sought. Second, she recommends developing internal resources to exploring opportunities in crypto.

“Those that continue to watch from the sidelines will fall further behind,” the report warns.

Read More: How Banks Will Mint Their Own Stablecoins

Will Embedded Finance Turn Out to Be the Biggest Trend of Them All?

While BNPL obviously competes with credit cards and cryptocurrency is a mixed bag in terms of competition, Principato said that the biggest game changer may turn out to be embedded finance. By this she means banking functions so much a part of consumer transactions that the provider becomes virtually invisible. (Embedded finance can also include forms of financial services included within another financial service, such as a digital wallet.)

Invisible Except for the Bills:

Anyone who has taken an Uber ride — about 40% of Americans — has used embedded finance to pay, yet only 11% of consumers surveyed have heard the term.

A sampling of the usage of services that Morning Consult classifies as embedded finance, from the firm’s research:

“Consumers can expect greater opportunities for embedded credit and lending, as well as insurance and investment, as nonfinancial services companies across industries build or buy the capability to offer these services,” the report states. Principato expects even the less-common activities to grow in use in the near future.

The analyst sees a twofold challenge for traditional institutions.

First, because embedded finance happens outside of a usual banking context, the financial provider is invisible to the consumer. This means that any opportunity for brand recognition and building more business on that recognition can be lost. The solution lies in stepping up the volume, which may not always be doable,, or finding a way to regain visibility and provide linkages to the consumer.

Who Benefits from Embedded Deals?:

The banks that provide Amazon-branded cards enjoy favored access to a huge base of potential transactions, but those giants are exceptions in the industry.

Principato highlighted representative brands from her database to demonstrate that use of embedded banking is creeping past use of some big banks directly. 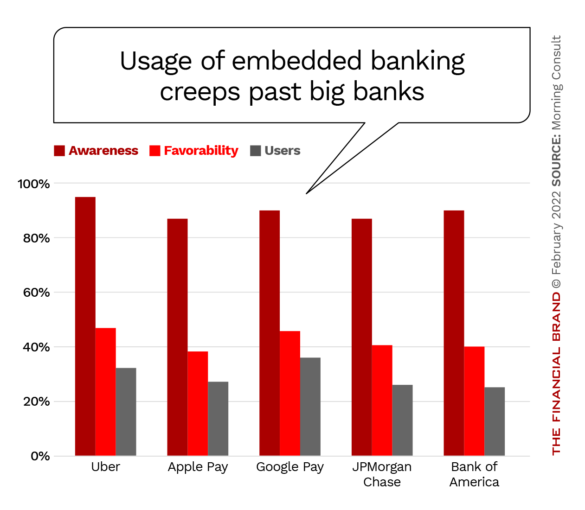 A second challenge for banking brands is that as more financial functions and relationships become buried in other processes, consumers will become less adept at dealing with them. This will also make it harder for traditional institutions to maintain their place in people’s lives, unless they can find ways to stand out by providing financial advice and guidance. Increasingly, Principato added, this will have to be in digital channels rather than in a traditional face-to-face context.

“In a world where it’s easier than ever to spend, financial services providers can play the role of holistic adviser,” the report suggests, “giving consumers a complete picture of their finances in relation to their goals.”

A third option, which Principato thinks belongs to fintechs right now, is establishing super apps where the financial provider controls the platform.

“Nobody in the U.S. has nailed this down yet,” she said.