Subscribe Now Get The Financial Brand's FREE Email Newsletter
Following the lead of Square and PayPal, which pay cash-back rewards in Bitcoin, a New York-based digital retail bank is the first to offer a Bitcoin rewards checking account. The bank firmly believes the cryptocurrency is a long-term asset, and that its price volatility will diminish as more people get in the market. The rewards plan helps consumers get into crypto without risk, while bringing the bank new accounts.

Quontic is a good candidate to buck conventional thinking. Converted into a for-profit Community Development Financial Institution (CDFI) from a traditional community bank in 2009, Quontic bills itself as the “Adaptive Digital Bank.” Largely forsaking branches, the bank has transformed into a digital-only bank operating nationally. 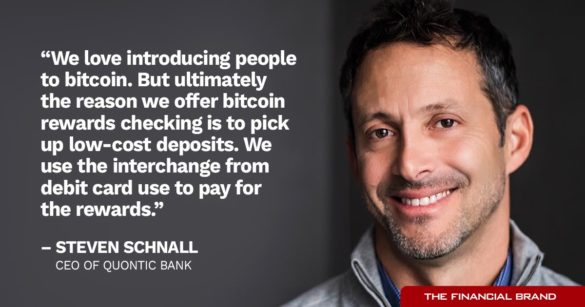