Subscribe Now Get The Financial Brand's FREE Email Newsletter
As rates continue to rise at a pace not seen in the last 20 years, CDs are not the only (or best) deposit option. Here's how community financial institutions can grow core deposits at a lower cost than competitors who depend on funding sources more sensitive to interest rate risk.

The Fed has been aggressively raising rates since March in an attempt to slow consumer demand, cool the economy and bring historic inflation numbers back down. Speculation suggests that the Fed may continue on this path, as price increases have proved surprisingly stubborn.

Anticipation of additional rate hikes is creating demand for rate movement on deposit products. However, while mid-term, rate-sensitive instruments such as certificates of deposit may have worked in other eras, today’s unprecedented circumstances call for growing core deposits. Taking a closer look at the advantages of high-yield reward checking accounts — and their unique cost-of-funds (COF) discount — could be a key strategy to reducing fragility in your deposit portfolio.

As of September 2022, some of the best-known national institutions were offering attractive rates for savings or CD products and as rates continue to rise, we can anticipate that the competition will continue to raise their rates and run CD specials. Here are a few examples:

High-yield reward accounts typically promote some of the highest deposit rates available to consumers. In the current rate environment, the products appear to pay premium rates — enticing consumers to move their existing checking accounts (along with their non-interest income and longevity) and consolidate their long-term CDs.

More consumers are considering high-yield checking reward accounts, which are offering higher returns than some CDs.

For example, here’s how the APY of one high-yield checking account, Kasasa Cash, compared to a typical 1-year CD in September 2022:

Where it gets interesting is that the true cost of funds for high-yield reward accounts is dramatically lower than the promotional rate, unlike CDs where the cost of funds is equal to the promoted rate.

The Advantage Grows as Rates Rise

Reward checking accounts are the only major deposit products that enjoy this significant COF discount — an advantage that is often overlooked. Even more noteworthy, this advantage increases as rates rise. Reward accounts already pay rates that consumers perceive as premium, and the inherent advantages of these accounts allow community financial institutions to price promotional rates further out on the yield curve.

Assuming an institution keeps the same promotional rate and balance cap and those account holders qualify at the same rate, simple math demonstrates reward checking has a growing advantage as rates rise as shown below. 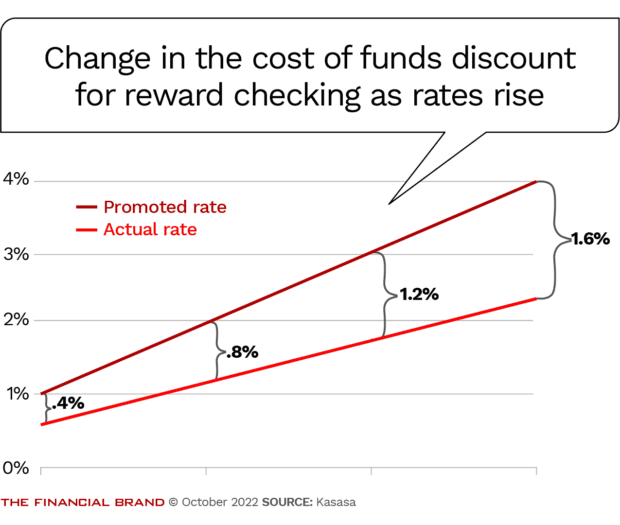 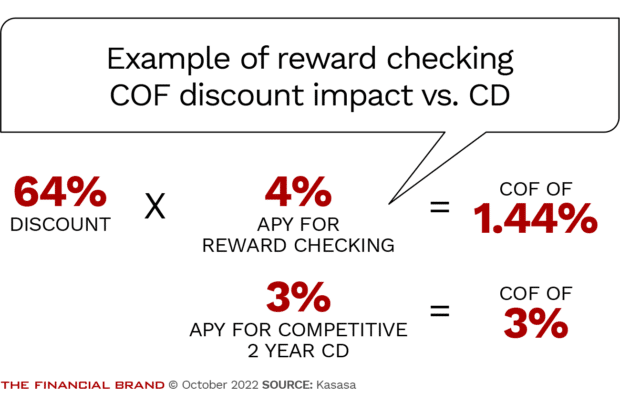 Since competing products like CDs and money markets enjoy no discount, the COF savings with a reward checking account offers a funding advantage in an economic environment where rates are rising.

A community bank or credit union with a deposit mix that includes a sizeable reward checking base has a major competitive advantage over those that do not. The COF discount and non-interest income associated with reward accounts enable community financial institutions to price their accounts farther out on the yield curve, retaining current deposits or attracting new deposits that would otherwise go elsewhere.

Reward checking combats interest rate risk by reducing the margin compression of more traditional deposit products as rates go up, as shown below. 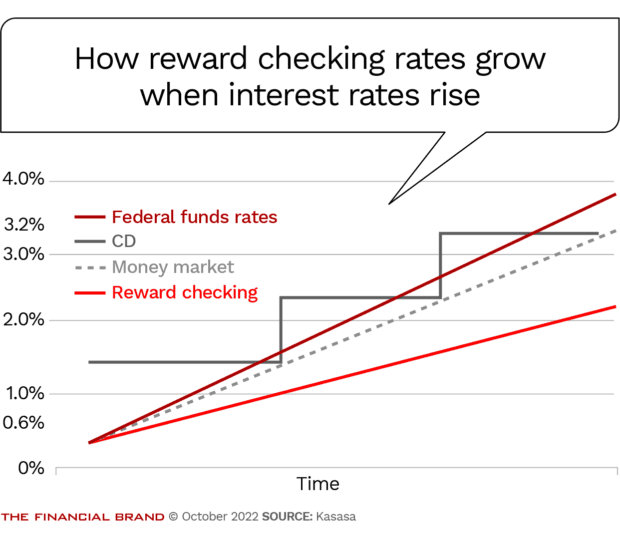 A focus on short-term risk can lead to the belief that CDs will help mitigate longer-term interest rate risk, but comparative modeling shows that this is not the most advantageous approach. As rates rise steadily over a period of time, the 2-year CD rate eventually rises as well, with a sharp jump once it reprices. A reward checking portfolio may reprice more quickly than CDs, but in the long run, it will actually result in widening margins as rates rise.

Regardless of your particular appetite for credit risk or ability to deploy funds into assets, any COF below the Federal Funds rate represents a return that is essentially risk-free (through a lower interest rate paid on accounts than earned on overnight loans to other institutions). This added income operates as yet another hedge against interest rate risk.