Subscribe Now Get The Financial Brand's FREE Email Newsletter
Having a top ten U.S. bank pull the plug may not be a mortal blow for the controversial fees. Experts contend that even with the fees, the service adds value for consumers who need it. But business as usual is over for overdrafts. Washington is seizing the opportunity to take action.

With the announcement by Capital One that it will be eliminating overdraft and non-sufficient funds penalties, the future of these much-maligned fees in the banking industry has reached a critical juncture.

The $425 billion-asset Capital One becomes the largest bank to eliminate the fees, and follows smaller institutions, such as digital-only Ally and Alliant Credit Union, as well as most fintech neobanks, in making such a move.

Beyond outright elimination of fees, a growing number of institutions have introduced programs to reduce the cost of overdraft/NSF fees. PNC’s Low Cash Mode, Bank of America’s Balance Assist, along with programs from Huntington Bank, Chase, Regions and others have all been efforts to change the nature of overdrafts.

The debate about overdraft fees — which raked in more than $30 billion for financial institutions in 2020 — has been intensifying for years, with many saying they disproportionately harm the financially disadvantaged and lower income consumers. They also generally draw the ire of consumers. As previously reported by The Financial Brand, a survey by Morning Consult found that 52% of adults believe overdraft fees are an unfair penalty on underprivileged consumers.

According to Capital One, customers will continue to have access to overdraft protection, but from now on the service will be free. The bank’s announcement stated that “All customers currently enrolled in overdraft protection will be automatically converted to No-Fee Overdraft on the launch date in early 2022. Eligible customers who are not currently enrolled can enroll at any time. For customers not enrolled, transactions that would overdraw an account will be declined and no fees will be assessed.”

Who would be “eligible” was not spelled out beyond “those with regular accounts,” as CNBC reports.

Capital One says it does not plan to replace the lost revenue from overdraft fees in other places.

“We have long been committed to supporting our customers and recognize that unexpected expenses occur from time to time. By making changes to our overdraft and non-sufficient fund (NSF) fee policies, we are providing customers with an opportunity to better manage their cash flow and course correct when needed,” said Jill Kerr, of the corporate communications department for Capital One, in response to questions from The Financial Brand.

Though fees are a key revenue generator for banks, Capital One does not plan to make up this fee revenue in another way, Kerr added.

Some research also shows that bank customers would be willing to switch providers to avoid fees. A 2021 survey published by Insider Intelligence found that just over three in five consumers would be very or somewhat likely to change banks in order to avoid service or overdraft fees. 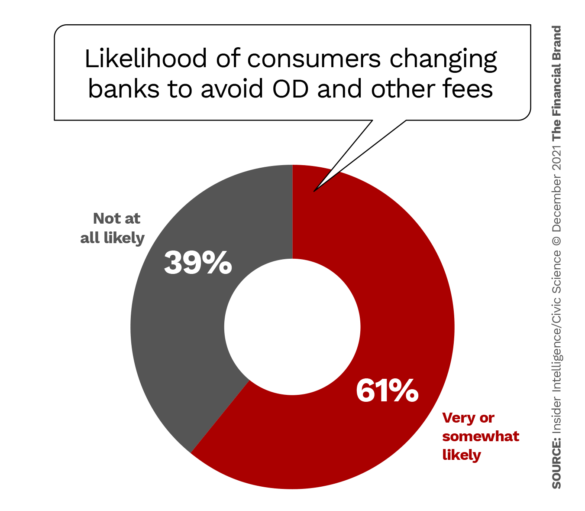 Capital One’s move are expected to lead to increased calls from regulators and Congress to eliminate overdraft fees.

On the same day as the bank’s announcement, the Consumer Financial Protection Bureau said it will be enhancing its supervisory and enforcement scrutiny of banks that are “heavily dependent on overdraft fees.”

“Rather than competing on quality service and attractive interest rates, many banks have become hooked on overdraft fees to feed their profit model,” said CFPB Director Rohit Chopra, in a statement. “We will be taking action to restore meaningful competition to this market.”

“Previous CFPB research has shown that overdraft presents serious risks to consumers,” the statement continued, “with under 9% of consumer accounts paying ten or more overdrafts per year, accounting for close to 80% of all overdraft revenue.

Capital One’s move has further emboldened legislators to call for the elimination of overdraft fees.

Several days after the CFPB announcement, the FDIC released data revealing that insured banks earned $69.5 billion in the third quarter of 2021, up 36% from the prior year. Banks are on pace to surpass their pre-pandemic profitability.”

Many industry analysts believe Capital One’s move and the increased regulatory attention will lead to pressure for other banks to do the same.

“I don’t think the pressure will come from the competitive side, but it is certainly going to come from the legislative side, and quite possibly the regulatory side as well,” said Greg McBride, chief financial analyst for Bankrate, in an interview with Yahoo Finance.

Counterpoint to the No More Fees Argument

“Regulators have already made joint announcements encouraging financial institutions to make small-dollar short-term loans using cashflow data derived from consumers’ accounts,” Leonard says. “We believe there will be continuing pressure on banks to do so both from regulators and the market.”

Consumers who need access to short-term liquidity will also likely still want access to overdraft protection, adds Leonard. No amount of regulatory pressure alters that fact, he maintains, nor the fact that consumers receive benefits from overdraft protection and few users complain about the service.

Still, Leonard believes many financial institutions “could be more responsible in ensuring that only those who have the ability to repay the overdrawn balance and the associated fees are able to utilize the service.”

High-cost overdrafts will be squeezed, causing financial institutions to increasingly roll out alternatives.

A statement from the American Banker’s Association in response to the CFPB’s heightened regulatory scrutiny of overdrafts also sheds some light on how financial institutions view overdraft fees.

“Banks remain committed to ensuring their customers understand and make informed choices about their overdraft options,” says ABA president Rob Nichols in the statement. “Under federal rules, customers can only receive debit card and ATM overdraft protection by opting in, and they can opt out at any time.”

The ABA survey appears to contradict the one cited earlier, conducted by the same research firm. However, the more recent study focuses on consumers’ views of their own bank’s policy, versus banks in general. The divergent result could be similar to the oft-encountered finding: “Banks are horrible, but I like my bank.”

Despite the waves from Capital One’s move, it still remains a longshot that the majority of banks will immediately follow suit, Velocity’s Leonard maintains.

“We do not believe that many financial institutions will follow Capital One’s recent move,” he states, “because eliminating overdraft fees means that banks will scale back the total amount they will cover for consumers since they no longer are being compensated for the charge-off risk.”

He does expect to see more banks adding the option of short-term, small-dollar loans as an alternative to overdraft. In addition, banks and credit unions will be eyeing other approaches such as those taken by PNC, Huntington and Frost Bank that do not eliminate all overdraft fees, but give the consumer more options.

While overdrafts and overdraft fees may not disappear, the game clearly has changed significantly and will no longer produce the same revenue stream it once did.