Subscribe Now Get The Financial Brand's FREE Email Newsletter
Many younger consumers have never written a check, and probably never will, yet their checking accounts remain a primary hub for them. As new technologies and apps lead consumers to use these accounts very differently, banks and credit unions need to rethink their checking strategies, especially how they generate revenue.

Now that checks have become the payment method of last resort for most consumers, many industry observers argue the term “checking account” is a misnomer and that these accounts — at least as we have known them — will no longer exist in the coming years.

While checking accounts remain central to consumers’ lives, they’re now far more driven by mobile devices and digital functionality than actual checks, which even older consumers now use only infrequently.

“Younger consumers are less wedded to the term of ‘checking account’ and think of it more as a ‘digital access account,’” says Mark Hamrick, Senior Economic Analyst at Bankrate.com. “Within five to ten years, I think we’ll be calling it something else.”

Stuck with a 20th Century Name:

More important than what checking accounts will be called is the challenge of how to create more value for consumers from these accounts.

“Checking accounts as the foundation for writing checks has never been less relevant,” observes Jim Marous, CEO of the Digital Banking Report and Co-Publisher of The Financial Brand. “Yet, the need for a service that provides storage of funds and a portal for payments, with a savings/investment component, is still needed,” says Marous. “What we call it really doesn’t matter.”

Consumers have historically used their checking accounts as the primary means to perform the majority of their financial activities, typically keeping just enough of a balance to cover expenses for a month or two.

Yet the rise of new payment options and the greater ability to quickly move money around is leading the traditional check to the brink of obsolescence. The use of checks sharply declined from 42.6 billion check payments in 2000 to only 14.5 billion in 2018, with the average consumer writing just 3.3 checks per month, according to the Federal Reserve. Those numbers have likely fallen even further since the start of the pandemic.

Still, most consumers continue to use checking accounts, only now in different ways and for other reasons. The growth of digital payment and banking options has led to a “hub and spoke” financial system with checking accounts serving as the hub, Bill McCracken, President of Phoenix Synergistics, tells The Financial Brand. The checking account is now less of a holding place and more of a transit point and intermediary to integrate with other accounts and fintechs, he says.

Still at the Center of Money:

'Hub account' doesn't have much of a ring to it as a name, but that's what checking has become. Building on that functionality is bankers' challenge.

For example, a consumer may now get paid via ACH, then make payments with Zelle and Venmo and have a series of auto withdrawals established for bill payments and automatic savings or investment apps. “You have funds hitting the account, but in many cases immediately going out on these spokes towards a variety of different purposes,” McCracken explains. “The checking account is still very functional and at the heart of the consumers’ life, but it has a different definition.”

“It’s more of a vehicle for moving money than for writing checks,” agrees Paula O’Reilly, Senior Managing Director, Accenture. She adds that “even as we have moved to a more mobile and digital environment, people still move money from their checking account, even though that name is now a bit of a misnomer.”

Read More: Why Chime Should Keep Bankers Up at Night in 2022

Whatever they may be called in the future, checking accounts remain a primary account for consumers across all demographics. Approximately 80% of adults say they have a checking account with a bank or credit union, according to a Bankrate survey.

Despite the growth in new apps and platforms, checking accounts remain the primary repository for consumers across all generations, says Mark Hamrick. Even consumers that rely heavily on platforms like PayPal and Venmo often have it tied to a checking account or debit card.

“We’ve seen a tremendous amount of innovation in recent years, but the fact that these accounts are still held among majorities of age groups is quite noteworthy,” says Hamrick. “It remains the primary account.”

Another notable finding is that consumers said they have used the same checking account on average for 17 years. As to why, 17% said it was the “account I’ve always had,” and 10% said it was “too much hassle to switch.” Not exactly a ringing endorsement. In addition, a quarter of consumers said they are loyal and stick with the same account because of low or no monthly fees. 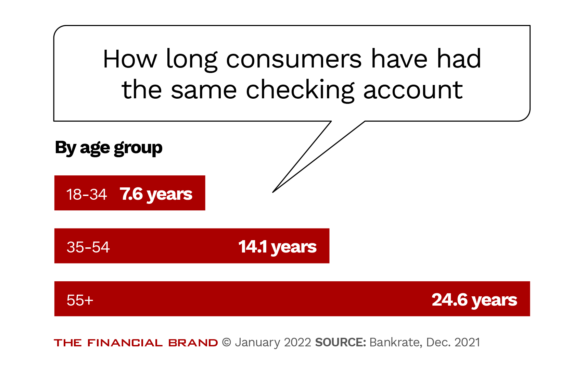 If that account longevity trend were to continue, it would mean that even as checking accounts evolve, they’re likely to remain a primary tool for attracting and retaining long-term customers. Time will tell whether the youngest user group will feel the same when they are 50+ as people in that age bracket currently do. 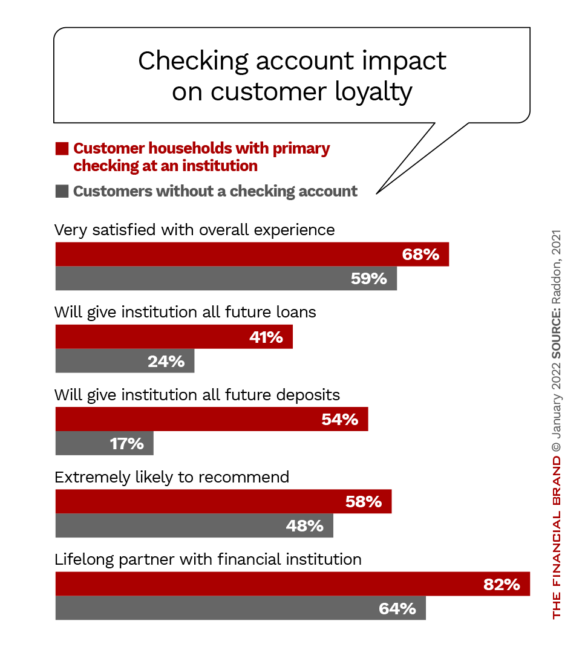 A New Focus on Fees and Value

Checking accounts remain an important revenue source for many financial institutions, according to data collected by Raddon’s Performance Analytics program. At the end of 2019, checking account and interchange fees made up 86% of the overall net income for the average financial institution. Yet this is quickly changing due to downward pressure on overdraft and NSF fees and on monthly charges. Government regulations and industry moves — led initially by neobanks, but now by large banks — are making checking fees less viable.

Meanwhile, the idea of charging for checking is quickly going out the window. Nearly half of all non-interest checking accounts are now free, the highest level since 2010, according to Bankrate’s annual checking survey. In addition, smaller balances in the accounts means less opportunity to generate revenue on the spread, McCracken observes.

Jim Marous believes it’s time for banks and credit unions to look beyond expecting the checking customer to support checking services. “While there is the potential of adding value for a fee, it is also possible to generate revenues from third parties who would like access to the customer base of financial institutions,” he believes.

The long-term decline of fee-based revenue is spurring creative thinking, including third-party partnerships and new value-add offerings, some of which are very 'unbanklike'.

Two examples Marous points to are Caixa Bank and Emirates NBD. Both have created services for younger consumers that provide a transactional hub, but add value with music, technology, gaming, social interaction and other services from outside providers.

Even in a hub and spoke system, what is most important is where incoming direct deposits go, says Accenture’s Paula O’Reilly. Forward-thinking banks and credit unions can leverage their trust and infrastructure to capture more opportunity in the hub.

She points to new innovations and partnerships with fintechs as a promising means for banks to offer more value in the checking account space. Many financial institutions are also focusing on faster account opening processes and a “mobile-first” strategy to improve the checking account experience.

“Even if we renamed these accounts, where your direct deposits go is still going to be the primary transactional account,” O’Reilly believes.