Subscribe Now Get The Financial Brand's FREE Email Newsletter
Traditional financial institutions' eyes are programmed to turn toward the 'Walmart menace,' but they shouldn't miss the rapid growth of fintech/neobank Green Dot, whose GO2Bank may point to what the new MoneyCard will become.

When Walmart and Green Dot jointly announced that they were turning the Walmart MoneyCard prepaid product into a demand deposit account, the banking industry’s eyes tended to focus on Walmart, given the mega retailer’s longstanding interest in entering banking, stoked by formation in the early 2021 announcement of a fintech venture with Ribbit Capital.

Just out of the limelight, however, is the other party to the MoneyCard: Green Dot is a hybrid, both a fintech as well as a bank holding company by virtue of its owning Green Dot Bank, acquired and renamed in 2011.

Walmart, which owns some special class shares in Green Dot, is Green Dot’s largest retail distributor. Besides MoneyCard, which goes back to 2006, this includes Green-Dot-branded prepaid cards and its own GO2Bank digital banking product. Green Dot issues the Walmart MoneyCard and handles support functions from website functionality to compliance to customer service. (Green Dot is one of the handful of institutions taking part in the Google Plex project.)

Walmart receives a commission for this relationship, but the deposits — and the income from multiple fees — belong to Green Dot Bank. All told, in 2020 Walmart accounted for 27% of Green Dot’s operating revenue. Indeed, in 2019 the two companies formed TailFin Labs LLC, another fintech accelerator, 20% owned by Green Dot, though little has been heard since about that entity either.

Much of what the two companies announced plays more immediately into strategies Green Dot discussed during its first quarter 2021 earnings conference call. Walmart has been noticeably quiet about financial services in earnings calls and investor presentations in the same period.

In fact, Walmart’s interest in the MoneyCard changes may have little to do with its banking ambitions, insists Ron Shevlin, Research Director at Cornerstone Advisors. Shevlin has made extensive studies of consumer appetite for accounts offered by fintechs, big techs and others. He insists the latest move is ” not about competing with banks. It’s about competing with Amazon, Square and Shopify.”

Jim Marous sees the latest move as an ecosystem maneuver.

“There is a strong desire by many large players to create an integrated platform that focuses on increased engagement. If Walmart can increase ongoing engagement in retail and financial services, there is no reason why they can’t also expand into some form of telecom, financial education/wellness, lending, payments and even entertainment play.” Marous is Co-Publisher of The Financial Brand and CEO of the Digital Banking Report.

Taking a Closer Look at the New Walmart MoneyCard

Walmart and Green Dot went into the announcement with a MoneyCard program that was already over one million card holders strong as a prepaid offering.

Prepaid cards represented the first and easiest means for fintechs to wade into banking services, according to Eric Sprink, President and CEO at Coastal Community Bank, a player in the banking-as-a-service business. He sees the two companies’ move as a natural progression, especially given Walmart’s longstanding hopes of getting into banking. “You knew this was coming for a while,” says Sprink.

As a reloadable prepaid card, MoneyCard received somewhat qualified praise from financial comparison sites. Among its features were (and are) cashback at 3% on Walmart.com purchases and 1% on Walmart purchases. 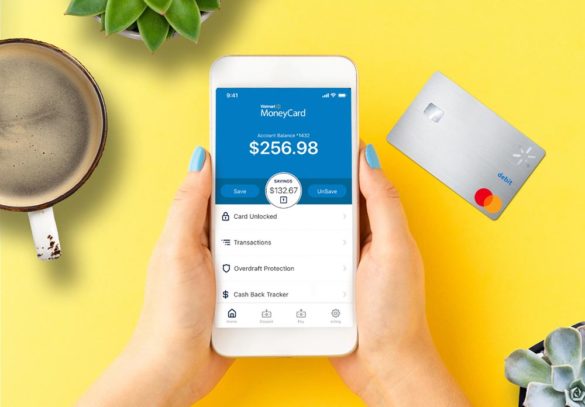 “The Walmart MoneyCard prepaid debit card can be a good value for dedicated Walmart customers,” wrote NerdWallet. CNBC Select “reviewed dozens of prepaid cards and found that the Walmart MoneyCard is the best choice for Walmart shoppers and families who want to take advantage of cash-back rewards on everyday goods and fuel.” The Points Guy, noted that the card was a good choice for people who couldn’t qualify for credit cards or who didn’t want them. The site also pointed out the card’s fees, from 50 cents for an ATM balance inquiry to a monthly fee of nearly $6 unless more than $1,000 had been loaded in the previous period.

Under the new program prepaid accounts automatically became demand deposit accounts, according to a Green Dot spokesperson. Cardholders could opt-out if they wished. The June 2021 announcement promised “a more comprehensive digital banking platform similar to a traditional banking account.” Accounts can be managed digitally or in person at Walmart’s 4,500 stores or Green Dot’s 90,000 retail distribution locations. Accounts can be originated online or using a starter card off the card rack at Walmart stores.

Additionally, a related savings account continues to be available, with a 2% APY for up to $1,000.

The companies promise more to come. Asked for more detail, the Green Dot spokesperson stated, “We can’t speak specifically to the product roadmap, but have many plans in development that we are working on with our partners at Walmart.”

Clearly, says Shevlin, “one goal of the conversion of the MoneyCard from prepaid card to checking account is to get people to make it their primary account.” He sees the renewed effort as a play towards the segments served by fintechs like Chime and Dave. As evidence, Shevlin cites the new, relatively low direct deposit requirement to qualify for a waived monthly fee and the relatively low overdraft fee should the balance not be high enough.

Jim Marous thinks there will be little shift of primary banking relationships to the new MoneyCard accounts until a strong customer experience advantage is demonstrated.

“Consumers who have shifted their primary financial relationship to the biggest neobanks have done so because they had no problem with forgoing the branch and believed the overall experience was better at the new institution,” says Marous. “Until all of the pending MoneyCard features and benefits are introduced, shifting of primary relationships usually won’t happen.”

Right now the chief interaction point for physical customer experiences are Walmart stores themselves and Walmart Money Centers. That’s not necessarily an advantage, according to Shevlin.

“The locations have already helped drive significant adoption of the MoneyCard, so they won’t play more of a role in a shift to a checking account. But checking accounts tend to have more support interactions than a prepaid card does. This may require Walmart to staff up some of their stores with more highly trained banking staff.”

Marous suspects that there’s more behind the shift to a banking account than meets the eye. Some new services, such as a “buy now, pay later” option could be added. Walmart already provides Affirm BNPL service at checkout in stores and online, but it maintains multiple financial and payment relationships already. Marous also thinks a small “bridge” credit line could be created to help consumers over potential overdrafts. “Just in time for the holidays,” he quips.

In a brokerage report Citigroup stated, “while much has been made about the competitive threat of challenger banks/neobanks to the traditional bank business model, it’s our view that a competitive threat such as WMT [Walmart’s stock symbol] is likely a more potent one.” Citigroup suggested that Walmart might even be thinking of a “superapp” that would encompass shopping, finance and potentially more.

Shevlin agreed with the latter point in his Forbes blog, where he had predicted a Walmart superapp. It underlies his earlier point that the MoneyCard development isn’t mainly about banking.

“Walmart’s competitive reference points are Amazon, Square and Shopify: large platforms whose growing market power — in terms of retail and payments — represents a threat to Walmart’s relationships with it customers and providers,” wrote Shevlin. “Walmart’s decision to convert the MoneyCard from a prepaid card to a checking account is about deposit leverage — i.e, the ability to lend and do other things with the money that the company can’t do today.”

But Where Does Green Dot Fit Into the New MoneyCard Picture?

As huge as the one million cardholders in MoneyCard are, they only represent a fourth of Green Dot’s consumer business segment. (This includes business generated through Walmart, CVS, Kroger and others, as well as direct business with consumers. It also includes its own GO2bank accounts.)

In terms of Green Dot’s operations, Walmart is a one contributor to a big pot of business. What’s being introduced for the new MoneyCard looks a good deal like what is being done with the GO2bank accounts, which may provide some clues to the future direction of MoneyCard.

Dan Henry, CEO and President, may have given a preview of what other features could be added to MoneyCard when he spoke of GO2bank during a first quarter 2021 earnings call he:

“It’s not a prepaid card. It’s a bank account. If you take this account and you sign up for direct deposit, you’ll have no fee on this account. We’ll give you up to $200 of free overdraft protection. We’ll have additional features here of a secured credit card to where you can build credit, other tools to where you can build your credit score, a pathway to traditional credit products, all wrapped up into this GO2bank account. We intend to offer other solutions such as investment tools that consumers can easily access, not to mention great customer service. Maybe even some buy now, pay later solutions are all on the road map.”

Henry added that prepaid cards have been issued for low-income consumers’ access to paychecks. But now, he said, the message is changing to “Here is a bank account issued and offered by the financial institution who has truly embraced the low-to-moderate income consumer, and we’re going to serve you and meet your needs.”

Green Dot estimates that over 100 million consumers in the U.S. live paycheck to paycheck and could benefit from the company’s approach.

Henry said he has found that when consumers have designated an institution to receive their direct deposits, “they’ve made this their primary bank account. And we know that those customers will stick with us for years.”

The executive said that adding “consumer-friendly overdraft” to interchange and ATM fees can be quite profitable.

“We can deliver a customer that would deliver to us a monthly contribution of somewhere between $15 and $20 a month,” said Henry. Including other revenue from account holders, he estimated, would produce $240 million in additions to revenue per million accounts.

Henry pointed out that while the Green Dot retail network “may not be the choice banking channel for high net worth individuals, these retail locations are some of the most important destinations in the daily lives of the more than 100 million low-to-moderate income consumers in America.”

Green Dot’s consumer segment is growing at double-digits, Henry concluded, and “growing faster than many of the most popular neobanks in the market today.”