Subscribe Now Get The Financial Brand's FREE Email Newsletter
Already deeply committed to digital banking, Solarity Credit Union's board knew the pandemic was an opportunity to double down. Transformed branches and a strategy of customer training as well as staff training, helps the institution survive in a world of Chime and megabanks.

It could be the end of the cross-sell ratio in banking — or “products per member” in credit union terms. For all but the largest financial institutions, the “full-service” model of banking may be on the wane as a viable strategy.

Not every community or midsize bank or credit union may agree with that conclusion, but the leadership of Solarity Credit Union most certainly does.

“The concept of a ‘primary financial institution,’ something we all aspired to be, has gone by the wayside,” states Mina Worthington, President and CEO of Solarity Credit Union for the last 13 years. “The reality is that the consumer of today — and of the future — has more of a fragmented banking relationship. They have a checking account here, a credit card there, a money market account over here.”

Several factors are driving this trend, chief among them consumers’ embrace of digital banking and e-commerce. The digital technology enabling those functions also makes it much easier for consumers to pick and choose financial products from among an ever-growing array of providers. And, of course, many of those providers are mobile-powered fintechs, big tech companies and neobanks.

“I don’t think we should assume that banking is an intuitive thing for people. It’s kind of like health care – very private, very personal, and kind of voodoo . “

Worthington, who worked at National City Bank as well as several other credit unions before joining Solarity, isn’t as worried as she once was that Chime and others like it will dominate retail banking. Such options appeal to many people, but often for a fairly limited purpose.

Shunning the ‘All Things’ Strategy

“People probably want to hear me say that our competition is Chime and all these other digital players. But I don’t think that’s the truth. Our competition is anybody who is a community player,” Worthington tells The Financial Brand.

That may sound “retro” to some, but it’s anything but. For several years, Solarity has been upping its digital game. This includes completing the transformation of its six branches into tellerless consultative facilities, along with the ability to handle mortgage closings remotely.

Worthington recognizes that a credit union with total assets of $838 million and a marketing budget of $5 million can’t presume to compete head-to-head with Chime, much less one of the megabanks.

But the CEO has a clear idea of what’s required for a small community institution to remain an option for consumers and small businesses in its markets. Based in Yakima, Wash., Solarity’s 56,000 members come from all over the state. While the credit union still tracks products per member (PPM), she says, increasing that number to four or five isn’t the goal anymore.

Getting all of a customer’s business just isn’t feasible now, Worthington explains. “Consumers don’t think that way anymore because they have so many options.”

“Our approach to the new competition,” she says, “has been to ask, ‘What are we doing really, really well? And how do we do more of it?'”

In Solarity’s case this would be, first, home loans, where they have transitioned to a direct-to-consumer model. Second, Worthington considers Solarity’s checking account to be in the same category because even though checking is a commodity “we have a good debit card and good online and mobile banking platforms, making it easy to do checking with us.”

The third line of business they do well is multifamily residential. “We are one of the preferred lenders in the Pacific Northwest for that,” the CEO states.

That said, Worthington is always looking for opportunities to partner to grow the business.

Early Jump Into Digital Pays Off

Solarity was early in recognizing the importance of digital technology, having seen steady declines in its branch transactions for years before the pandemic hit. For example, in 2015 the credit union piloted a small, tellerless branch (initially called an Engagement Center) using smart ATMs and video conferencing.

The shift to digital went beyond that pilot and beyond online and mobile banking, however. With the growing importance of mortgage lending, Solarity rolled out remote online notary and digital closing capabilities using video technology to share screens and accept signatures.

“People would much rather meet with you via video than get in their car and have to drive to you and find parking, especially in metro areas,” Worthington observes.

Despite the success of what they’ve done digitally (and the success of neobanks), Worthington believes the future of retail banking is not all technology, but a combination of properly trained people and technology.

It’s an expensive proposition, she adds, but there’s no way around it if you want to remain relevant.

Read More: Why Are So Many Credit Unions Now Buying Banks?

All Branches Have Been Transformed

As with most traditional financial institutions the pandemic greatly reduced branch activity at Solarity.

Rather than resisting that, because of its investment in branches, the credit union’s board decided it was the perfect opportunity to help members change their behaviors in a way that benefits them. They began a program of actively educating members about the advantages of digital banking, knowing it would further accelerate the decline in branch traffic, which it has.

At the same time, building on the success of its pilot Experience Center, management opted to convert all five of its traditional branches to the same format. 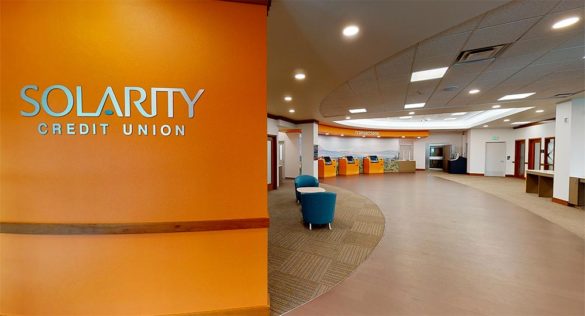 The credit union dropped the name “Experience Center,” and just calls all of them branches, which is what people call them, says Worthington. Here, in brief, are the key points about these transformed branches:

As mentioned, there are no more tellers. Those folks were trained and rechristened as Experience Guides. Their job, first and foremost, is to meet consumers as they come in and show them how to do their banking online, on a mobile phone or using one of the smart ATMs in the branch.

“I think we’ve really missed the mark in banking. Our members and customers don’t see us as somewhere they go for advice. We want to change that.”
— Mina Worthington, Solarity Credit Union

For more complex issues, advice and problem solving, the Experience Guides refer the member to a Financial Guide via a video conference station set up in several partially walled offices along the side of the branch. The Financial Guides are all centrally located in Solarity’s contact center.

Worthington feels strongly a consultative approach is key to the future of community banking.

“I think we’ve really missed the mark in banking. Our members and customers don’t see us as somewhere they go for advice. And so we want to change that.”

Obviously this requires considerable training. Solarity did that with both categories of customer-facing staff. In addition the Experience Guides in the contact center are clustered in “pods” of eight people, each with its own supervisor — really a coach — which helps creates a more consistent experience.

Why Keep Branches at All?

The success Solarity has had in educating its members on how to avoid coming into a branch begs the question of what the future is for branches — or even: Why not shut them versus reconfigure them?

In responding, Worthington makes clear that nothing they’ve done is a cost-saving measure. In fact beyond the renovation cost, they have hired more staff and more expensive staff. The reasons for the investments, she says, have been to improve customer experience and help improve people’s financial lives.

“I don’t think we should assume that banking is an intuitive thing for people, even Gen Z,” Worthington states. “It’s kind of like health care — very private, very personal, and it’s kind of voodoo to people. We have to continue to try to be there for them, and there’s comfort in the physical location.”

So she doesn’t see branches going away. “I see them getting smaller and I see them changing.”

“We discovered that people don’t want necessarily to hand their check to a teller, it’s that they want to engage with our staff. Well, they’re still capable of engaging with our staff in the new branches,” says Worthington, “and even at a deeper and more personal level than when they dealt with them on the teller line.”