Subscribe Now Get The Financial Brand's FREE Email Newsletter
Here’s a unique way to get consumers to open new accounts: savings lotteries -- prize-linked, raffle-style “Save to Win” promotions where people can win cash prizes in exchange for their deposits.

If someone wants to sock some money away for a while, why not do it at a bank or credit union where they have a shot at winning a few thousand extra bucks? It sounds like a fun, innovative way to capture consumers’ attention and encourage positive savings behaviors while generating new account activity for financial institutions.

Sounds great. But there’s just one hitch: it isn’t quite legal everywhere… yet.

For state lawmakers and other policy wogs, such raffle-style savings schemes have fallen into a bit of a gray area. On one hand, they could be construed as a form of low-grade “gambling,” albeit with no real risk to consumers. On the other hand, it could be viewed as a way to harmlessly encourage personal savings through “gamification,” and where’s the harm in that?

In some states, the legal hurdles for savings sweepstakes prizes are eroding. Michigan, Nebraska, Washington and North Carolina have passed legislation that allows them to offer prizes for deposits. Michigan is in its fourth year of program while Nebraska just launched in January 2012. Similar programs are now allowed in Maryland and Georgia as well.

In Michigan, there’s a four-year-old initiative for credit unions called Save to Win, a program subsequently rolled out in Nebraska earlier this year. Credit unions in both states are showing strong results, making particular headway among first-time savers (see the detailed tables with full results here on page 2).

Key Insight: The current rate picture may not be all that pretty, but the lure of prizes — particularly cash — can overpower consumer indifference to savings. You can call it the “lottery effect.”

How “Save to Win” Works

Under the Save to Win raffle program, members who deposit $25 or more into a Save to Win one-year CD are eligible to win an annual grand prize of $100,000, along with some smaller monthly prizes ranging from $125 to $1,000.

With Save to Win, the results so far shows that automatic rollovers are much more common.

“We were among the Michigan pilot group in 2009, and we’ve seen nice growth — up to 2,500 accounts by starting automatic rollovers, something we did on our own,” explained Lauren Vance, VP of strategic development and product delivery at Christian FCU. Prior to the maturity of the initial batch of Save to Win CDs, Christian Financial had been losing 700 accounts; afterward, the trend reversed significantly.

Ad inserts and web promos help build support, but getting staff to buy into the program is the key to making a “Save to Win” promo work. Employees have to be trained to push the savings concept by stressing “cash prizes.” It’s important to get tellers and service reps talking face-to-face with members about savings while hyping “the big prize.”

One fun way to engage staff in a Save to Win promo is to hold an internal branch-to-branch competition.

“We drove the idea of competition between our branches while also helping our members win the big prize,” said Heather Cook, senior MSR at Police FCU in Omaha. Cook and a coworker at another branch became the “Savings Twins,” setting up their own competition. Members cheered the pair on they sparred to see who could bring in the most accounts. All told, Police FCU brought in 348 accounts, a whopping 7% of a 4,600 member base. Not bad. 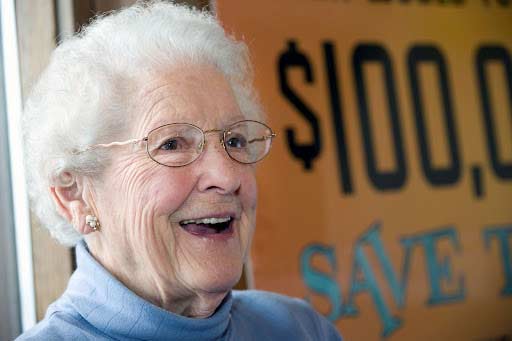 Another similar program, SaveUp, eschews cash for a points-based system. Here’s how it works: A user registers their financial accounts — credit cards, auto loans and bank accounts — then tracks balances as savings are accrued and loans are repaid. Each time a SaveUp user contributes to their savings or retirement account, they accumulate points that can be used to pay down loans or credit card balances.

SaveUp users are issued credits that work like online game tokens. Every $1 that is saved or used to pay down debt earns a credit. Users can earn additional credits by taking financial literacy classes. SaveUp then tests users’ financial acumen, rewarding positive financial decisions with more credits. Ten credits are good for one game. Each user can spend 30 credits per day playing SaveUp’s games — that’s a limit of three plays. Credits can be redeemed for prizes ranging from cash to brand-name products and vacation packages to electronic devices and gift cards.

Of course, the larger appeal of SaveUp is a monthly chance to win a $2 million jackpot. Much like a state lottery, SaveUp players can pick six numbers or opt for a ‘quick-pick.’ No one has one it yet. 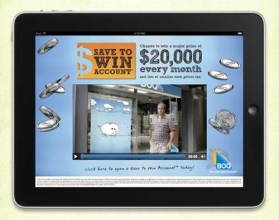 The “Save to Win” concept is nothing new to banks outside North America. Back in early 2011, Bank of Queensland (BOQ) became the first in Australia to offer monthly cash prizes to account holders. The grand prize: $20,000.

Save Up, which is available in all 50 states, dubs itself the first true national rewards program available to U.S. financial institutions.

Another advantage the SaveUp model offers financial marketers: it can be integrated into an existing rewards program or serve as the foundation for an entirely new program.

On Save to Win, credit union think tank Filene worked with the Doorways to Dreams Fund to implement the prize-linked savings idea originally developed by Peter Tufano of the Harvard Business School. The program is based on a centuries old-practice of using lotteries to raise capital for public and private ventures.

SaveUp is almost ready to share results of a six-month pilot with 15-credit unions. Filene Research Institute is performing a study of the model for broader application. The goal: to see if it inspires positive financial behavior, engages members and drives financial results.

A separate study commissioned by Doorway to Dreams found that giving people the chance to win a monthly prize motivated participants to continue regular savings. “This behavior was found across all winners, irrespective of the amount of the winnings,” D2D concluded. 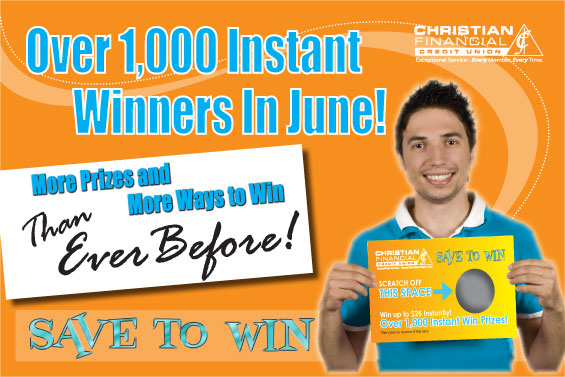 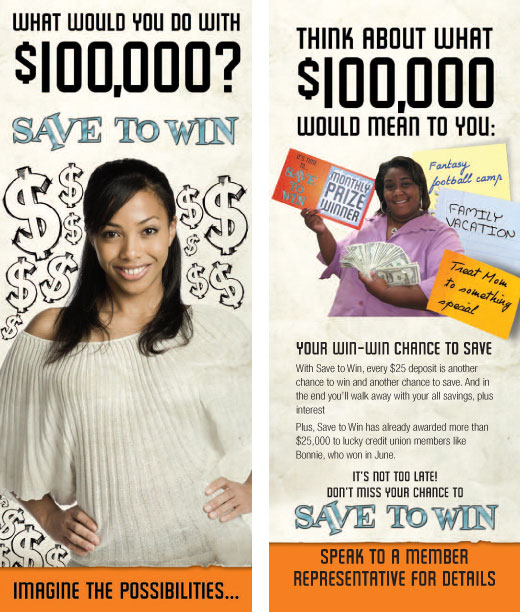 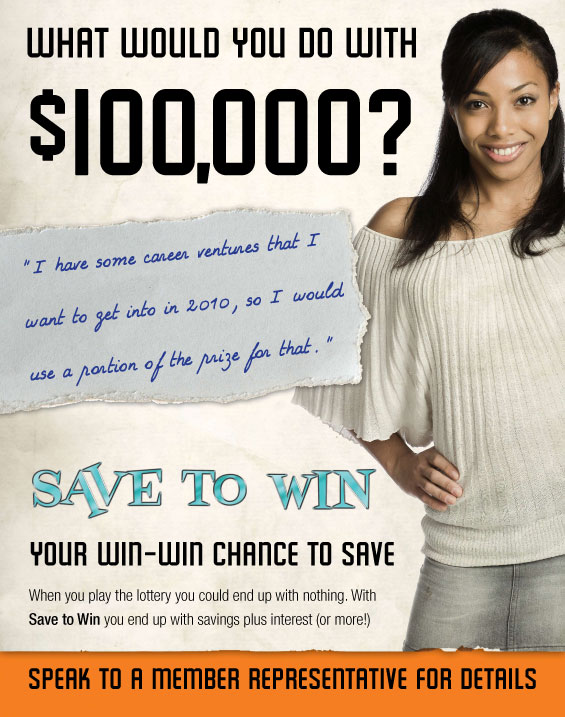 Michigan “Save to Win” Program Results to Date

“Save to Win” Results Per Michigan Credit Union

Nebraska “Save to Win” Program Results to Date

“Save to Win” Results Per Nebraska Credit Union