Banks and credit unions are feeling the sting from Reg E. Overdraft income is down measurably, forcing financial institutions to charge bigger fees to regain ground. But fewer consumers are triggering fewer overdraft fees these days, so the net result is still negative. The downward trend in overdrafts is something financial marketers will need to focus on in coming months.

Around this time a year ago, Moebs had forecast overdraft fees would total $38 billion in 2011, which would have been an all-time high in the financial industry. They had also estimated $35.4 billion for 2010, but the actual number turned out to be $2.1 lower than they anticipated.

In their most recent study, Moebs also analyzed more than 12,000 datapoints surrounding service fee income in the banking industry. They found that banks and credit unions enjoyed an overall rise in revenues in 2011, despite the reversals in overdrafts.

The Moebs study found that the national median price for an overdraft fee increased to $29, up from $27.50 in 2010. Moebs says financial institutions’ price increases on overdrafts are a direct response to costs stemming from a heightened regulatory environment, namely the implementation of the Dodd Frank Act and Regulation E.

The Overdraft Landscape In 2011

The median price has increased by 16% nationally, up $4 in 3 years.

The frequency with which consumers overdrew their checking accounts in 2011 also saw a decline.

The numbers indicate a fall off in volume, a rise in prices, and a loss of revenue, yet Moebs feels the overall market might have bottomed out. Mike Moebs, CEO of Moebs Services, has a rosy outlook.

“Amazingly, given all of the polar forces at play in the overdraft market — volume, price, revenue, a slumping economy, high unemployment, regulator restraint by FDIC, and legislation by Congress — the overdraft market is rising like the mythical phoenix and coming back,” Moebs says optimistically. “It appears that the American consumer is saying they want overdrafts, but they want them as a reasonably priced safety net overdraft, and not an old fashion high penalty-priced overdraft.” 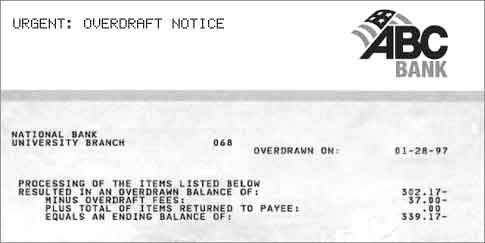 This automated overdraft notice is cold, corporate and impersonal. It doesn’t do anything to help customers feel positive about the overdraft service they signed up for. Customers who get too many of notices like these just might think about shutting their overdraft service off. 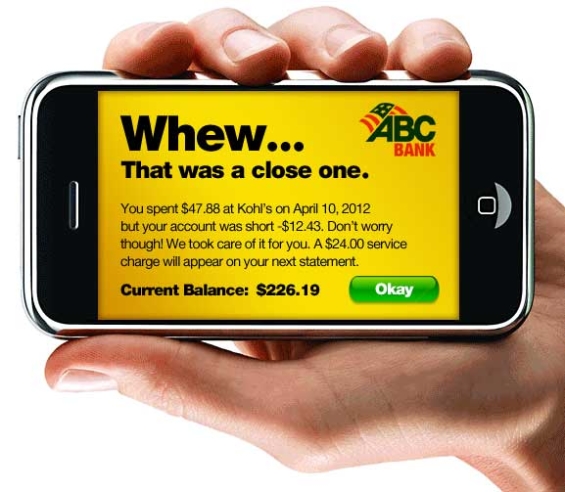 A much friendlier way to alert people about overdrafts. When marketing overdrafts, it’s important to remember you want people to be comfortable every time they incur a fee. Overdraft notices should remind consumers that the (voluntary) fee paid allowed a transaction to go through that would have otherwise been rejected — a huge embarrassment and inconvenience.

According to an earlier study by Moebs, 44.3% of banks and credit unions made some type of change to their overdraft program in response to opt-in requirements vs. 55.7% who did nothing. One in five increased prices to offset revenues lost from those opting out. 6.5% actually decreased prices for overdraft protection.

Almost one third, or 29.3% of all financial institutions, changed the amount they charge customers who overdraw their accounts. Of those who changed, 14.6% lowered their price, by an average $4 to $25. Main Street banks and credit unions with assets less than $100 Million, charge customers an average price of $25 per overdraft.

Mega banks, with assets greater than $50 Billion, charged customers a median price of $33.50 per overdraft. As a whole, all banks were at $30, and all credit unions were at $25.

“More and more banks and credit unions are lowering the price of overdrafts,” points out Moebs. “This decision bodes well for these institutions as they try to reclaim lost market share to payday lenders, who only charge consumers a median price of $17.50.”

Key Question: How many financial institutions have aggressively marketed overdraft opt-ins since their one big push in the wake of Reg E? How many banks and credit unions continue to actively promote adoption of this service on a regular, on-going basis?

Just be careful. Consumers are prickly about bank fees these days, so financial marketers trying to boost overdraft income will be walking a fine line. Indeed Jim Sloan, a financial columnist, has wondered why there hasn’t been a consumer revolt against overdraft fees. “With so many consumers in a hyper-vigilant state over some checking account fees,” he writes, “why are consumers still willfully paying billions in overdraft charges every year?”

Who should you target? Heavy users. Moebs found that almost all of those consumers who averaged ten or more overdrafts in a year elected to opt in. JP Morgan Chase said that of those who frequently overdraw their accounts 53% signed up for overdraft coverage. Smart financial marketers will identify who these people are through data and demographic profiling.

Key Takeaways: Keep marketing overdraft protection. Consumers need to feel like it is a value-added convenience — a service most people use and appreciate — and not another smarmy way financial institutions gouge common folks.