Subscribe Now Get The Financial Brand's FREE Email Newsletter
With fintechs, big banks and regulators putting heavy downward pressure on overdraft and NSF fees, the standard model of charging $35 per overdraft is headed to the chopping block. For many community banks that's a serious blow to revenue. To remain competitive (and profitable), smaller institutions must redesign overdraft policies.

Overdraft fees have been a big sore spot between consumers, banks and regulators for some time. But what had been a largely academic debate changed when numerous big banks eliminated overdraft and/or NSF fees in 2021-22 in response to governmental pressure and the competitive impact of neobanks.

Those changes created a wave of momentum now sweeping downstream, forcing community banks and credit unions to reconsider their own policies.

It’s not a simple decision. While overdraft and NSF fee income is significant for the big banks, it is even more so for smaller institutions. These fees represent a large percentage of many small banks’ noninterest income.

Despite the challenge of this overdraft fee rollback, community banks and credit unions can still find an opportunity to build relationships and recapture profits. New options, such as moving to end-of-day balance, raising overdraft limits, and offering short-term lending solutions, can enable these institutions to become more competitive while minimizing or offsetting the loss of overdraft fees.

Not a Good Option:

Aside from causing a big hit to a bank's revenue, nixing overdrafts altogether will drive some consumers to high-cost lenders.

A significant consideration is that a majority of consumers don’t want to lose all access to overdraft service, even though it’s expensive. In fact, more than 60% of overdrafts were intentional, according to research by Curinos.

“Regulators do not want consumers leaving the regulated banking system to meet short-term liquidity needs, as they routinely do now by going to payday lenders, pawnshops and online alternative lenders,” says Christopher Leonard, CEO of Velocity Solutions, a provider of algorithm-based liquidity solutions.

Most banks and credit unions still charge overdraft fees, but the status quo may not be viable for long. as big players move to sharply reduce or eliminate the fees. Ally, Capital One and Citibank have all eliminated overdraft and NSF fees in the past year. Bank of America, Wells Fargo and Chase have also reduced fees and implemented grace fees or other options.

Sooner or later customers of smaller institutions are going to notice the disparity and want to know why their bank is still dinging them so much for an overdraft. Or simply get mad and leave.

“This all goes straight to the heart of community banks and credit unions,” Mike Moebs, Economist and CEO of Moebs Services, told >strong>The Financial Brand.

As noted earlier, many smaller banks rely on fees for a larger portion of their revenues than big banks. According to data from Moebs Services, 3.6% of banks (primarily community banks) and 43% of credit unions would have no bottom line income if overdraft income were eliminated.

“For community institutions whose service charge income exceeds their net income, if they didn’t have this service charge, they would be out of business. That ultimately is the problem,” says Moebs.

Seeing the writing on the wall and taking a cue from large institutions, many community banks and credit unions are re-evaluating their overdraft fees and policies. Here are a few specific examples:

Atlanta-based Ameris Bank announced in March 2022 the elimination of NSF and overdraft fees in most cases. The southeastern regional bank with $24 billion in assets is able to weather the fee reduction.

Jovia Financial Credit Union is much smaller, at $4 billion in assets, and yet it also did away with traditional overdraft and NSF fees. The New York-based credit union replaced overdrafts with a new account, CareFree Checking, that also has no monthly maintenance fee or minimum balance requirement. 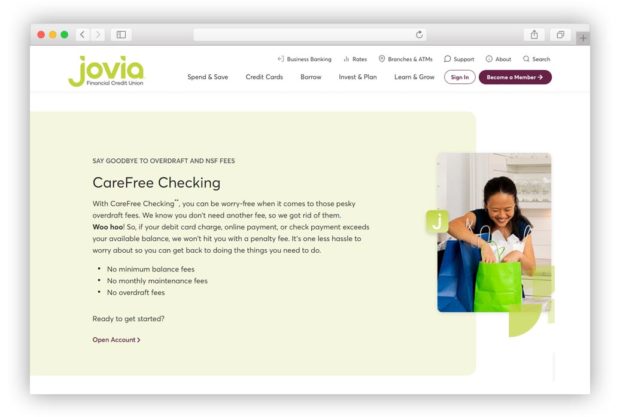 In April 2022, Iowa’s MidWestOne Bank announced Overdraft Flex, a new policy that enables customers to avoid a fee when the overdraft is $50 or less. In addition, they will incur no charge for an overdraft of $5 or less, and the maximum number of daily overdraft fees has been reduced from five to four. MidwestOne Bank has assets of about $6 billion. 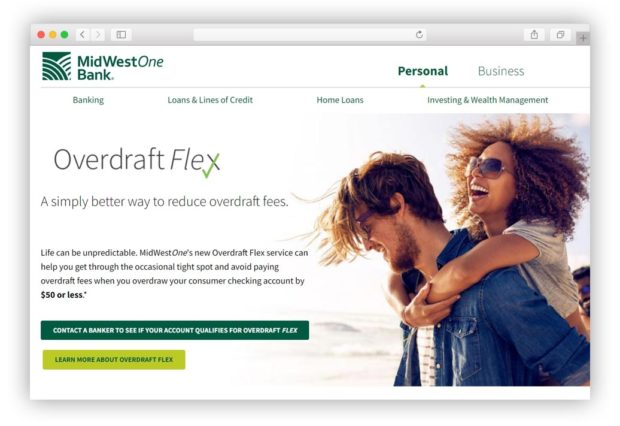 There are several other options community banks and credit unions can consider to remain competitive and retain revenues in the face of declining overdraft fees.

One of the easiest things is to move overdraft fees to interchange fees by developing an “overdraft credit” to offset the loss or even act as a credit to reduce overdraft charges, says Moebs. Community banks should also focus on their strength with local relationships, Moebs points out. While many small banks may not remain viable by simply matching Bank of America’s $10 overdraft fee, they can drop fees to $19.99, extend grace periods and offer fee refunds based on the customer.

Community banks can't afford to simply slash overdraft fees across the board. A more segmented approach, aided by technology, would be better.

Justin Hayden, managing principal at consulting firm Capco, told S&P Global Intelligence that because community banks are not under a microscope like large banks, they can take more nuanced approaches. For example, some offer one account with zero overdraft fees as an option rather than targeting all accounts.

Others may also lower their overdraft fee amount while increasing fees in other areas to replace income or give consumers more time to address the charge. Whichever route they choose, smaller banks need to act now to start exploring the options that work best for them.

“A lot of these community banks won’t survive if they turn around and cut it off one day without having any planning in place to offset the revenue,” said Hayden, referring to overdraft fee income.

Small-Dollar Loans Can Be Profitable

Another option is to take the path of some bigger banks and move to more short-term lending options. Velocity Solutions’ Leonard notes several keys to attaining profitability on these loans, including pricing, underwriting and efficiency. For pricing, he points to guidance by Pew Charitable Trusts, which advocates an 18% interest rate plus a monthly fee of 3% of the borrowed amount.

That means a consumer who overdrafts and triggers a $400 three-month loan would pay interest and fees of $60. “Pew’s point is that banks should be encouraged to make these loans because they are so much less expensive to consumers than payday loans,” Leonard states. “Banks can profitably issue a $400, three-month loan for about $60, or six times less than the $360 average charged by payday lenders,” he points out.

The key to making such loans work, will be technology to automate the underwriting and processing — low cost is critical. Technology will enable many other new overdraft options as well. For example, it can automate fee rebates given to customers once they bring their accounts back into balance.