“Some parents will talk to their sons and daughters about the birds and the bees…but not the bills.”
— GTE FCU’s U22 Account

GTE Federal Credit Union’s U22 account, designed specifically for ages 12 to 22, includes parents as a segment of the target audience. The core features of the account include: 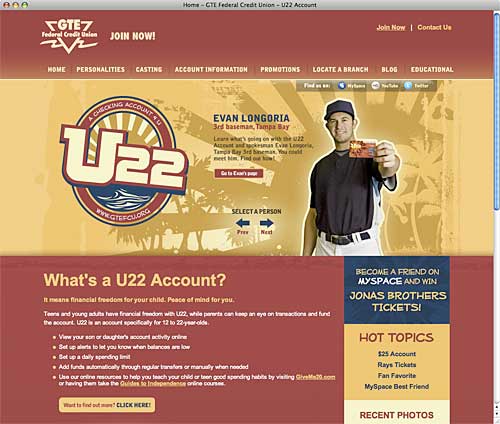 The U22 microsite has two tools that will contribute greatly to GTE’s results: one is a instant online chat, and the other is a link to an online account-opening site.
U22 features specifically for parents include:

Tampa Bay Rays’ third baseman Evan Longoria is the official spokesman for the Florida credit union’s U22 initiative. Those who open a U22 account by September 5, 2009, will receive two Rays tickets and a chance to meet Longoria before the game.

GTE FCU added two other faces to its spokesteam as U22: Caroline Kudelko, a 12-year-old local musician, and Alex Perez, college student and aspiring actor.

Perez was chosen from 125 youths who auditioned to represent U22 at a casting call coordinated by the credit union and partner agency CEA Marketing in June. GTE also accepted video auditions on YouTube.

Entrants were supplied a script for the auditions, which constrained their creativity and self-expression. This method of screening placed a premium on the entrant’s acting abilities, so it’s no surprise that an aspiring actor won the job.

Caroline and Alex will be keeping U22 account holders and the public updated on their activities and pursuit of their financial goals via blogs, videos and website updates at www.u224u.com.

A fictional mom named Kathy rounds out the cast of characters. Kathy shares smart money-management tips for parents and kids at a blog embedded in the U22 microsite.

GTE SPOKESTEAM
Four different spokespeople, including a celebrity, child prodigy, college actor and fictional mom. It’s an unusual strategy because usually a spokesperson — especially a paid celebrity like Longoria — is chosen to be the solitary face of representing a company or campaign.

The U22 initiative includes a presence on MySpace, Flickr and Twitter. The credit union currently has a refer-a-friend promotion for its MySpace page. A drawing will be held for a number of prizes, including two tickets to see the band Blink 182. The credit union also has a corporate fan page on Facebook. 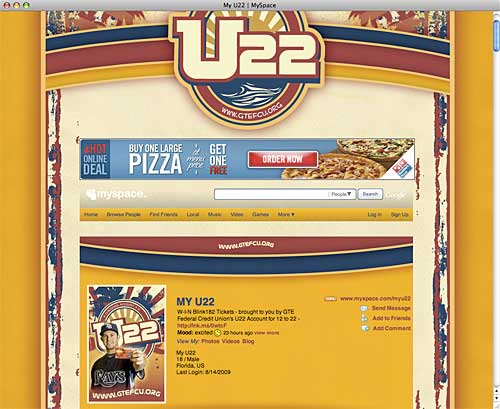 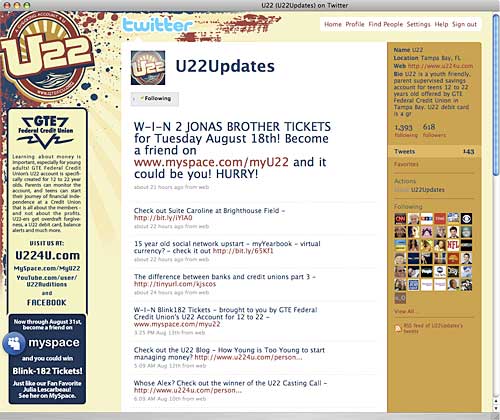