Subscribe Now Get The Financial Brand's FREE Email Newsletter
The deposit rate war is on. There will be those who excel at deepening customer relationships, and there will be those who suffer deposit runoff and precipitous increases in funding costs. Here's how banks and credit unions need to position themselves to thrive at a time when moving money to a competitor with higher rates is so enticing and far less of a hassle than in years past.

For executives in the banking industry, “rates-up” environments are more of a blessing than a curse. In fact, they’ve wanted an upward movement in rates for a long time – about 15 years. It’s easier for banks and credit unions to make money when rates are at historical averages, rather than at historic lows. In a business where profit depends on the margin between the yield on earning assets and the cost of funds, there are more opportunities when you can work on both ends of that margin.

The grave risk facing banking institutions is that their deposit-competition skills have atrophied. That 15 years of no major funding pressure means there is a new generation of marketers with no experience tackling the deposit-gathering challenge, as several credit union executives pointed out during a roundtable at The Financial Brand Forum in November.

There isn’t a deposit Armageddon caused by external factors, though pressure is certainly mounting. Rather, there’s an internal crisis brought on by years in an artificial reality of funding security. Institutions have had more deposits than they’ve known what to do with.

“Relationship” must mean something much more than window-dressing; it must mean solving the problems most in customers’ or members’ minds if it is to stave off price-driven attrition.

Seeking Safe Returns for Their Savings

Deposit attrition is not a top concern for many banking institutions right now. When they look at their cost of funds in 2022, they don’t see huge increases or exploding deposit runoff — yet anyway.

What should keep leaders up at night, though, is the increasingly plentiful options for safety and higher yield available to consumers with each passing month. For 15 years, the S&P 500 and alternative investments like cryptocurrencies have been the only options for returns above 1%. There’s an obvious pain point with those options: return on investment for consumers has meant risk, and a lot of it. There has been no safe, government-guaranteed means of investment that offers an attractive rate of return.

Safe options for high yield are plentiful for the first time in 15 years, and bankers should be worried about this competitive threat.

Now, though, the Federal funds rate has climbed above 4%, the highest level since the Great Recession of 2008. Banking institutions are competing with the U.S. Treasury, which offers bonds near 5% at this writing. Private firms, too, are stepping in. Synchrony is promoting 3% on savings accounts, and one-year certificates of deposit are paying more than 4% at many places, with Edward Jones as high as 4.70%, American Express at 4.25% and Capital One at 4.1%.

For investors in equities or cryptocurrencies, the new rate environment is manna from heaven. With recent terrifying news in cryptocurrency, and the bears wreaking havoc in the stock market, near 5% on an FDIC-insured CD sounds very appealing. Many will seek a safe harbor for their money, and competitors are already dangling offers to attract those moving to safety.

Looking for a Financial Home

Competitors’ aggressive pricing is one good reason for worrying about deposit attrition. But there’s a deeper, emotional movement happening that presents both risk and significant opportunity for banks and credit unions. Consumers, especially savers, many of whom have parked cash at their institutions for years, are looking for a financial home.

Low rates on loans have supported borrowers’ financial dreams well. Savers – such as first-time homebuyers and retirees – have struggled significantly.

For example, among consumer cohorts now in their 20s and 30s, saving to purchase a home is a priority for less than 20%. Yet that same cohort says buying a home is a top priority, according to data gathered by Plinqit, a technology platform that focuses on helping people save. Why the disparity between their aspirations and their behavior? First-time homebuyers need enough for a 3% down payment and they just don’t think that’s attainable, Plinqit executives said in a webinar published by BankBeat.

At the opposite end of the age spectrum, those in retirement or preparing for it are facing a critical challenge. According to a McKinsey & Co. survey of 9,000 U.S. households, as many as 80% of baby boomers may be unprepared for retirement, and they must overcome “decumulation,” or the process of converting savings for retirement into a consistent and sufficient stream of income that lasts for the rest of their lives. “Many prospective retirees feel that they lack assets and the financial know-how they need for a confident retirement,” said a McKinsey report about the survey.

Four out of five baby boomers may not be ready for retirement, according to McKinsey & Co.

Consumers of all ages will seek higher and safer returns because having a home, a rainy-day fund, or a well-funded retirement — their financial needs and dreams — will depend on it.

Providing education, guidance and options is at the heart of the relationship banking that people need today. The institutions that help people address their financial needs and make their dreams a reality have the best chance of remaining, or becoming, depositors’ financial home.

Consumers “will put their money to work somewhere,” says Neil Stanley, founder and chief executive of The CorePoint, a consulting firm in Omaha, Neb., that focuses on deposit-gathering strategies. “Banking organizations will see deposit balances decay, and either will have to pay to keep those deposits or understand how to tailor their products in valuable ways.”

Banking publications have covered technology’s effect on deposit movements often. It’s generally understood that money can be moved more easily today than ever before. But is technology the only grease in those gears? Not even close.

The Federal Reserve Board removed certain restrictions on deposit accounts that seemed insignificant during a time when institutions were cash flush but are more consequential in the current competitive environment. For example, the Fed lifted the prohibition on paying interest on commercial accounts and the limit on the number of transactions from a savings account.

“No bank will rush to pay interest on commercial accounts,” Stanley says, “and transactions on savings accounts aren’t onerous in themselves, but they create even less regulatory friction than before for rate competition and depositor movement.”

Then there’s the composition of core deposits at banking organizations. 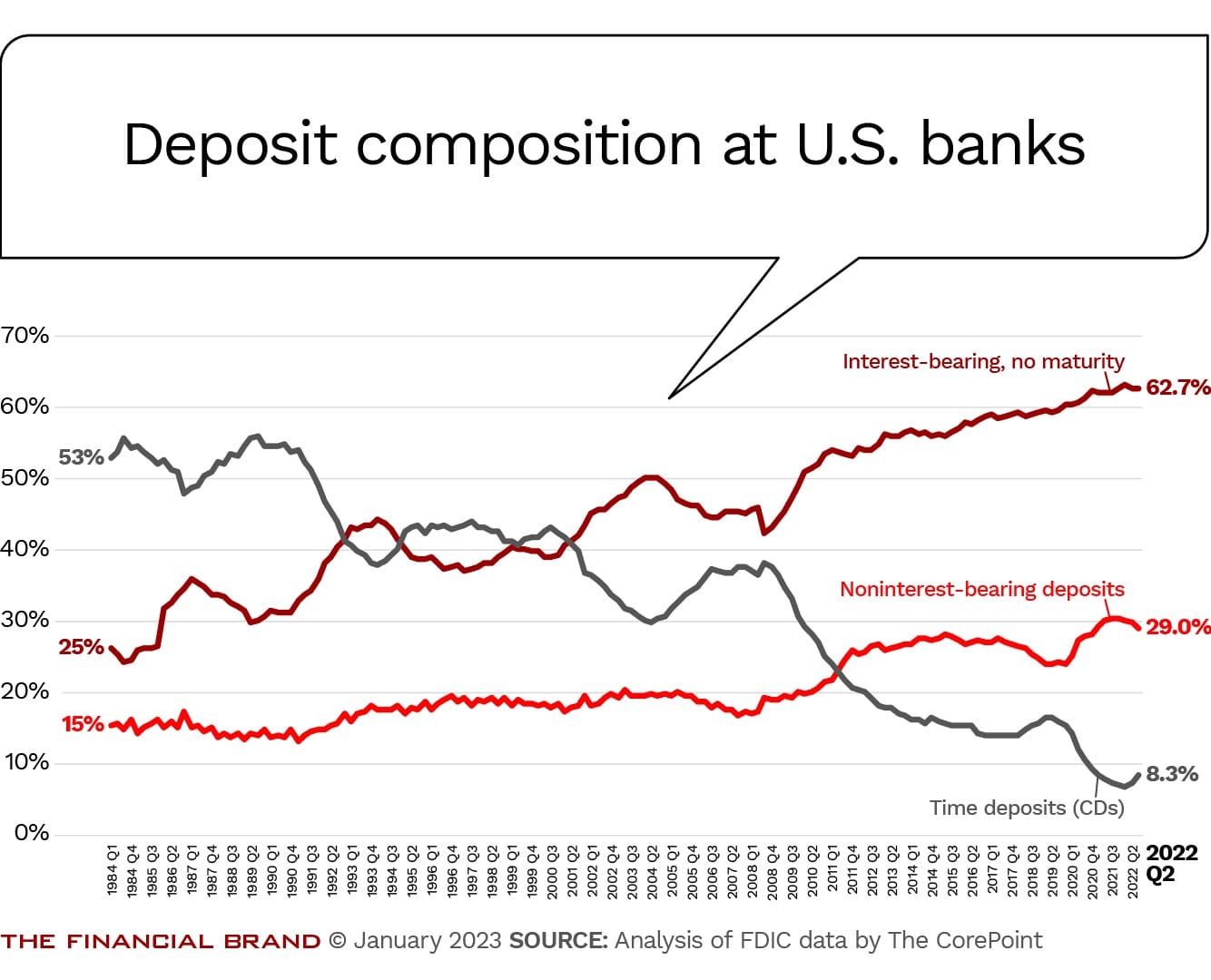 Since the first quarter of 2021, the share of core deposits that had maturities — meaning time deposits as a percentage of total domestic deposits — has hovered between 7% and 9%, the lowest level of tied-down deposits in more than 35 years.

And the noninterest-bearing accounts that banking leaders love — the ones that a competitor could pay interest on — have no commitment whatsoever from the depositor to stay with the same bank or credit union.

Consumers are going to act in their own best interest and the availability of higher rates is a major incentive for them to take a look at other financial providers. They’ll seek out those who help them change what has been a dire landscape for savers into a clear road for achieving their desired financial outcomes. Banking executives must choose: Let chance decide which depositors stay or go, or use engagement and education to show them that you are their financial home.

About the authors:
James White has 25 years of experience helping financial institutions grow market share, and Matthew Doffing has covered the banking and mortgage industries for nearly 12 years. Total Expert is a customer engagement platform.