What is a bank doing at a major gambling event?

Trying to raise deposits from professional gamblers and supporting those players at the tournament who already bank with it.

Yes, you read that right. Historically banking and gambling have not been two words typically used in the same sentence, but Las Vegas-based Lexicon Bank has unusual roots.

Many members of its founding group of investors and board of directors are poker enthusiasts or involved in the gambling industry. Chairman Russell Rosenblum, an attorney and entrepreneur, has played serious professional-level poker as a hobby for years. (“A profitable hobby,” he notes.) He and other bank officials know the business and players.

Lexicon, which opened its doors in 2019, signed up to sponsor the 2021 World Series of Poker in order to publicize its Professional Poker Banking program. Indeed, one of the requirements to participate in the program is that a player must have competed in at least one World Series. The event, run by Caesars Entertainment, spans nearly two months. Approximately 7,000 gamblers take part in it in some way.

“Professional poker players are a business, just like any other,” insists Rosenblum. They also have special banking needs, one of which is simply being allowed to maintain their accounts. Rosenblum explains that it isn’t unusual for players to start accounts only to have financial institution compliance departments insist that the relationships be terminated because of the unusual traffic they often exhibit.

Rosenblum says that for larger institutions flush with deposits, banking professional poker players isn’t worth the headaches and special handling.

“But for us,” says Rosenblum, “a $2 million deposit is meaningful.”

Before he became part of a banking startup, Rosenblum explains, he thought regulators simply didn’t want banks opening accounts for professional gamblers. “Now that I’m in the business,” he says, “I’ve learned that that’s generally not the case. It’s about knowing your customer and knowing the poker players.”

Rosenblum explains that when the bank was in formation this unusual niche was seen as a way to build deposits.

While currently many institutions have a surplus of deposits, Lexicon keeps at it because it believes taking care of the professional players will bring in large deposit relationships that will be sticky ones, not money ready to move at the drop of a basis point.

In mid-2020 Daniel Negreanu, then a six-time World Series of Poker winner, moved the account he keeps his winnings in to Lexicon. The occasion of the transfer was his being kicked out of his previous institution. His move to Lexicon was so notable in poker circles that the bank put out a news release.

Rosenblum says what happened to Negreanu is pretty common. He says professional players’ needs are not well understood by institutions with little knowledge of the literal ups and downs of this business. Someone who does well in a tournament may bring a large amount of money into their account, and losers see their balances fall, sometimes by significant amounts. This volatility often catches the eye of compliance staff monitoring activity and the most straightforward thing to do, often, is to simply tell the player to move elsewhere.

Even up front, opening working accounts for a professional gambling career can be tricky, according to Rosenblum: “Getting to know a poker player is harder than getting to know a retail business.”

Rosenblum says the program has customers in the double digits at present and hopes are to build that up in the wake of the World Series sponsorship. Originally the bank was to sponsor the 2020 event, but the pandemic cut off that opportunity. 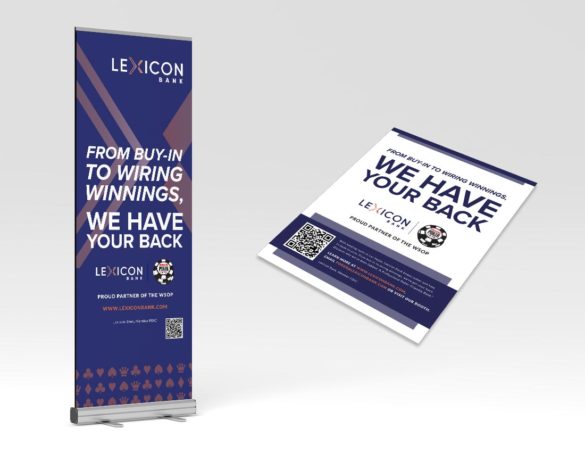 One misconception is that professional players will be making large cash deposits and withdrawals — a trigger under federal anti-money-laundering compliance rules. Rosenblum explains that tournaments like the World Series generally don’t accept cash from players to buy into games and at the conclusion of events don’t pay off with winners with cash.

Professional players generally have to send their money ahead of themselves in order to play in tournaments. It’s a business involving many money wires, moving funds from the bank to the sponsoring casinos and vice-versa. Wire details and requirements often vary from one casino to another and the bank’s program offers a concierge to help arrange all necessary funds transfers. Screw-ups and account closures can endanger entries into tournaments.

Up front, Lexicon vets potential poker account holders both personally and technically. Rosenblum or bankers may meet with a prospective accountholder to see if they are truly professional players and to pointedly ask if they are willing to abide by bank policies. Applicants are also formally checked out within the poker industry. Rosenblum explains that tournament standings are public. With the permission of applicants further details of playing history can be obtained from casinos, including how much the applicant has won and lost.

“You can know what they’ve been doing if you are willing to work a little bit. Now we know more about most poker players we bank than we do about most of our restaurant owners.”

Rosenblum says the bank typically also asks to see the players’ casino rewards card from the Rio, the venue for the World Series. Not being able to produce one is an instant giveaway that the person isn’t a professional player, he explains.

The detail of putting two and two together to be sure they add up is time consuming, but then Lexicon is dealing in potentially large deposit accounts.

Ongoing monitoring can also be different from that applied to many other customers. Among other measures, the bank monitors players social media accounts.

“If you tell us you are going to a tournament in London, and then we see a tweet that shows you’re sitting in Iowa, we’re going to have a problem.”

The chief interest in these accounts is raising deposits, not fee income, and Rosenblum says that the bank has been careful with account-related charges. Poker players tend to be open handed with money, “but one thing about poker players is that they hate being nickeled and dimed to death,” says Rosenblum.

He shares an anecdote to understand the culture. When they are in casino poker rooms, while they are playing they can get free bottled water. The moment they stand up, exit the room and go to a nearby casino bar, that bottle of water will cost them a couple of bucks.

“There isn’t a poker player I know who won’t walk back into the poker room and ask for a free bottle of water,” Rosenblum says. “They’ll potentially tip 40% or 50% at dinner, though, so it’s not the money. For them it’s a principle thing.”