Subscribe Now Get The Financial Brand's FREE Email Newsletter
'Checking' is becoming an anachronism, but no matter. Consumers, including Gen Z and Millennials, still flock to these accounts. But they've changed how they use them and how they open them. Financial marketers that understand this shift can successfully defend against the appeal of Chime and other neobanks.

With use of transaction options like Zelle, PayPal and Chime soaring, will the checking account continue to be relevant, or become a banking relic?

The answer depends on how these core banking accounts are positioned and marketed. Right now, they remain a cornerstone account, but their role is changing.

Before you go too far down the renaming road, consider that the term ‘checking’ is not a big deal to many consumers.

Phoenix Synergistics asked a group of 2,000 consumers age 18 and older to suggest a better name for checking accounts. It found that 44% felt “checking account” was just fine. The next-highest choice was “transaction and payments account” at just 12%, with “digital bank account” chosen by only 7%. Nearly a third (31%) of Gen Z respondents, on the other hand, liked “digital bank account,” so that’s something to think about down the road.

Far more important is a shift from viewing new checking accounts mainly as the means to generate deposits and fee income (still important, but in decline) to positioning checking as part of a broader effort to help consumers manage their financial lives, according to Bill McCracken, President of Phoenix Synergistics, a unit of Phoenix Marketing International. He believes most financial institutions fall short in making that adjustment. The solution, however, is not that difficult, he maintains.

The venerable checking account is unquestionably being squeezed by several factors. Prior to the arrival of the pandemic, debit card interchange and NSF/overdraft revenues were generating $165 per checking account for the typical bank or credit union, according to Raddon. Reduced consumer spending as a result of the pandemic’s economic impact has negatively impacted both of those revenue streams, the research firm states. So did overdraft waivers.

With a new administration, and new leadership at the Consumer Financial Protection Bureau, overdraft revenues will come under increasing scrutiny.

Overall, the use of checking accounts as a parking place for funds has been diminishing for some time, says McCracken. Of four descriptions of primary checking accounts that consumer respondents were presented with in the Phoenix Synergistics checking research, the biggest response, at 62%, was for “An important tool for paying bills and making purchases.”

In addition, 11%, described their primary checking account as “The foundation or core from which I build my financial portfolio.” McCracken points out that 18% of Gen Z respondents used that description. Taken together, these responses — “an important tool” and “a core for building” — reinforce that checking accounts, properly positioned, remain crucial products for banks and credit unions.

Nine in ten consumers report their household has a checking account, including two-thirds of Gen Z respondents. Those are powerful numbers. However, the Phoenix Synergistics research also found that nearly two-thirds (64%) of all consumers agree with this statement: “Being able to use my mobile phone to manage my checking account is essential to me.”

Further, almost one fifth of consumers already have a checking account with a mobile-first bank, making purchases primarily with a debit card linked to their account. 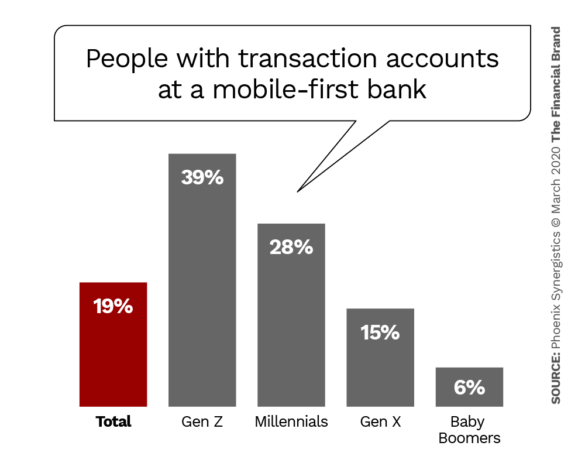 McCracken says the number one reason consumers overall gave for having a mobile checking account was, “A mobile-first bank fits my lifestyle.” The number two reason, he says, was that mobile bank interest rates are higher. The veteran bank researcher believes the first reason is more significant as there will always be someone who will pay a half or full percentage point higher to attract deposit accounts.

“There’s nothing inherent in a neobank that suggests they’re the only ones that can develop a great mobile experience.”
— William McCracken, Phoenix Synergistics

Despite this, banks and credit unions don’t need to fear the Chimes of the world, in McCracken’s view. They have the means in hand — or available — to counter the mobile experience challenge.

“The top banks can easily replicate the fintechs’ mobile experience and some already have,” McCracken told The Financial Brand. “Bank of America’s mobile interface is the equal of any mobile bank out there,” he declares. “Can other banks match that experience? I think they can.” To a great degree regional and community banks can partner with vendors or fintechs to acquire the needed mobile user experience, the executive believes.

“There’s nothing inherent in a neobank that suggests they’re the only ones that can develop a great mobile experience,” McCracken maintains. “It’s just that in general they’ve been a lot more attuned to what consumers want and moved very quickly to meet that.”

If banks and credit unions commit to achieving a better digital experience, they have a fundamental advantage over fintechs that, if used, would ensure that checking accounts remain the crucial product that they have long been. But for different reasons.

In his interview with The Financial Brand, McCracken used the analogy of convenience stores that sell gas to illustrate the evolving role of checking.

66% of consumers agree: ‘I consider the financial institution where I have my main checking account to be my financial partner for life.’

The biggest-selling product by volume for these stores is the gas that they pump. But their most profitable product by far, says McCracken, is the food, beer and other things they sell in the store.

It’s a perfect analogy for financial institutions, he explains, because they still need to sell “gas” — meaning checking accounts — because that’s what brings the traffic. “You have to get them inside your ‘store’ so you can say, ‘Let me show you what else we have’,” McCracken maintains. So checking is still a cornerstone, but in a different way. It’s no longer a place where funds are just going to sit. Instead it drives future sales as part of a customer’s lifetime journey.

However, data from the Phoenix Synergistics’ research indicates incumbent financial institutions are missing this shift in emphasis.

The chart below shows that less than half the time is a consumer sold something in addition to a checking account. In McCracken’s analogy, it’s the equivalent of pumping the gas and then letting the customer drive away. There’s not much future there, he warns. 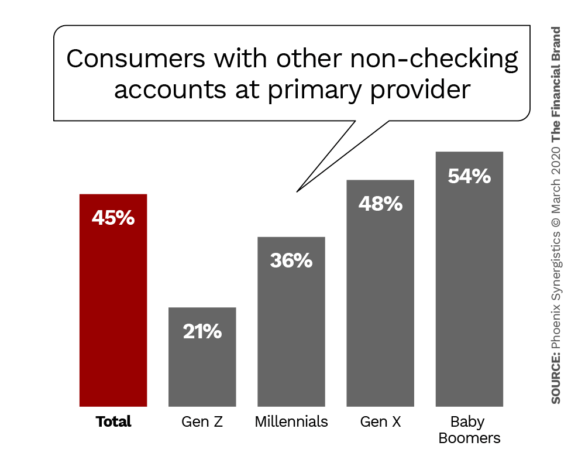 “If a financial institution continues to think it’s doing a good job by simply opening more checking accounts, they will quickly lose out to the neobanks,” McCracken predicts. The latter, with their combination of better mobile interface and higher interest and/or lower cost will win that fight.

The research uncovered another untapped opportunity. 80% of consumers say they prefer to use a single financial institution for most of their financial needs. Yet, as shown in the chart below, nearly two in five consumer households have more than one checking account, and of that group, slightly more than half say they have at least one of the additional accounts at another institution. 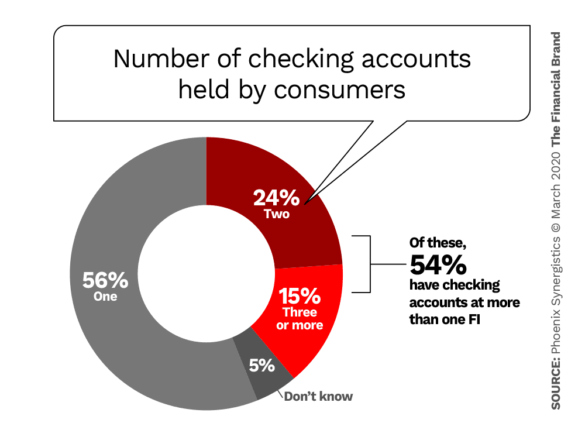 McCracken’s conclusion is that the primary checking provider did not make it worth the customer’s while to keep their second account with them.

Too often, he says, everything is treated separately. For example, the purchase of a large CD doesn’t impact loan rates or the cost of a second checking account, etc.

A key difference between a successful retail financial institution and all the others is this simple concept: “The more assets you bring us, the better we will treat you.”

“The reason Chime does well is because not many banks and credit unions have the mentality — nor the type of training — to say, ‘We are a one-stop shop and we can stand beside you on your financial journey and provide for all your needs’.”

McCracken concedes that the rapid shift of many banking interactions from branch to digital has impacted many institutions’ ability to cross-sell effectively, much less enabling the holistic approach described above.

Prior to the pandemic, the most successful cross-selling occurred face to face, says McCracken. But even looking at the last five years, more people opened checking accounts online than in-person. 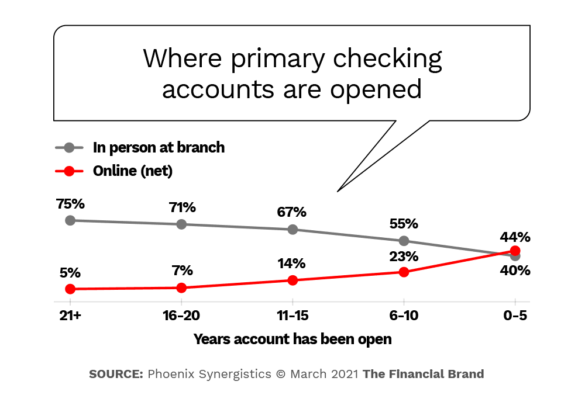 There are many challenges, to be sure, but McCracken believes that any financial marketer that can package and position an institution’s checking account as part of an overall experience — one part of a range of products a consumer is will need to manage their financial life — shouldn’t have to worry about neobanks.