In 2014, the US banking industry will spend roughly $2 billion on advertising, marketing and promotions to appeal to the 11 million plus households that will establish new primary banking relationships during the year. Feature preferences that make banking more convenient and accessible will continue to gain more traction in 2014. 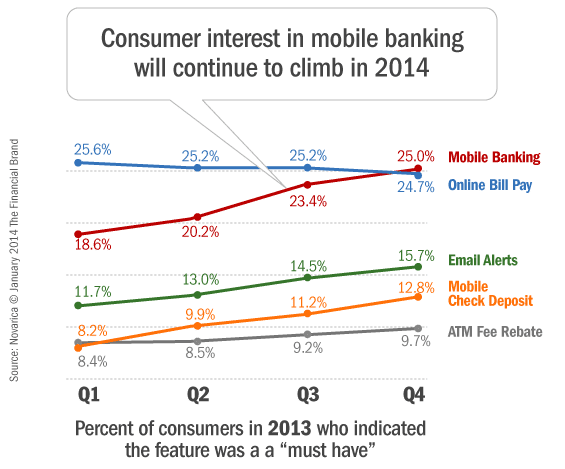 Email alerts will gain more interest. This is a sleeper feature that many marketers consider an afterthought. But with more and more consumers using smartphones, email alerts have the immediacy of text messages. We saw demand for email alerts grow by 34% during 2013.

But interest in online billpay will continue to decline. In Q4 2011, a peak of 37% of shoppers said they must have online billpay. Two years later, less than 25% of shoppers are demanding online billpay. We see two causes for this decline: Many consumers consider online billpay as “table stakes” and therefore don’t feel it’s necessary to specifically demand the feature; many billers have been aggressively marketing their automated payment services.