Subscribe Now Get The Financial Brand's FREE Email Newsletter
The number of consumers taking advantage of checking account promotions has more than doubled in one year. Why? To meet growth goals, many institutions have been using cash incentives to pry customers away from competitors.
Subscribe Now!

Back in the day when people made regular trips to their bank branches, they would switch banks when they moved away to a new town. That’s still the case for 15% to 20% of people actively shopping for checking accounts, but digital services like mobile deposit capture and access to surcharge-free ATMs makes it much easier for people to remain with their current institution, regardless of where they live. As more consumers have adopted using digital services, fewer prospects are naturally available to acquire. The result: More institutions are relying on large promotions to persuade people to switch.

In the third quarter of 2014, one quarter of consumers on FindABetterBank who picked a new checking account did so because of an ad or promotion. A year ago, only 10% chose an account because of an incentive. Reported banking behavior and feature interests indicate that younger consumers are the most likely beneficiaries of these offers.

There is great geographical variance among those taking advantage of promotional offers. For example, 39% of San Francisco shoppers cited an ad or promotion compared to only 15% of Cincinnati shoppers. 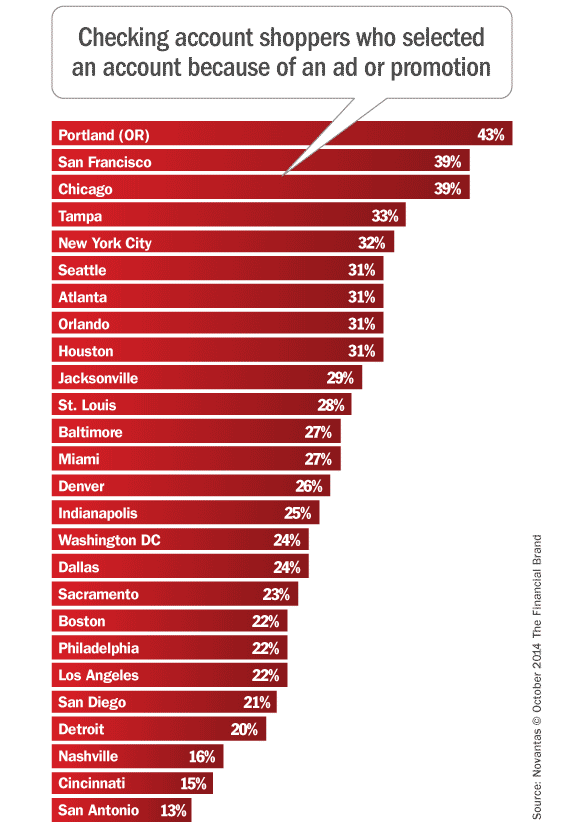