Subscribe Now Get The Financial Brand's FREE Email Newsletter
With disruption modest and industry market share steady, it's easy for traditional banks and credit unions to conclude that it's better to ride the wave of prosperity than proactively change business models and strategies. But doing so may result in waiting to digitally transform until it's too late to catch up.

The banking industry is in the midst of a period of continued prosperity that began shortly after the 2008 financial crisis. According to Boston Consulting Group estimates, global banking revenues will climb to an estimated $5.4 trillion by 2022 – 75% higher than their level in 2011. While the growth has been stronger in some regions and businesses than others, most organizations are experiencing good times.

And, while returns on equity still are below pre-crisis levels, profitability continues to increase, with the near-term prospects remaining positive. Finally, despite increased competition from new banking entrants, fintech firms and even tech companies, market shares for most financial institutions have remained surprisingly constant. Trust in traditional banks and credit unions is strong, with imminent disruption being less than many industry watchers predicted. 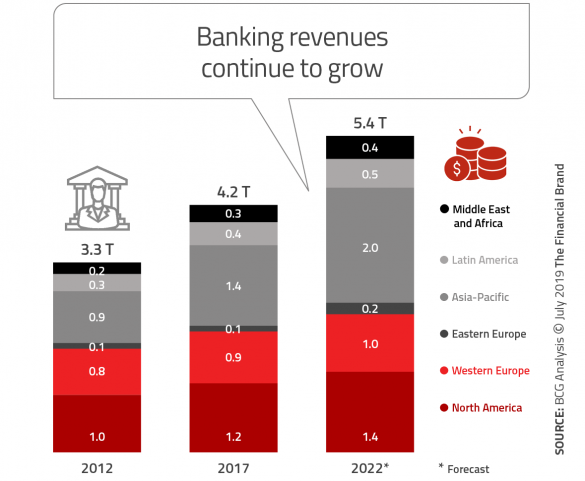 So, why should banks and credit unions mess with success? Why should the leaders of financial institutions change the underlying foundation of what has worked well in the past to take risks that will most likely involve significant financial investment in technology, a change in organizational structure, and a disruption of current jobs and roles that could potentially even include the elimination of their own job?

Jeff Bezos once said, “Your margin is my opportunity”. Amazon has grown faster than almost any other organization by focusing on opportunities created by complacency. This includes segments of business where the following characteristics are prevalent:

Each of these characteristics could be included in today’s definition of traditional banking. The list not only defines why Amazon or another large tech company may find the banking industry enticing for entry, but why hundreds of fintech firms globally have already entered financial services.

Today, the impact of smaller fintech firms has not been overly significant. The payments business certainly has been disrupted by brands like PayPal and Venmo, and there are other examples of note. Most of the market-share shift, however, has occurred between existing full-service banks, with the largest players benefiting from their scale, ability to invest in technology and digital solutions.

The biggest disruption of the banking industry is yet to come, with the largest tech firms being in the best position to impact legacy banks of all sizes. And we are not just talking about the often mentioned quad of Google, Amazon, Facebook and Apple, who already have an abundance of consumer trust and brand recognition. We also are talking about Alibaba, Tencent and other organizations with a strong digital presence, highly sophisticated data analytics and AI capabilities as well as deep pockets.

“If the digital giants are going to invade the banks’ turf, the banks must start to act more like digital giants,” stated BCG in their report. “If they don’t, they risk being boxed into a set of risky, capital-intensive, and low-return businesses, while digital giants, or more aggressive traditional competitors, snare the most attractive businesses for themselves.”

There is no better time to build a response to a future risk than during times of relative prosperity. If banks and credit unions wait until the digital giants or agile fintech players are on the doorstep, it is too late. The areas of greatest risk are those where there is the greatest financial opportunity and the best fit from a strategic perspective. 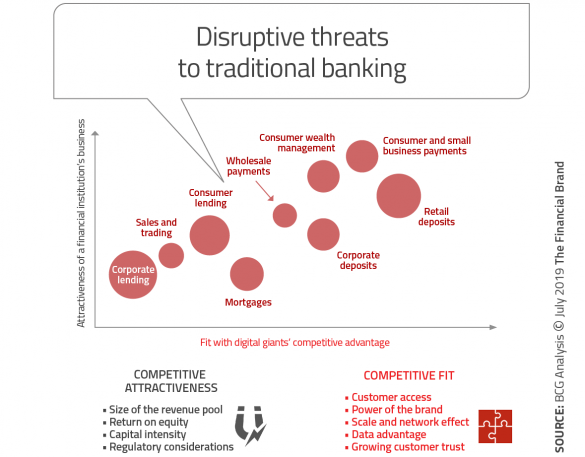 Many financial institutions are saying the right things more than doing what is needed. Often, what is being done is in the context of banking from the past, as opposed to being recreated from the bottom up as you would if you were building a digital banking organization from scratch. And many of these initiatives are still moving at a snails pace.

Organizations are building digital account opening, loan application and new customer onboarding processes, but the majority of these processes still require the consumer to come into the branch or have way too many steps similar to the paper-based processes of the past. And, while almost all organizations know the benefits of expanded data, advanced analytics and AI, very few have used these tools to personalize experiences or proactively offer solutions in real time.

As stated in the BCG report, banking organizations must look at digital transformation in a holistic manner rather than fragmented components that are not seamlessly integrated. More importantly, the direction for this transformation must come from the organization’s senior leadership and be supported by a culture that encourages innovation, digital customer experiences and aggressive market positioning. Only by becoming a digital organization from the core will a legacy financial institution be in a position to succeed.

From an overarching perspective, BCG believes digital transformation must include the following:

Don’t Ignore the Need to Change

Change is a constant and is happening faster than ever before. Some changes can be anticipated, while others will catch financial institutions by surprise. Some change will even be brought on ourselves in response to the environment we are doing business in. The key is to embrace the change that will certainly occur and to leverage these changes to innovate and grow.

One of the keys to embracing change is to be surrounded by people who not only are adaptable to change, but thrive on change. By doing so, organizations will move forward as opposed to being threatened by people wanting to do things the same way as in the past.

Now is the time to move beyond small incremental digital transformation steps. In most cases, there is capital available to invest in the future that may not be as abundant one to three years from now. It does not matter if disintermediation occurs this year, next year or five years down the road. It will happen. As stated in the BCG report, “It’s easy to ignore a new wave of disruption forming at a distance, but impossible to navigate through it once it is upon you. Banks that are not preparing now will pay a price later on.”