Subscribe Now Get The Financial Brand's FREE Email Newsletter
Why do consumers choose one checking account instead of another? Data from thousands of checking account searches reveals the hot buttons behind consumers' decisions: locations, fees, advertising and word-of-mouth.
Subscribe Now!

Using the online tool at FindABetterBank, active bank shoppers walk through a logical process to help them narrow down their checking account options. The system prompts them with questions about feature requirements and fee preferences. After they select an account as their “top choice,” they’re asked why they chose that particular account. Using the data generated from thousands of such searches, we can dissect and understand the various factors driving consumers’ decisions — features, fees, locations, promotions, etc.

Convenient locations. FindABetterBank users are all online shoppers. Yet, even for nearly a third of these shoppers, convenient branch and ATM locations strongly influence their selections. Many shoppers who indicate that locations are important end up selecting accounts that don’t rank #1 in terms of lowest estimated fees or meeting the most requirements. In September 2014, Shoppers that “must have” mobile banking were 13% less likely to indicate that branches are important. This is a harbinger for the future because many people that must have mobile banking are younger. 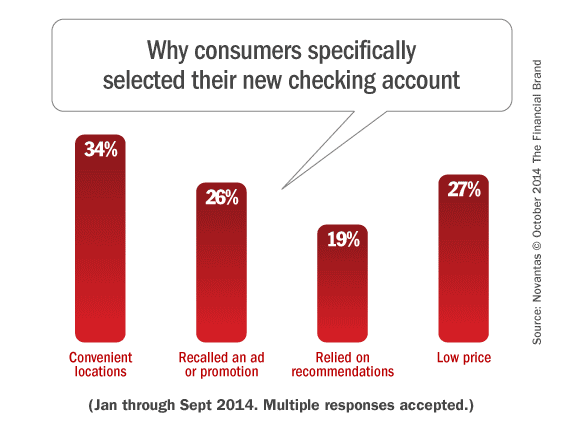 Ad/promotion. Not surprisingly because of large ad budgets, shoppers indicating they were motivated by an ad or promotion are more likely to select a national bank (e.g., an institution with 1,000 or more branches) or a direct bank. Promotions are more prevalent in major metro markets because more banks and credit unions competing for business.

Low price. Community banks, credit unions and direct banks perform better with shoppers focused on price because they’re more likely to offer free checking, have lower fees and provide access to large surcharge-free ATM networks. Interestingly, shoppers focused on price aren’t necessarily lower income. For example, 11% of shoppers selecting an account because of price reported their lowest balance is over $2000 compared to 6% of shoppers who selected an account because of convenient locations.

Recommendations. Younger shoppers, who have less experience with financial service providers are most likely to indicate that they made a selection because of a recommendation from a friend or family member.