Subscribe Now Get The Financial Brand's FREE Email Newsletter
Is Bank of America's complex Preferred Rewards program, with its 11 types of benefits and three reward tiers, worth the trouble to manage? Consider for yourself. The executive who runs the program reveals important KPIs and talks about changes imposed by COVID as well as upcoming initiatives.

Most people know of a friend or family member who is a “points maximizer.” Maybe not quite like Brian Kelly, who built The Points Guy business around the practice, but there are folks who put little stickers on each of their credit cards to clue them which to use to max the points or cash back. These people would probably love Bank of America’s Preferred Rewards program — if they haven’t joined already.

By working the program to the max, they can not only earn up to 5.25% cash back on purchases in a category of their choice (using a particular card), but get higher interest on savings and almost a dozen other benefits.

As NerdWallet explains: To get the most out of your Bank of America rewards credit card, “you need to go all in.” And that’s exactly the point of what may be the industry’s most comprehensive banking rewards program.

The benefits scale up in three balance tiers: $20,000 (Gold), $50,000 (Platinum) and $100,000 (Platinum Honors). There’s a nifty slider calculator on the BofA site that lets you easily see what you get. The image below is of the Platinum level. There are no fees to participate. 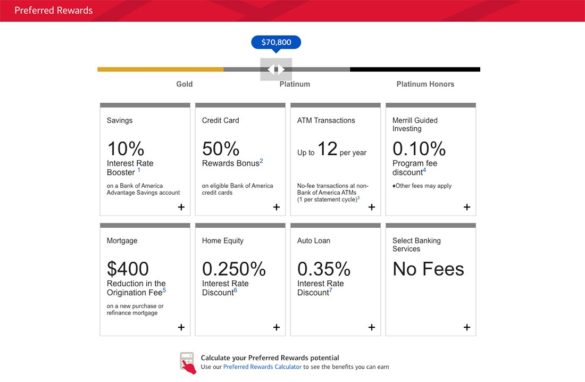 Whether you call it comprehensive or complicated, Bank of America’s rewards plan would be difficult, if not impossible to replicate. Even the executive who runs the program, John Sellers, Bank of America Rewards Executive, calls it complex, and the bank uses a video to help get new plan members up to speed. Preferred Rewards took two years to develop and was launched in September 2014. Sellers states that 12% of the bank’s retail customers are enrolled in the plan — about seven million people — and that it’s been experiencing “about a 20% annual growth rate.”

The bank also offers two other rewards programs: one for wealth management clients and another for business customers. These two account for another million rewards program members, according to Sellers.

What Plan Members Get (and What BofA Gets)

Prior to launching Preferred Rewards, Bank of America had several card-related rewards programs including travel points, cash back and gift cards. They were successful, but blended into a sea of rewards offers that were growing increasingly competitive. When Preferred Rewards kicked off, it didn’t immediately trump everyone else, particularly on a card-for-card comparison.

However, as The Points Guy observed at the time: “If you’re a BofA customer and you meet the minimum requirements, you should absolutely sign up. Apart from the enhanced credit card benefits, if you do a lot of banking through BofA, all those other benefits could result in significant savings … hundreds of dollars a year.”

In an interview with The Financial Brand Sellers confirmed this, stating that the bank hands out about $2.5 billion in rewards — roughly $450 per member per year. That’s inclusive of all three reward programs, but Sellers says that the consumer program contributes the bulk of it at this point.

Preferred Rewards clients represent “a sizeable chunk of our overall consumer assets, and we see close to 45% year-over-year growth in assets coming from this population.”
— John Sellers, Bank of America

In addition, integrated with the rewards program is BankAmeriDeals, a program in which debit or credit card users earn cash-back discounts at a variety of national retailers, restaurants and other companies. Redemption of the cash rewards and discounts is flexible. Sellers says consumers can have funds sent to checking, savings, brokerage, or 529 accounts, or to their investment account at Merrill.

Even for a megabank, however, giving back $2.5 billion to customers needs to have a payoff.

“The reward programs drive three good things for us,” explains Sellers. “One, we generally get higher satisfaction. Eight out of ten program participants are likely to recommend us to friends and family. That leads to the second thing, which is greater retention. It’s nearly 99%,” he states. “That means a lot when you’re talking about clients with significant assets with us. Our consumer program members on average have $85,000 in assets.

“Lastly,” Sellers continues, “members do more business with us.” The three rewards tiers and increasing benefits incent them to do this. He states that rewards members on average have about four products with the bank, double the average of non-rewards customers.

Overall, the 12% of retail customers who participate in Preferred Rewards are some of BofA’s most valuable clients, the executive states. They represent “a sizeable chunk of our overall consumer assets, and we see close to 45% year-over-year growth in assets coming from this population.”

How COVID Has Impacted the Reward Program

Since its inception, many Preferred Rewards enrollments occurred during a consumer’s visit to one of BofA’s 4,300 retail financial centers. With traffic down in its branches in 2020, Sellers says record numbers of reward program activations have been coming through digital channels. Given the breadth and scope of the program, that shift presented some challenges. “It’s the most comprehensive relationship rewards program out there, so there’s a lot to take in,” says Sellers. “We’ve tried to be creative in the onboarding process,” he adds, including using short videos.

In addition, the bank created a My Rewards landing page for both its mobile app and its desktop application. “You can see all the benefits you’re getting from Preferred Rewards as well as benefits that you’re not taking advantage of,” Sellers explains. The landing page also breaks out the value of card rewards and BankAmeriDeals. 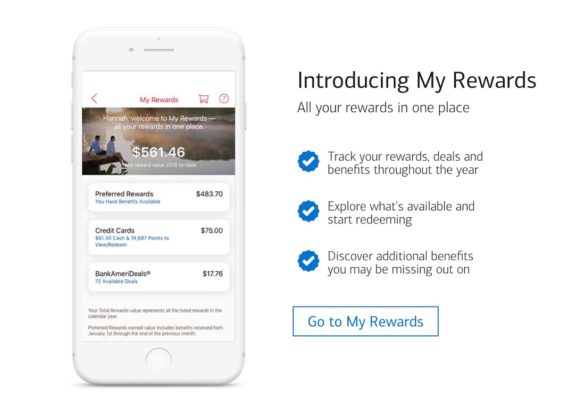 In addition to using short introductory videos, BofA each year sends reward clients a “hyper personalized” video that tells them exactly the value of the rewards that they earned through the program and focuses on ways that they can earn more next year. Sellers says engagement with these videos is much higher than with the typical marketing messaging they send.

What’s Ahead for BofA’s Rewards Program?

Further integration with Erica, Bank of America’s digital assistant, is ongoing, according to Sellers. For example, with the annual review video mentioned above, rewards members who are Erica users will get a text message prompting them to check it out.

In addition, Sellers says members will be able to ask questions of Erica about their rewards — available points or dollars to redeem, for example. The text and voice-enabled app, powered by artificial intelligence, will also begin proactively putting rewards information in front of clients, Seller says. One example: “Did you realize you just hit a milestone — $500 in rewards value for the year?”

“We’ll be able to give our clients gentle reminders about the value they have built up and how to take advantage of other rewards,” Sellers states.

The executive says they will further develop the BankAmeriDeals infrastructure, making it more robust so clients can get more, and more relevant, offers, including local offers as opposed to those from national chains.

Although the BofA reward program will remain firmly grounded on tangible benefits — rewards people can actually use, as Sellers puts it, the bank is cognizant of the broader trend toward experiential rewards, as offered by Capital One, American Express, Citibank and others. In the fourth quarter of 2020, Bank of America offered reward members exclusive access to three 45-minute live-stream event with celebrities. The bank lined up Hamilton star Leslie Odom Jr., Golfer Francesco Molinari, winner of the British Open, and for foodies, author and Top Chef host Padma Lakshmi.

Originally the plan was for in-person events, but the pandemic forced a redirect to the live-stream format. Sellers says they really liked the results and are looking to do more streaming events.