One out of every ten consumers think all checking accounts are the same. 15% are increasingly frustrated by fees, and one-third of all consumers say they are likely to switch over the issue. But nearly as many believe it’s too much of a hassle to change checking providers.

These are the findings of the inaugural TD Bank Checking Experience Index, a national survey of more than 3,000 U.S. consumers with checking accounts.

According to the study, more than half of all consumers say they only spend one or two hours per month on banking. One quarter spend between 3-5 hours. One in ten spends anywhere from six to ten hours. 8% say they spend 11 hours or more on banking every month. 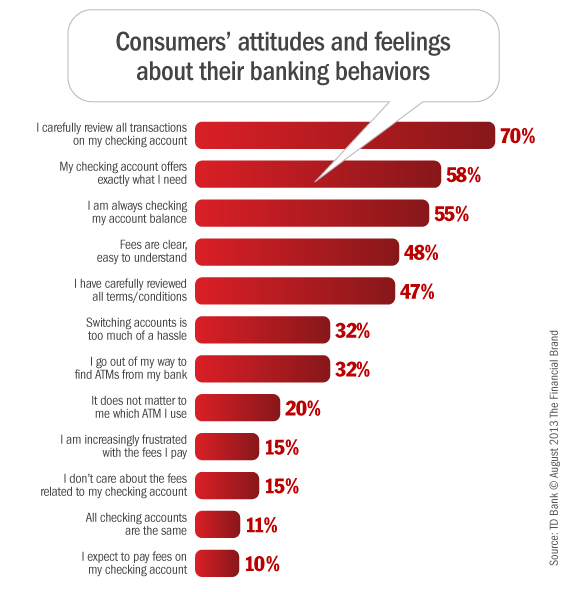 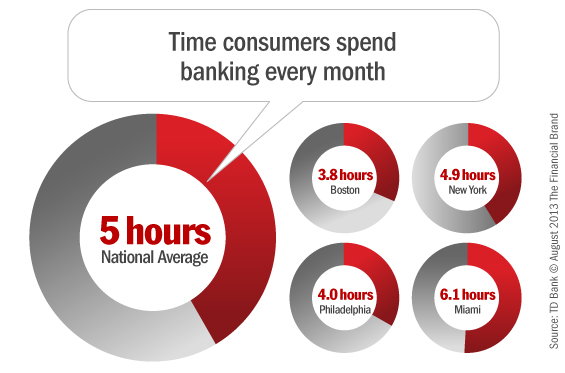 12% of survey participants said they closed or switched their primary checking account in the last two years. 39% cited fees as the main reason, while 11% said they had moved (often to another state). A poor customer service experience spurred one in ten switchers to take action. And a surprising 7% said that their bank’s lousy brand image was what pushed them over the edge. 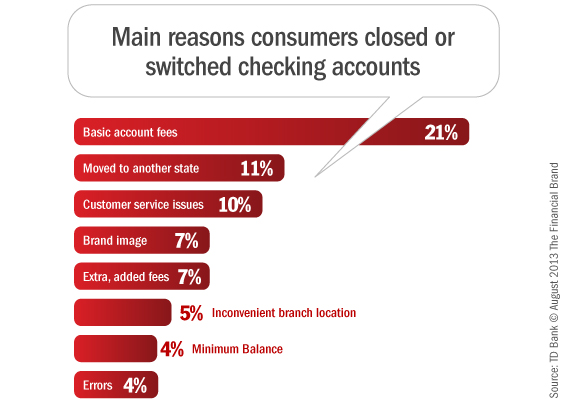 While most cited no change in fees over the past year, fees do play an integral role in consumer attitudes towards their checking account. 36% are on the verge of changing checking accounts or financial institutions due to fees. 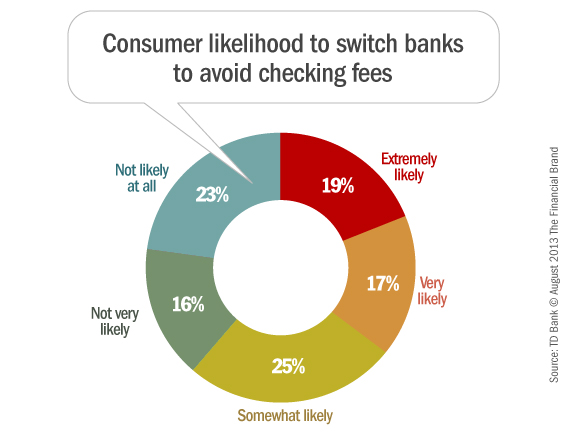 The fees that irritate consumers the most are those triggered by out-of-network ATMs; 38% say this is the fee that frustrates them most. A quarter of all consumers find overdraft fees to be the most annoying (but consumers share some of the burden here). 13% are most miffed by minimum balance fees. On average, consumers with a minimum balance fee on their checking account require a balance of $950. Only 10% are most peeved by their monthly service fee.

One in ten consumers think they should have to pay nothing for their checking account.

Read More: Most Bank Customers Think They Pay Little or No Fees

Overall, 43% say they have no fees or are uncertain about any fees associated with their primary checking account.

Consumers who pay fees related to their checking account are more likely to be actively and regularly monitoring their account, and will go out of their way to look for bank associated ATM’s.

Non-bank ATM fees were ranked most frustrating by 38% of respondents, followed by overdraft fees at 27%. Only 13% of consumers ranked minimum balance costs as the most frustrating for their account even though the TD Checking Experience Index indicated that the average balance to avoid a monthly cost is $950.

Read More: Majority Of Bank Customers At Risk Of Switching 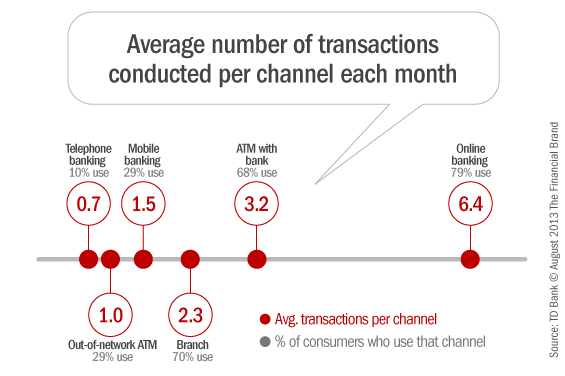 When asked to rate their checking provider, 83% said online banking was either “excellent” or “very good.” But only 63% said gave mobile banking the same grade, so there is clearly still a ways to go before consumers are thoroughly pleased with the mobile channel.

46% of consumers feel that the #1 or #2 most important thing they are looking for in a checking provider is easy online banking. Only 13% said mobile banking was a top concern. Consumers still prioritize traditional brick-and-mortar over the mobile channel, with 40% saying convenient branch locations were one of their top two priorities, and 38% citing convenient ATMs as one of their critical issues.

Read More: Bank Switchers Insist They Must Have Branches

When asked what they like most about their current checking account, one in eight consumers couldn’t come up with anything. That’s pretty sad. 31% said “fees” (presumably these people pay — or think they are paying — nothing). An equal number said “convenience/ease of access.”

Free checks are only valued by 6% of all consumers.

And here’s a stat for all those banks and credit union that think their customer service rocks: a pathetic 2% said the best thing about their current checking account is “good/great customer service.” A similar percentage cited “polite, friendly, courteous staff.” Those numbers are so puny, they hardly register.

Having a strong, trustworthy brand holds sway with some consumers. One in 20 say their favorite attribute about their current checking account is the financial institution’s brand image and reputation.

Financial institutions that want to make real, meaningful headway with consumers will find ways to make banking easier. Only 6% of consumers say their bank (or credit union) does a good job making banking simpler, easy and more user friendly.

Reality Check: There’s lots of blustering about “innovation” in the financial space, but if you aren’t making banking easier, you aren’t innovating — period.

In Boston, consumers care more about rates and fees than the rest of the U.S., with 41% saying it’s the best thing about a checking account, and 51% saying that’s the reason they would switch banks (compared to 31% and 35% nationally, respectively).

Consumers in Philadelphia noted the best thing about their checking account is convenience and ease of access, as opposed to Bostonians and New Yorkers, who rank rate and fee structures as the best things.

The study was conducted among a nationally representative group of consumers from July 24-30, 2013. The sample size of 3,025 has a margin of error of +/- 1.8%. The survey was hosted by global research company Angus Reid Public Opinion. Full survey results, regionally specific findings from Boston, Miami/Ft. Lauderdale, New York and Philadelphia and a series of infographics detailing key findings can be found here. They also provide some great breakdowns specifically for the Hispanic market.

Hat Tip: To TD Bank, for releasing the results of a survey that benefits everyone in the banking industry. They could have kept all the intel to themselves.