If Bancvue is right, it’s the weapon smaller financial institutions need to successfully compete with big banks for demand-deposit accounts (DDAs) like checking and savings products.

The firm has recently announced a combination of accounts specifically for community banks and credit unions, all unified under a single, national brand: Kasasa.

It may sound strange — the idea of banks and credit unions cooperating with one another — but Bancvue believes collective scale is the only way smaller financial institutions can fight the massive marketing muscle of megabanks.

“Think about it,” said Gabe Krajicek, CEO/BancVue, in a press release. “When a community bank or credit union prints Visa or MasterCard on its debit card, accountholders know with confidence their transactions will clear. Similarly, when a community financial institution associates with the Kasasa brand, customers will know with the same kind of confidence they’re opening the best checking accounts in the country.”

Reality Check: It takes a long time and hundreds of millions of dollars to create a brand as well-known and as trustworthy as Visa or Mastercard. 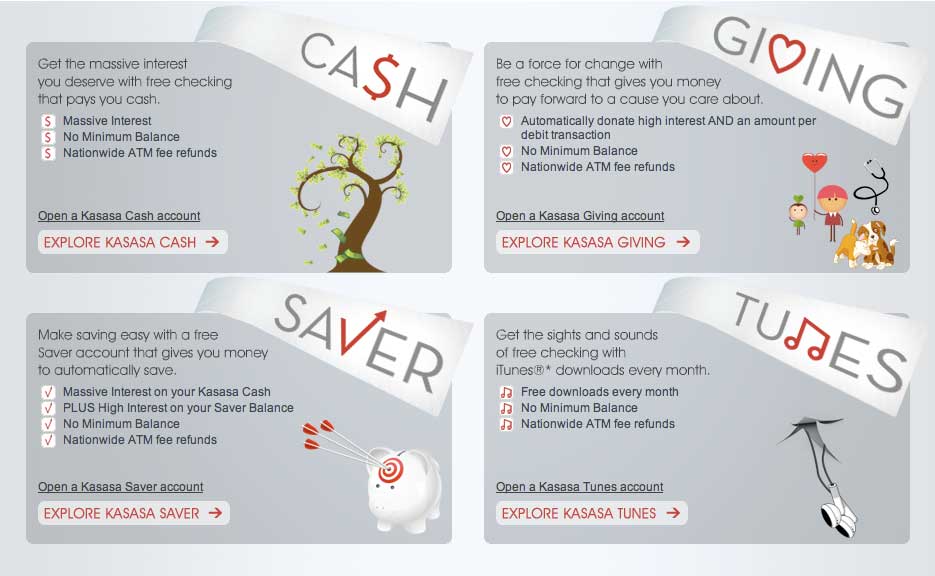 Each of the three checking accounts — Cash, Giving and Tunes — are strong products in their own right. Giving consumers the flexibility of choice is what makes the Kasasa solution so powerful.

Consumers can only earn the benefits of these accounts by meeting monthly qualifications such as using their debit cards, accepting e-statementsand making electronic transactions.

Financial institutions deploying the Kasasa line-up get a dedicated page at Kasasa’s secure website. The page helps consumers select which Kasasa product they want, then guides them through an account opening process.

Here’s an example of how Kasasa works at First Arkansas Bank & Trust: 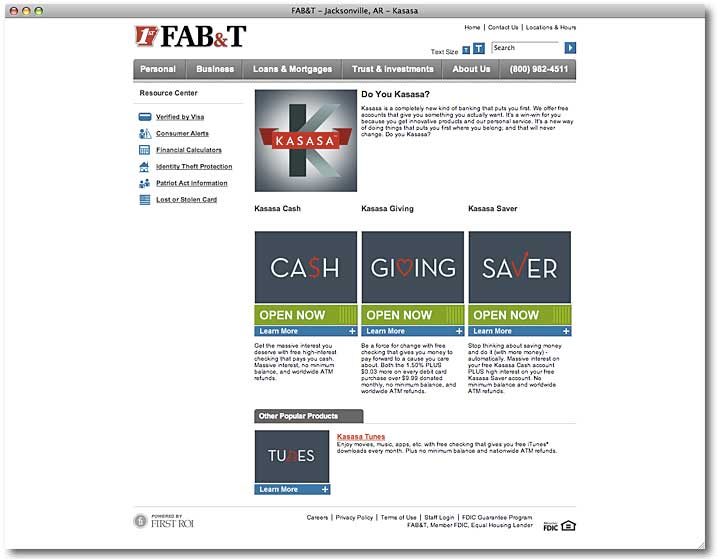 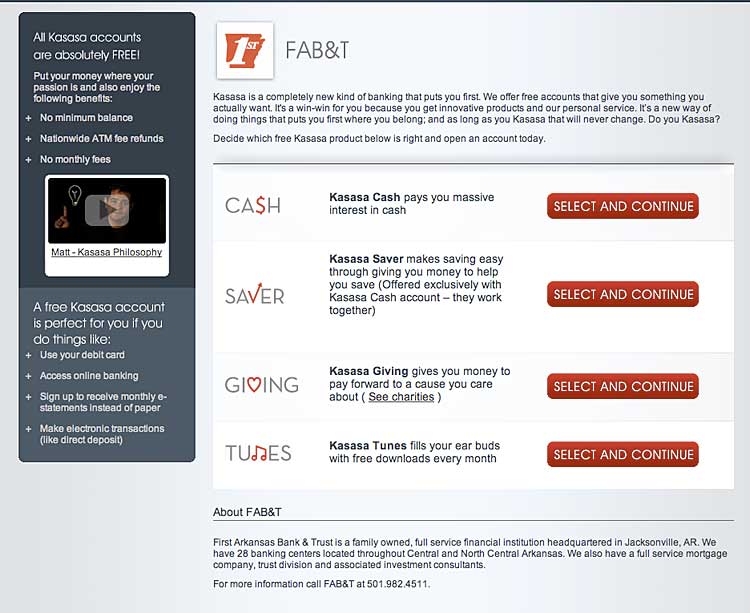 FAB&T’S KASASA
The bank promotes Kasasa products on its website (left). Customers wishing to open an account are
then redirected to an FAB&T-branded page at the Kasasa.com website to complete the process (right).

From the Makers of…

A few years ago, when Bancvue and FirstROI launched their revolutionary REWARDChecking concept, they lit the financial industry on fire. The idea was simple: If you could get consumers to adopt the right combination of services — primarily direct deposit, e-statements, online banking and bill pay — you can offer significant premiums in exchange, like a higher-than-normal interest rate or free iTunes downloads.

The product didn’t just require consumers sign-up for these services though. They had to actually use them. To qualify for the higher interest rate — sometimes upwards of 6.0% — people had to do things like make debit purchases, log into online banking and pay bills every month. It’s something called “right channeling” in the financial industry, and in short order, the two firms quickly chalked up over 600 clients.

Bancvue estimates that its REWARDChecking clients spend about $100,000 each marketing their proprietary checking accounts, or an estimated $60 million total.

“Despite this huge marketing budget and truly megabank-sized network, community financial institutions are not capturing the consumer’s attention because each has been promoting its individual brand of checking account,” said Krajicek.

“I Kasasa. You Kasasa. He/she/they Kasasa.”

“They wanted something with fun energy that could be either a noun or verb,” Susan Sierota, CMO/BancVue, said in an interview with The Financial Brand.

And they specifically wanted a coined name, “one that had no meaning so Bancvue could build its own meaning behind it,” explained Sierota.

But, Sierota said, not everyone was behind “Kasasa” immediately.

“The first time BancVue executives presented the name at one of its board meetings, the chairman said, ‘On a scale from 1-to-10, my gauge isn’t even quivering above 0,'” Shaprio recalled. “For the next five minutes the entire board began teasing them, saying, ‘Do you Kasasa?’ ‘I only Kasasa in the privacy of my home.'”

When the jests stopped, the BancVue team asked, “When was the last time anyone talked about our REWARDChecking account that way?”

According to Sierota, that’s when “the light bulb went on.”

“The name has been a huge asset and has helped drive phenomenal success,” Sierota added.

“Don’t Try This At Home”

On the surface, it looks pretty easy for financial institutions to simply “reverse-engineering” the Kasasa/REWARDChecking model and go it alone without the help of Bancvue or FirstROI. But Bancvue insists they have the secret sauce essential to making this product hum.

“There have been those that have tried to replicate REWARDChecking, but have come to realize it isn’t as easy as it looks,” Sierota said. “Some clients have left and tried it on their own, but they have come back.”

“It isn’t just the product. REWARDChecking comes with marketing support and consulting that makes the whole thing work,” noted Sierota.

“Kasasa takes it up even to a higher level of inability to emulate it. The research and design of creating superior products. The marketing creative and scale of a national brand. The consulting to ensure that accounts are profitable. Nobody in the market today can duplicate Kasasa.”

Kasasa is being offering on a limited exclusivity basis per market. Currently, there are ten banks and one credit union that have deployed it so far, including:

The results so far have been promising. In just two months of offering Kasasa as a pilot program, participating financial institutions are reporting positive numbers:

300 banks and credit unions attended “Kasasa Nation” in Dallas last month, an event hosted by Bancvue to debut the new DDA solution, so there seems to be significant interest.

But Kasasa isn’t for everyone. Megabanks need not apply. Of the six that have inquired, all have been turned down.