Subscribe Now Get The Financial Brand's FREE Email Newsletter
Though it's a small percentage of overall community bank M&A activity, the number of credit union acquisitions of community banks is drawing scrutiny. Some say the deals are driven by expansion considerations, while others insist policy loopholes are being exploited.

The whole notion of a bank-credit union combination seems awkward, given the different ownership and governance structures. Such combinations have been very rare until fairly recently. Inter-industry combinations hit a high point in 2019, and are on track to equal 2020’s pace by the end of 2021.

It’s a trend fraught with emotion and controversy, more so on the banking side, since those are the institutions being acquired. This spate of deals has stirred up long-standing policy issues relating to taxation and field of membership.

According to a review of S&P Global data by the Independent Community Bankers of America (ICBA), there were 13 such acquisitions in 2018, 21 in 2019, 15 in 2020 and ten so far in 2021. It should be noted that other analyses of this trend turn up slightly different numbers, perhaps reflecting different definitions of what constitutes a community bank, and if only whole-bank acquisitions are counted. But either way, the trend is up. 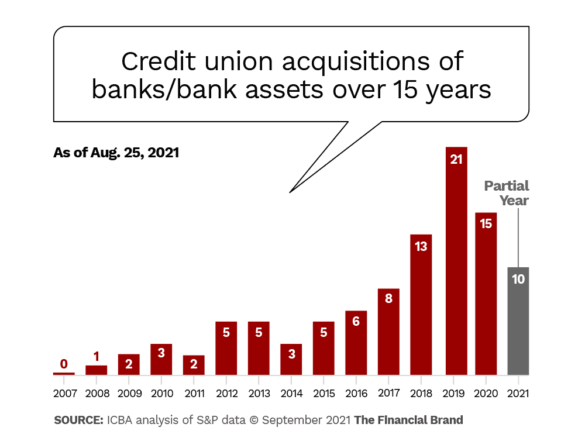 So why have acquisitions of community banks by credit unions been on the rise? One reason, according to the Federal Reserve Bank of St. Louis is similar to why any institution considers an acquisition: to achieve economies of scale.

“One way to grow, of course, is organically — building new branches or obtaining new customers via advertising or through special deals,” The St. Louis Fed notes in a blog post. “A much faster way to grow, however, is to purchase another financial institution. … Historically, the vast majority of credit unions expanding via acquisition have done so by buying other credit unions. In the last few years, however, there has been an increase in the incidence of credit unions buying banks.”

Read More: A Hard Look at the Rivalry Between Banks and Credit Unions

One of the primary reasons a credit union would acquire a community bank’s assets in particular, the Fed notes, is because it represents an easy way to expand into a line of business more associated with banks — primarily small business lending. Another reason would be to deepen community relationships in certain areas.

These are precisely some of the market forces that drive credit unions to acquire community banks, Ryan Donovan, chief advocacy officer for the Credit Union National Association, tells The Financial Brand.

“Banks tend to have more mature business lending portfolios,” says Donovan. “For a credit union it allows them to get into this business line, but they also acquire the expertise, and it gives them access to greater capital.”

One key reason credit unions look to acquire a bank is to expand further into business lending, building on the bank’s expertise.

These acquisitions can also be beneficial because both credit unions and community banks tend to have a more locally focused mindset, Donovan states.

The credit unions that acquire banks “usually keep the branches open and they usually retain the employees,” Donovan maintains. They want to continue to provide locally driven financial services.

For Donovan, credit unions acquiring banks is simply part of a larger trend of contraction in the community bank market, as many look to sell due to pressures such as increased regulatory burden or because “in some cases, it’s a family-owned bank, and the head is ready to retire, and there’s no one in the family to continue the business.”

But the issue is far from cut and dried. The ICBA recently issued a statement outlining policy changes it says need to be enacted to quell the tide of credit unions acquiring banks. The ICBA claims the credit union tax exemption is fueling these acquisitions.

It has proposed policymakers consider a number of measures, such as implementing an “exit fee” on these acquisitions to capture the value of the tax revenue that is lost once the business activity of the acquired bank becomes tax-exempt. In addition, it is pushing for congressional hearings to review how the credit union tax exemption “fuels these transactions”; and is requesting a Government Accountability Office study on the evolution of the credit union industry and National Credit Union Administration (NCUA) supervision.

ICBA wants the government to impose an ‘exit fee’ when a credit union acquires a bank to make up for lost tax revenue.

Michael Emancipator, ICBA Vice President and Regulatory Counsel, says that these types of acquisitions are “surging directly due to policy considerations, or policy that has been exploited.”

Emancipator adds that the benchmark for credit unions to be designated as serving low-income populations has been lowered in recent years, and some are using that designation to access secondary capital in order to fund acquisitions.

“There are some policy loopholes that need to be closed, or at least scrutinized and studied,” he states.

In a statement from NCUA, a spokesperson argues that credit union acquisitions of bank assets and assumption of liabilities are voluntary, market-driven transactions.

Acquisitions of community banks by credit unions in 2021

CUNA’s Donovan adds that many of these acquired banks have not been paying their full tax obligation due to financial struggles, and the acquiring credit union pays a tax equivalent to about one-quarter of the total deal value upon acquisition.

Why the Practice May Continue

Policy rows over credit unions’ tax-exempt status are nothing new, and going forward, if it makes business sense, credit unions will likely continue to explore the possibility of acquiring bank assets. In a whitepaper, advisory firm Wilary Winn, LLC, which has both community banks and credit unions as clients, says a transaction in which a credit union purchases a bank could result in beneficial outcomes provided the credit union has compelling strategic reasons to do so.

“The credit union could be ‘going on offense’ by trying to accomplish one or all of these objectives: expand into new geographic areas, add expertise it does not possess, grow membership, drive economies of scale, or diversify its balance sheet.

“Alternatively,” the paper continues, “the credit union’s strategy could be defensive in nature by, for example, purchasing a bank within its geographic footprint to prevent a competitor from entering or expanding its presence in the credit union’s marketplace.”

The trend may or not be snuffed out by regulatory action, but few would dispute that the pressures underlying consolidation among both banks and credit unions will continue to grow.