Subscribe Now Get The Financial Brand's FREE Email Newsletter
With megabanks controlling two-thirds of the small business market, how can community-based banks and credit unions hope to compete?
Subscribe Now!

Approximately two out of three small business owners name one of the top six megabanks as their primary financial institution (PFI), leaving the scraps — the remaining 32% — to be divvied up between regional banks, community banks and credit unions.

By comparison, just 41% of retail consumers cite a megabank as their PFI, with regional banks, community banks and credit unions each controlling approximately one out of five consumer relationships.

These harsh realities of market share in the small business banking market are among the many challenges facing community-based institutions that were revealed in a study in fielded by Raddon. 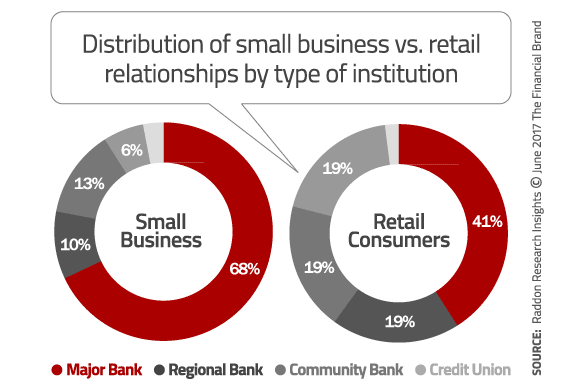 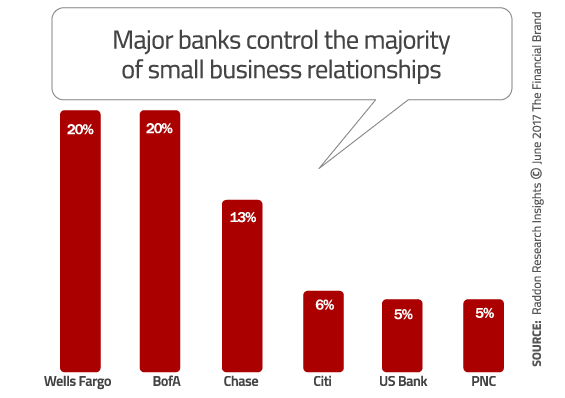 Raddon’s research highlighted the importance of PFI status with small businesses. For instance, PFI status significantly increased the likelihood a small business would consider their institution for future needs. Participants who said they sought a loan in the past three years were most likely to apply for that loan with their PFI.

Raddon asked small businesses to indicate the relative importance of various attributes: branches, expertise, price, service, technology, etc.. Participants were asked to rate each attribute by assigning it a value between 1 and 100. Respondents placed the most emphasis on price, with an average of 26.7 of the 100 available points allocated to more favorable interest rates and minimal fees. 91% of the firms made some sort of point allocation to price. 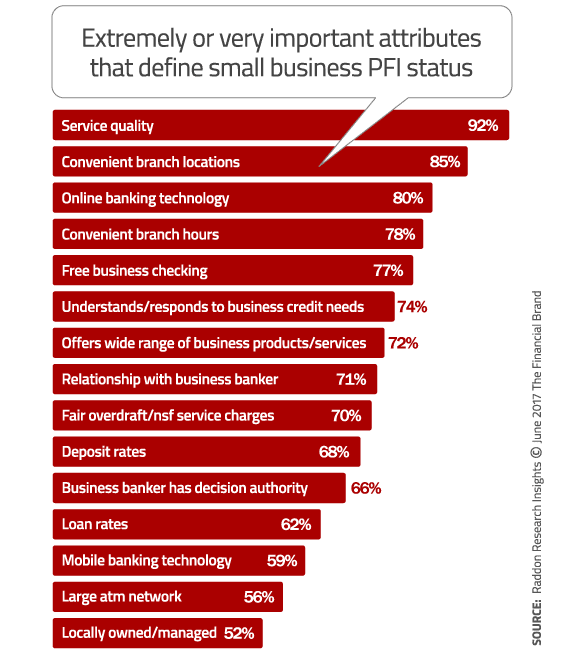 Raddon was able to identify subtle but important differences between the type of small business that would gravitate to a megabank vs. a community bank or credit union (see table below). While all small businesses prioritize price, service quality and convenient branch locations, small businesses that are open to working with credit unions place a greater emphasis on free checking and downplay the significance of online banking technology. And for as much as retail banking providers like to talk up the “local” message (e.g., “We have local business bankers who understand our community”), respondents in Raddon’s research didn’t feel it was a critical aspect in their decision, with only one notable exception: small businesses that preferred community banks felt that the “local” angle was an advantage — not so much for credit unions.

Personalized service is highly valued by small business owners. Although the role of business bankers is critical, Raddon says the notion of quality service extends beyond a single employee. In fact, more than one in three (35%) small business owners cited tellers as their primary point of contact at their PFI.

Raddon says this suggests that service quality should be an organizational effort and that all employees need to be familiar with and be able to promote the institution’s business products and services.

The majority of small businesses who banked with a big bank had a more specialized point of contact — a business banker. But this leaves big banks vulnerable. Of the 59% of firms that had a single point of contact for non-transaction needs, 40% were “extremely” or “very likely” to follow their business banker to a new financial institution should they change jobs.

Raddon’s research also found that the average small business uses two financial institutions to accommodate their business banking needs (not including institutions they may use only for a credit card). That prompted Raddon’s research team to examine whether regional/community banks and credit unions might be successful at capturing at least the secondary accounts of small businesses.

However, small businesses tend to “go with what they know.” The findings indicated that a small business will typically use the same type of financial institution as both its primary- and secondary institution, meaning that if their PFI is a megabank, then they will be more likely to choose another big bank as their secondary provider.

Of the 47% of small businesses with a major bank PFI that use more than one financial institution, approximately half (49%) said they use another major bank to fulfill their secondary business needs. The same trend generally holds true for those whose PFI is a regional/community bank or credit union. They may use a different secondary institution, but they tend to gravitate towards the same type of institution.

In Raddon’s study, small businesses expressed a willingness to using other types of financial institutions. 51% of respondents that currently did not use a community institution for their primary or secondary institution were “extremely” or “very likely” to consider using one in the future.

Regional banks shared a similar trend, with 45% of non-regional bank business customers likely to consider using a regional bank in the future.

For the businesses that were unlikely to bank with a community bank or credit union, simply being satisfied with their current financial institution topped the list of reasons why they would not consider switching banks. Branch convenience and availability weighs heavily on the minds of these small business owners, with 31% citing the lack of branches as a reason they wouldn’t bank with a community bank or a credit union. The product menu also plays a significant role. 25% indicated they would not use a community bank because their current institution (likely a major bank) offered a better business product menu. 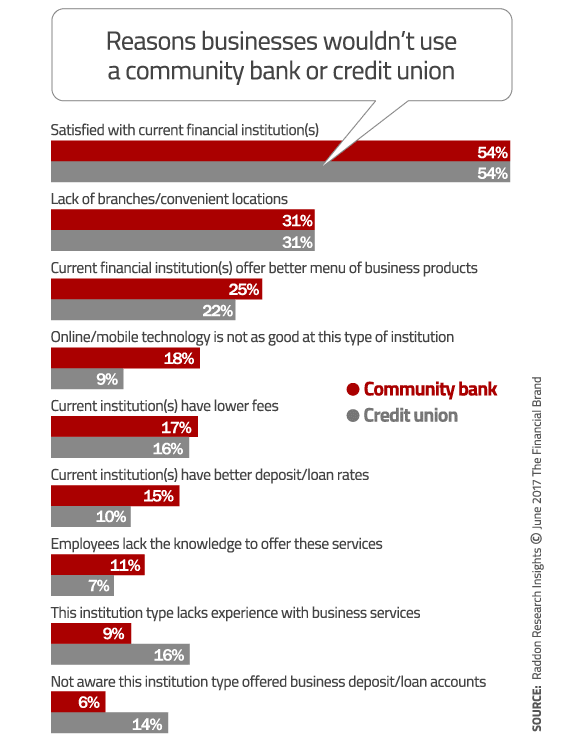 Deposits Trump Loans When It Comes to Acquisition

Loan generation may present more revenue opportunities than deposit accounts, but Raddon says deposits should not be ignored. This is because one in three small businesses operates without any loans at all, and the 66% that carry loans tend to use their PFI — the one with their deposit account — for their loan needs. In short, deposit products serve as the entry point for future loan business.

Other data from Raddon’s research supports an emphasis on the acquisition of small business deposit accounts.

The entire 48-page report, “Winning Small Business Customers,” from Raddon Research Insights is available for purchase at the Fiserv website. It includes 47 charts, tables and figures, along with 11 strategies that community-based institutions can use to win more market share.