Subscribe Now Get The Financial Brand's FREE Email Newsletter
Many banks and credit unions are struggling to find new customers. A potentially highly profitable segment might be hiding in plain sight. Independent contractors, aka gig workers, are not only huge by numbers, but eager to open bank accounts. Many, however, expect integrated digital features that many financial institutions may not currently offer.

Almost 21% of the United States population is looking for banking options that suit their needs, primarily because what they have right now isn’t sufficient.

Who are they? Independent contractors, also referred to as independent workers and gig workers.

Not only are these “untethered” workers looking for new banking options, but they are growing collectively very rapidly. Jobs platform MBO Partners estimates that over half of all U.S. workers will be independent by 2025.

Yet, large chunks of this population don’t have the banking tools they need to run their solo/small businesses or work in their respective fields, according to new data from Abound, which assists in providing benefits via APIs. That makes the segment potentially one of the most receptive to opening new bank accounts.

“This means that banks wanting to serve a new target audience and grow the future of the independent economy can step into this gap in the industry,” an Abound report reads.

And there is a fairly large gap. The majority (51%) of independent workers don’t have a separate account for their business income and instead funnel their self-employed income into personal accounts, Abound states. Of those who pool their funds into a single account, almost half (46%) say they would like to open a new, separate business account in the next year — which the software company estimates to be 16 million of the 68 million independent workers in the industry today.

On top of that, over two-thirds (68%) of independent workers say they are likely to change their current banking provider altogether in the next year.

Community banks and credit unions stand to benefit from the gig worker boom, but are up against a cadre of specialized neobanks.

Gilad Uziely, Co-Founder of Lance — a neobank specializing in the freelance movement — says that these financial products for independent workers will need to be flexible, among other attributes.

“Flexibility will accommodate the increasingly dramatic shifts independent workers take between work contexts and their related finances. It’s never been easier to shift from one job to multiple income streams — thanks to marketing software, ecommerce platforms and marketplaces,” Uziely maintains.

A Glance at the Independent Workforce

Independent worker is a loose definition in the 21st century. Abound says that the term can include independent contractors, freelancers, content creators and on-call workers (such as nurses and professionals in the health industry). As mentioned, they are also referred to as gig workers, which the independent world often correlates with the Doordashes and Ubers of the world.

For its report, Abound surveyed more than 400 U.S. adults who identify as independent workers and earn the majority of their income from 1099 work. It did not survey gig workers who self-identified that their primary 1099/non-employment earnings resulted from rideshare or delivery platforms — i.e. they exclusively earn income via Uber, Lyft, Doordash, Instacart and similar apps.

Here are key demographics uncovered by the survey:

Level of experience as an independent worker

For independent workers who have bank accounts already: 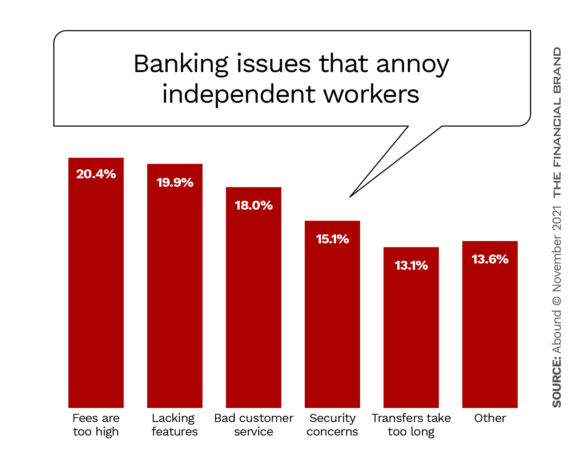 This is a big deal because more than one out of two (52%) of Abound’s respondents said they would switch to another banking provider if they offered lower fees. And although many freelancers put their faith primarily in traditional financial institutions, the lower fees are also what attracts different segments to neobanks (26.1%).

Broken down, the fees that frustrate them the most are monthly maintenance fees and overdraft fees. 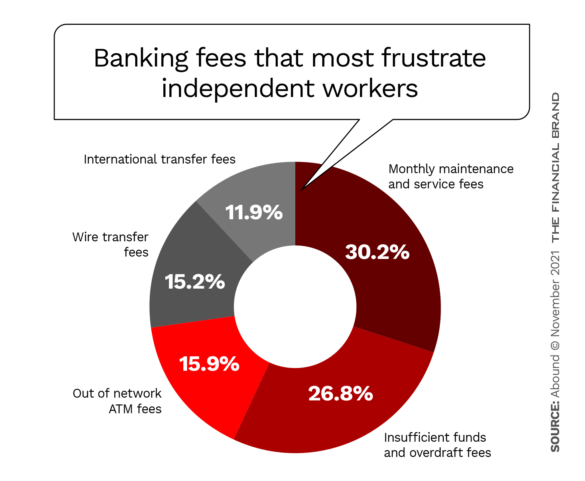 There are other reasons people are drawn to digital-only competitors: almost a fifth (19.6%) say it is must quicker to open an account (which is crucial to independent contractors who don’t have time to spare) and another 17.4% don’t trust big banks. Still others say digital-only banks offer better customer service (13%) or better features (10.9%).

The pivot to a tech-centered neobank is simple for many independent workers, Eytan Bensoussan, CEO and Co-Founder of NorthOne states in the Abound report, because challenger banks understand the art of simplification for customers.

“The future of banking for independent workers isn’t traditional bank branches with free coffee and pens, it’s mobile-first banking powered by teams and technology focused on making the hand-off between work and banking as seamless as possible,” Bensoussan argues.

However, many consumer-focused neobanks don’t offer enough for these workers. To serve this emerging workforce adequately, banking providers need to address both sides of the balance sheet, observes Hantz Févry, Co-Founder and CEO of gig worker fintech platform Stoovo. “Why should a bank just keep your money? Why can’t banks help you earn more, save more, and manage expenses? The future of work is already here, banks just need to catch up,” Févry says.

A handful of neobanks, like NorthOne, specialize in serving the needs of small businesses or independent workers. Others include Rho, Mercury, Lili, Indi, Lance, Oxygen and Novo. These digital-only challengers are what traditional institutions are up against. But, as noted in the bullet point above, only a little under 10% of the banked gig market is using a digital-only provider so far.

Abound’s report says independent workers are looking for “a business bank account that will help them navigate the financial management that comes with being self-employed.” Ideally, it would also:

If people were to leave their current banks, over a quarter of them (26.1%) said the primary feature they’d leave for would be the ability to manage and categorize expenses. Another one out of ten would like integrated technologies for bookkeeping and invoice tools.

“We believe the future is banking, taxes, and expense management all-in-one, designed to save independent workers time and money, so they can focus on what they do best,” says Ayal Levin, General Manager at freelance neobank Lili.

There are some easy solutions, however, and it just means that banks and credit unions need to start building features for independent workers into their existing offerings. 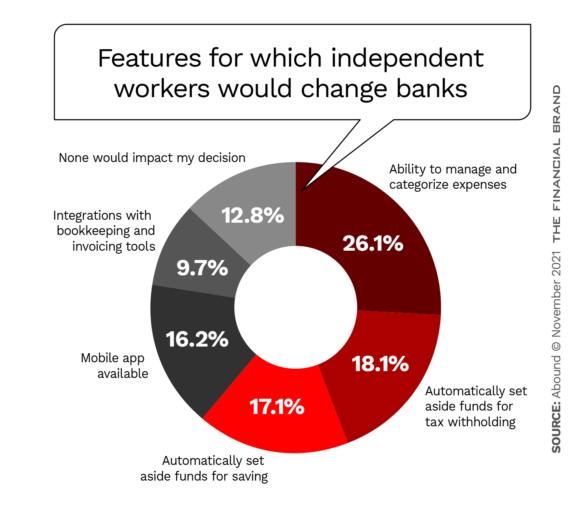 “Independent workers inherently are — or quickly become — goal-driven. Independent workers don’t want to land on another blog post about banks’ standard checking and savings rates. They want savvy financial platforms to guide them to realizing their goals, faster,” Uziely maintains.

Other banking features that many independent workers are looking for is more help dealing with an emergency (25.2%) and retirement savings (24.9%). Respondents also reported wanting help with different kinds of insurance, such as business (20.2%) and healthcare (16.4%).

“For independent workers, the most valuable commodity they have is their time,” Michael Rangel, Founder & CEO of Novo, states in the Abound report. “In the coming years, I anticipate we’ll see many more banking products give independent workers the tools to accomplish all of their banking needs in minutes, right from their phone, which will give them more time to focus on doing the actual work that makes them money.”