Subscribe Now Get The Financial Brand's FREE Email Newsletter
The self-employed and freelance workforce is only expected to grow in significance, which could challenge traditional banks and credit unions that aren't yet equipped to meet this segment's needs. The neobank Oxygen was created to address gig workers' financial issues and has seen rapid growth. Top execs explain what makes the mobile brand tick.

With the pandemic receding from front-page news, more people are returning to the office. But not all of them.

There are roughly 59 to 68 million people who the world refers to as “gig workers” still in the workspace. Small Business Labs and Gallup estimate that almost a third (29%) of these workers have made an alternative work arrangement their primary job. And of that group, 23% do this full-time and nearly half (49%) are part-time.

MBO Partners, a job-sourcing platform, predicts that over half of all U.S. workers will be independent by 2025. It’s a population that traditional banking is largely overlooking.

As noted in an earlier article, the majority (51%) of independent workers don’t have a separate account for their business income and instead funnel their self-employed income into personal accounts, according to a 2021 report by Abound. Of those who pool their funds into a single account, almost half (46%) say they would like to open a new, separate business account in the next year — which the software company estimates to be 16 million of the 68 million independent workers in the industry today.

Many digital banks have nudged their foot through the open gap in the gig doorway, but one in particular, Oxygen, has notable success in getting banking services to this underserved segment. The neobank launched its initial products in 2019 and has amassed some 600,000 customers and attracted $500 million in capital.

The big idea behind the digital bank is that it is offering personal and business accounts to freelancers, who Oxygen’s team have found are typically underserved in banking.

“The U.S. gig economy is booming, and in the current environment we will only see that increase. Unfortunately, some traditional institutions aren’t adapting,” says CEO and founder Hussein Ahmed. “That’s leaving the newest generation of workers and those who are self-employed short on options.”

Keep An Eye Out:

Covid-19 might be losing its influence on the U.S. workforce — but that doesn’t mean everyone is returning to traditional jobs.

The Financial Brand spoke with Oxygen’s Senior Vice President and Head of Business Development and Strategic Partnerships Ryan Conway, who explains why the gig workforce will continue to grow in 2022 and beyond.

“Layoffs at the outset of the pandemic absolutely led to our early growth in 2020,” Conway explains. “What we’ve seen since then, largely driven by a quick recovery from the pandemic economic crash, is more people are choosing to work for themselves.”

Conway believes this subset of consumers — who were initially driven toward the gig economy following ‘the Great Resignation’ — isn’t going anywhere, even as Covid-19’s chokehold on the workforce eases up. “These are the people we are building for, and I think they are here to stay.”

What Got Oxygen Started

Oxygen is one of the first U.S. neobanks which, at launch, offered both consumer and small business accounts.

Like many good ideas, Oxygen resulted from a “pain point.” Ahmed capitalized on an issue that he himself ran into when he was a freelance startup consultant.

“That’s when I stumbled upon the market segment we are serving today,” Ahmed said in a podcast last year. He was working from a WeWork space and realized that “everyone around me, from photographers to real estate brokers to accountants, were facing the same problem” — the difficulty of handling the mix of personal and business finances.

Meeting the Needs of Customers:

Self-employed individuals are looking for a mix of personal and business accounts that work together.

Conway explains the need by alluding to a quote from Jay-Z who said, “I’m not a businessman. I’m a business, man.”

“That is how a lot of our customers think,” Conway says. “They don’t distinguish between business and personal. To them, they are the business. There’s no 9-5 here.” Oxygen was created to provide some balance and order for people juggling business and personal accounts.

Before launching Oxygen, Ahmed jumpstarted Transpose Technologies, a software company designed to help businesses manage their backend projects and data with a single platform. He also has had technology experience at Amazon, Virginia Tech and Microsoft.

Conway joined Ahmed in August 2019 after extensive work in the payments sector, with a portfolio of jobs at Mastercard, Worldpay, BlueSnap and others.

What Sets Oxygen Apart from Banks and Other Fintechs

The digital bank puts popular features into the hands of gig workers, such as cashback on debit card purchases, which for small businesses, can be significant. What differentiates Oxygen, however, is its suite of services — some of them unusual — that it offers specifically to its business populations.

For instance, small business and entrepreneur customers can create an LLC and model their cashflow right in the Oxygen mobile app, according to Medium.

Yet, if anything makes the digital bank stand out, it is its unconventional rewards program — called Oxygen Elements — which offers four different levels of rewards for cardholders.

In a partnership with CompoSecure, a premium credit and debit card manufacturer, Oxygen’s rewards program goes head to head with those of card giants like American Express and Chase. 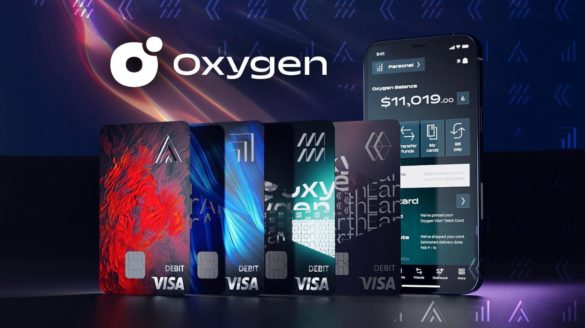 Other basic services (which are also included in the other three tiers) include:

Oxygen Water — ‘Your Space to Flow’
The Oxygen Water Account has an annual fee of $19.99. Cardholders must also have met the initial qualification of either depositing a total of at least $1,500 or spending at least $500 over the course of 30 consecutive days.

If they do, it brings a significant step up. For one, cardholders receive a metal card, 4% cashback (in addition to the $1 on food and coffee), savings accounts with an APYs of 1%, and ten savings goals.

Oxygen Air — ‘Your Space to Breathe’
The third tier — Oxygen Air —carries a $49.99 annual fee, and requires deposits of $3,000/month or spending of $1,000/month for 12 consecutive months to be waived. It comes with the metal card, 5% cashback (in addition to the $1 cashback on food and grocery) and a 2% APY on savings accounts.

Additionally, there are unlimited savings goals and two-month reimbursements on Netflix and Peloton subscriptions.

Oxygen Fire — ‘Your Space to Ignite’
Oxygen Fire, the digital bank’s final tier, keeps up with the likes of premier credit cards from American Express and Chase. With a $199 annual fee (waived after meeting certain annual qualifications), the metal card is engraved, and customers can earn 6% cashback and a 3% APY on savings accounts.

This tier also comes with the unlimited savings goals and full reimbursements on Netflix and Peloton subscriptions.

Conway says that numerous digital players in the banking world are seeking to cater to overlooked and underserved consumers. Oxygen is focused on that, but also helping customers get to the next level after they feel comfortable with their finances.

“We asked ourselves ‘Supposing we do our job, where do customers go from there? How can they continue to grow wealth?'” he says about the tiers. “The answer seemed to always be ‘somewhere else’. We didn’t want to fall into that trap.” The marketing and design of the campaign was designed by the digital bank’s in-house Creative Director Sani Gad, who oversees branding and style.

There’s something to be said of a financial marketing team that is fully tuned into its primary audience and can cater advertising campaigns to target this audience specifically.

For Oxygen, that meant putting their advertisements on the rear end of the bus — not along the side.

“We decided to go for the back of the bus, which is ten times cheaper than the side of the bus, but if you are working for Instagram or DoorDash, then you are actually spending your day behind the bus,” Ahmed told Medium in a podcast. 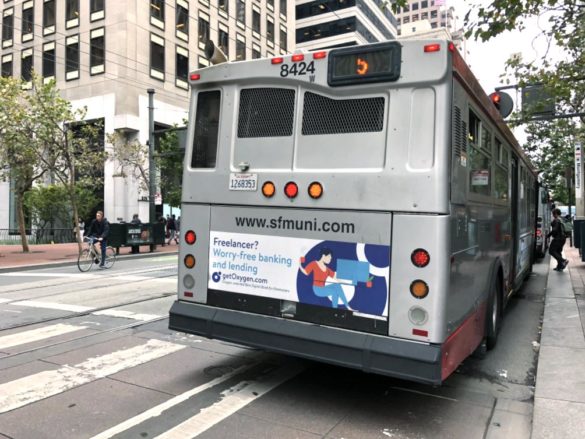 Conway says the Oxygen team has experimented plenty when it comes to marketing. Their most recent campaign — which garnered some 136 million views and strong traffic to the site — was a music video collaboration with DJSnake, Ozuna, Megan Thee Stallion and LISA of BLACKPINK.

“The hype for the video, which features the Oxygen app, was off the charts along with a worldwide debut countdown,” Conway says.

Ahmed told Crowdfund Insider in 2021 that it might look to adopt a national bank charter. In his interview with The Financial Brand, Conway says they are “still assessing” that option. He does note, however, that the company is looking to soon offer more financial products.

“We continue to grow at a fast clip so we are just trying to keep up with it,” he says. Oxygen is also hiring across different sectors of the business, including engineering, product, marketing, operations and fraud mitigation.