Subscribe Now Get The Financial Brand's FREE Email Newsletter
The Federal Reserve raised interest rates three times in the last year or so. With a strong economy and continued low unemployment, expect rates to continue their upward trajectory. In response, banks and credit unions will need to change how they market their deposit products.

In a low interest rate environment, it’s natural that deposit products will fall out of favor with consumers. The average interest rate paid on a savings account is 0.07%. For an interest-bearing checking account, the average is 0.04%. Money market accounts and CDs pay only slightly higher rates. For the average consumer, it’s pretty paltry. For many, it might as well be zero.

According to research from Raddon, a Fiserv company, few consumers have plans to buck this trend — even if rates rise. Raddon asked consumers if they planned to open a CD or money market account in the next 12 months, and based on the findings, there will be a 40% decrease in demand in CDs and a 50% decrease in both money market- and savings accounts.

Just How Important are Rates?

Even in a low interest environment in which consumers are earning but a pittance on their deposits, most consumers don’t wait for a rate that will get them to switch to a bank or credit union with more attractive returns. Almost three-quarters don’t pay attention to interest rates at all, and only 7% watch interest rates with the goal of switching institutions. 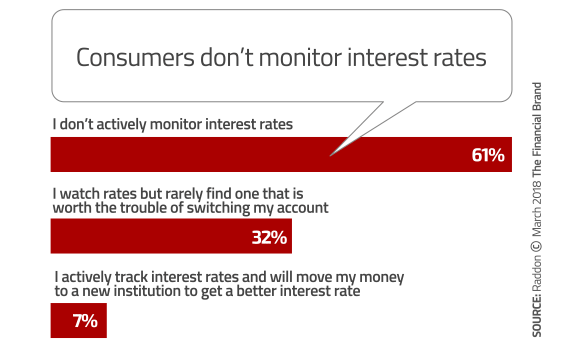 What is it going to take for people to move their funds? Six out of 10 said they are waiting for higher deposit rates. When asked how much higher, two-thirds said they would move funds for a 1.00% increase (or more). 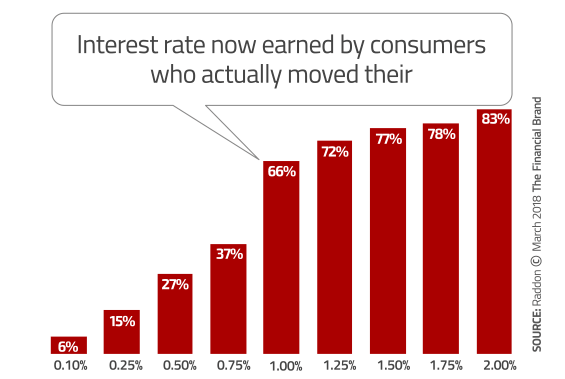 “Do you want to reprice all your funds with the federal funds rate increases or create new products and make customers move funds?” Raddon asks banking providers in their report. “If you wanted to make customers move funds to a different account, research indicates that rate should be 82 basis points over the current rate. If you wanted to attract new money from outside the organization, 96 basis points over the competition is the sweet spot.”

Getting Consumers to Invest

Consumers remain skittish about investing. In 2007, 51% of consumers had an investment product. By 2017, the percentage decreased to 37%. The only investment products that saw a slight uptick in consumer usage are individual stocks and individual bonds. Consumers are also less likely to use retirement plans. In 2007, 66% used plans such as 401(k)s, IRAs and Roth IRAs. By 2017, only 57% of consumers used those products. 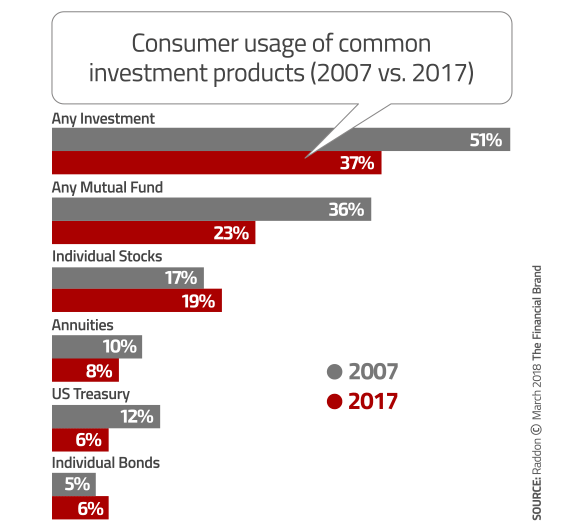 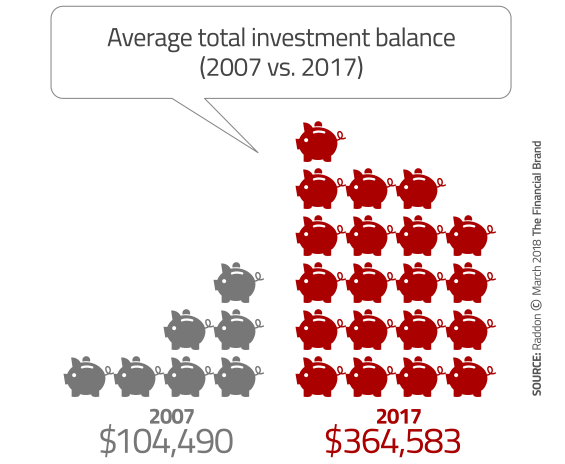 When consumers do invest, it’s not typically through their bank or credit union. Only 8% of consumers look to their primary financial institution for investments. How can banks and credit union develop investment products to gain noninterest income?

There’s increasing competition for investments. Online financial planning and robo-advice is used by only a small percentage of consumers, but that percentage is likely to grow. These digital tools offer lower fees than traditional investment advisors, putting banks and credit unions at risk of losing assets to digital products, especially for price-sensitive savers.

Banks and credit unions should consider if a robo-advice platform option makes sense as a way to retain current assets and grow additional assets, particularly from middle-market consumers.

Only 13% of consumers use a personal financial management (PFM) program — surprising since many consumers express the need to get control of their financial picture. An additional 5% of consumers have used PFM tools but don’t do so any longer.

The clear leader in PFM is Quicken, the choice of more than half of those consumers using PFM. A distant second are Mint, followed by PFMs from banks and credit unions. The most common usage for PFM is as an expense tracking tool. With so few consumers using PFM, there’s an opportunity to banks and credit unions to bundle PFM as part of their savings and investments offerings. 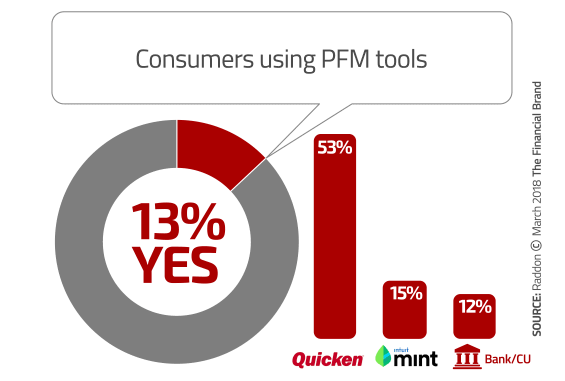 For banks and credit unions, high rate accounts have been a solid way to increase deposits. However, these high rate accounts with minimum balances of $10,000, $15,000 or $25,000 have a limited appeal since many consumers can’t meet the minimum deposit requirements. And, as a result of the low-interest rate environment, consumers find these products less attractive.

To keep these deposits flowing in, Raddon suggests making a few changes to your high rate products. Raddon found that — interest rates being equal — the most attractive account is the one that has unlimited checks. Since people don’t write nearly as many checks as they used to, it seems a bit ironic that consumers — particularly among those with high balances — would see such value in free checks. (This is good news for banks and credit unions: you can offer a high-rate checking account with unlimited check writing.)

In 2007, 11% of consumers were using an internet-only savings account. Usage is now up slightly at 14%. Usage of high-rate checking has declined from 4% in 2007 to a measly 2% in 2017, no doubt a result of the low interest rate environment. But Raddon suggests this may change in an environment with rising rates.

“Consider going to the market with a high-rate checking product to differentiate from high-rate savings products,” say Raddon. “Consumers prefer the unlimited check writing usually provided with those accounts, and with the use of checks declining they are a much less expensive proposition than they have been in the past.”

However you retrofit or rebrand your savings and investment products, keep in mind why consumers have these products in the first place. While saving for retirement is a top reason, it’s not the driving factor for many consumers. Consumers are more interested in having emergency savings and “fun” money. Make sure that your products reflect those goals. 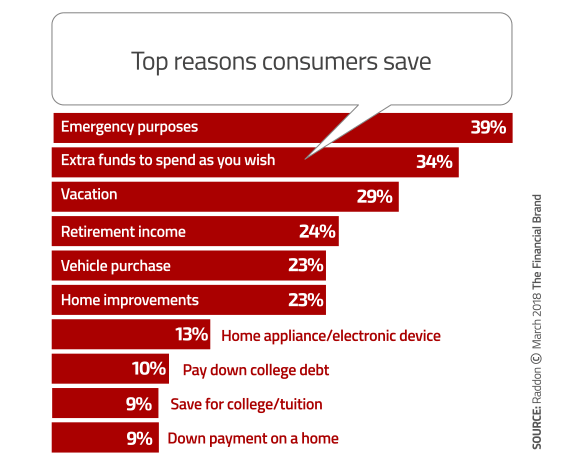 Seems that CDs and money market and savings accounts aren’t cool. But, consumers — particularly Millennials and Gen Z — want to save. The question is how to make traditional CDs more attractive.

If you want to increase CD usage, there are a couple of changes Raddon suggest you consider. Raddon gauged consumer reaction to changing traditional CDs to bump rate CDs, rising rate CDs and no penalty CDs. Of the three options, consumers really liked the no penalty CD. Raddon says if you want to attract more deposits, consider offering at least one non-penalty CD.

For example, internet-only Ally Bank offers a no penalty CD as well as a rising rate CD which allows consumers to increase their rate once over the two-year term or twice over the four-year term. 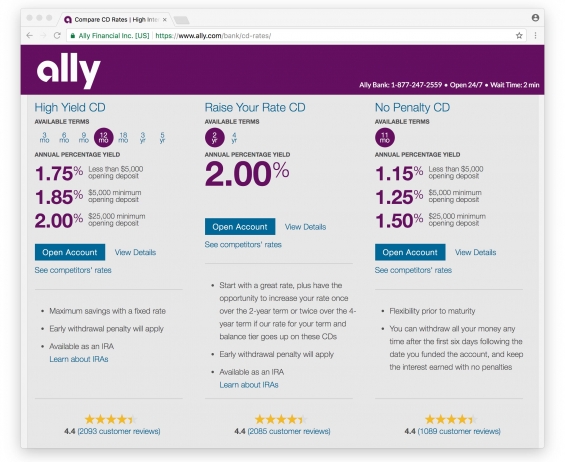 Notice how Ally offers all three types of CDs — high-yield, raise-your-rate and no-penalty — with various terms you can click on, customer ratings and (of course) online account opening.

While enhancements such as no penalty CDs are a relatively easy way to attract more CD dollars, another strategy is to rebrand your CDs altogether. Let’s face it: “certificate of deposit” does sound a bit old school, and many consumers — especially younger ones — may be hesitant to lock their money up in a product for a pre-determined amount of time, even if it’s branded as a “no penalty CD.”

A CD really is a savings vehicle so why not rebrand it that way: a “term savings account.” After all, what does “certificate” mean — consumers might be confused by the term.

Or, since consumers often use CDs to save for a long-term goal like a down payment on a home or car, Raddon suggests rebranding your CD offerings as a down payment savings vehicle. Or those consumers trying to save a three to six-month emergency fund, how about bundling a product with a laddering feature?