Subscribe Now Get The Financial Brand's FREE Email Newsletter
More and more consumers have been hit by deteriorating financial health, including people who had been somewhat insulated in the past. With a hawkish Federal Reserve going after inflation, pressure on consumer wallets is increasing. Here's a look at the landscape, with ideas on how to react.

With the return of significant levels of inflation, even financially healthy consumers are starting to feel the impact of higher prices in multiple ways.

One is the run-up in credit card debt resulting in part from efforts to temporarily ease inflationary pressures on household budgets. That’s cause for concern with a potential recession just over the horizon and indications that the Federal Reserve’s anti-inflation efforts are taking precedence over attempts to engineer a soft landing. Fed Chairman Jerome Powell has already predicted that the job market will soften.

Two studies, one from J.D. Power and the other from the Financial Health Network (FHN), have delved into the impact of inflation on consumers. The studies’ findings have implications for lending and deposit-gathering by banks, credit unions and fintechs.

“Financial health declined for the first time in five years of Pulse research, as the proportion of people considered financially healthy decreased over the past year.”

“Greater financial health declines appear to be on the horizon as inflation shows no signs of letting up, debt levels rise, and loan delinquencies grow,” the FHN financial health report says.

Prices Are Outstripping Many Americans’ Income

Seven out of ten consumers say that the prices of the things they buy are rising faster than their pay, according to J.D. Power data gathered in June 2022. 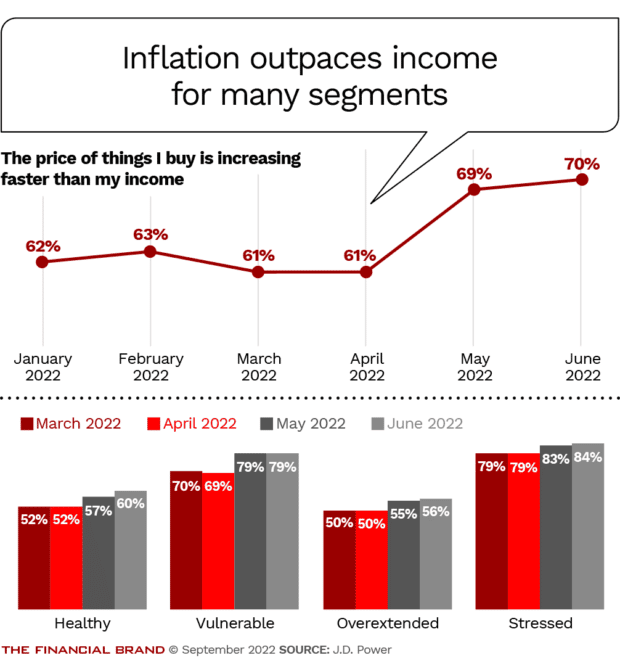 “Amid high inflation, Americans have begun to turn to credit cards to help shoulder their monthly burden,” J.D. Power stated in an article about financial health trends. “Unfortunately, it seems that some banking customers have chosen to carry higher credit card balances without knowing the extent to which that will affect their credit score — a sign that the after-effects of inflation may be felt by Americans for years to come.”

Morning Consult, in computing its Financial Well-Being Scale for July 2022, put a figure on the impact of inflation on consumers’ wallets. It says the change in self-reported financial well-being from July 2021 to July 2022 is the equivalent of everyone seeing a drop of $14,250 in annual income.

There have been anecdotal reports in the New York Times and elsewhere that suggest more people are relying on buy now, pay later for essentials like food. This trend has been cited in articles concerning both the U.S. and the U.K.

Consumer debt of all kinds rose by 2% in the second quarter 2022, over the first quarter, coming to $16.15 trillion, according to a consumer credit report by the New York Federal Reserve Bank and Equifax. That total is up $2 trillion from levels at the end of 2019, just before the pandemic recession.

Another indicator: The report found that aggregate credit limits on cards were hiked by $100 billion in the second quarter 2022. The bank said this represents the highest increase in over a decade.

“In part, the growth in each debt type reflects increased borrowing due to higher prices,” New York Fed economists stated in a blog. This includes homes and cars.

“Americans are borrowing more, but a big part of the increased borrowing is attributable to higher prices.”

Adds the N.Y. Fed: “With the supportive policies of the pandemic mostly in the past, there are pockets of borrowers who are beginning to show some distress on their debt.”

As noted, the Financial Health Network’s annual financial pulse research saw the first overall decline in its history. Even some who have enjoyed a degree of insulation from economic events in the past have been hit by inflation, according to the group’s report.

“Declines in financial health were related to expenses outpacing incomes and reductions in savings,” states the FHN report. “A greater share of people said they were spending more than their income, did not have sufficient short-term savings, and did not feel confident in their long-term savings.”

Looking ahead, while FHN’s research found no increase in people not being able to pay mortgages or rent, the report says that this could change “if inflation continues to outpace wage growth and people use up their short-term savings to pay for their increasing expenses.”

Survey data was compiled in April and May 2022, which suggests, given more recent developments, that consumers’ financial state may be eroding further. FHN’s measures of financial health rely on eight factors: spending less than income; paying bills on time; having sufficient liquid savings; having enough long-term savings; having manageable levels of debt; maintaining a prime credit score; holding appropriate insurance; and being able to plan ahead financially.

Americans in a Spending Trap:

79% of consumers spend less than or the same as what they earn, a drop of six percentage points from 2021. 70% can pay all their bills on time, a drop of one point.

Income by itself has not been a shield against inflation. However, in general people with lower income levels reported being hurt by inflation more frequently. Leading categories of pain include food, transportation and utilities.

The Impact of Inflation on Consumers at All Income Levels

A wrinkle in the data came from the unusual labor market conditions of much of 2022. People with household incomes of less than $30,000 a year saw increased employment and increased income as a result. That said, the study found that in reality such positive changes were relatively infrequent across the entire income group.

For banks, credit unions and fintechs, these are unfamiliar waters after a long stretch of low rates and inflation. The research suggests several issues to examine.

• Marketing. Even as Americans are coming off a summer of “revenge spending” and “revenge travel,” reality has already been hitting their wallets in 2022 and will hit it harder. Credit card marketers stressed special cashback programs for essentials early on when inflation began rising. As the Fed cranks up rates even further, people will seek out deals that make the most of their spending. Applying some of the credit card marketing efforts to other banking needs might help hold onto customers as people look to maximize their financial relationships.

• Customer counseling. In its most recent research, and earlier work, J.D. Power has been stressing the importance of offering budgeting and debt-management assistance. Many institutions provide this formally or informally, but the company finds that people frequently don’t take advantage of them. In its report the firm suggests that the current state of things “illustrates a golden opportunity for banks to finally get that advice formula right.”

As conditions deteriorate, online and mobile financial tools will either prove themselves or flop, so financial firms offering these need to tweak them and promote their use.

• Consumer credit. As the Financial Health Network data illustrates, many people are already borrowing for things that a generation or two ago couldn’t be charged. Buy now, pay later isn’t completely on institutions’ credit radar, as much of it still lays outside of the credit reporting industry. Understand how much your customers are using credit that may be “off the grid” will be essential to avoid surprises.

Online unsecured personal loans have already been promoted in recent years for debt consolidation — even as a “financial health tool” — especially by lenders who were historically fintechs. It’s an area for banks and credit unions to consider, carefully.

• Deposit gathering. Traditional institutions grew used to a low-interest-rate environment where typical consumer banking inertia was compounded by little push for deposits other than by fintechs and direct, online-only banks. With the days of coffers full of stimulus payments and pandemic savings being gone, consumers will expect better deals for funds they can scrape together after inflation. With savings being emptied to keep up with inflation, institutions will have to balance creation of attractive savings options and better rates with the reality that in some cases the funds won’t be there to be saved.

Traditional players could consider an idea that some neobanks and newer players have tried: Curating listings of side hustles to help customers bring in more money. If and when a recession hits, more people will be looking for such work.