Subscribe Now Get The Financial Brand's FREE Email Newsletter
On the surface, the purchase of WhatsApp by Facebook for $19 billion seems to have little to do with retail banking. Digging deeper, however, the transaction illustrates the most important consumer trends today that bankers must understand or risk becoming irrelevant in the future. Interestingly, these trends were also important to the sale of Simple to BBVA a day later.

Is WhatsApp worth $19 billion? By traditional financial metrics, the consensus is no. But Facebook is justifying the price by citing WhatsApp’s startling growth, which has been even faster than Facebook’s early years.

In discussions with analysts, David Ebersman, Facebook’s chief financial officer, compared WhatsApp to companies with the potential to grow to 1 billion users. “The primary thing we focused on was how healthy this network is and the pace at which it was growing,” he said. “We looked at other networks that have achieved this kind of scale and that helped provide a framework”, Mr. Ebersman said. More than just raw growth, WhatsApp has grown in the key demographic that many believe Facebook has been losing as of late…the Millennials.

So, what lessons can retail bankers learn from WhatsApp…especially when our industry is surrounded by traditional thinkers and legacy systems?

The Shift to Mobile is Seismic

The shift to mobile is unprecedented, with combined smartphone and tablet usage rapidly overtaking the desktop. This mobile trend is driven by increased application-based actions (e.g., communicating on social networks, posting photos, tweeting) and task-oriented web usage (e.g., location-based searches). While Facebook was built for the desktop and migrated to mobile, WhatsApp was built for mobile first, giving the network an advantage in today’s marketplace.

This shift presents strategic challenges to banks that also until now have built mobile banking apps starting with the desktop experience. As more users are accessing their banking relationship from mobile devices, it makes more sense to begin development with the form and function of mobile. By doing so, the design and flow of the mobile banking application improves as the user-experience becomes more narrowly defined.

In todays mobile-first ecosystem, we should be developing downloadable mobile banking apps. When we do so, we enable the customer to access their address book, bypassing the need to enter information to make payments, etc. We also can allow access to mobile photo libraries instead of uploading photos from different websites. Finally, the app can more easily push alert notifications directly instead of relying on emails or requiring the customer to check a website.

Going forward, it is much better to scale the mobile experience to the desktop as has been done by Moven, GoBank and Simple. By doing so, instead of removing online banking functionality for mobile (or developing a separate but parallel mobile site), additional elements can be added if needed to supplement and enhance the user experience on the desktop/tablet.

For WhatsApp, the size of their user base was impressive (450 million), but the level of engagement (72 percent active on a given day) was what made the deal happen. As shown below, users of WhatsApp did far more than just communicate via text. They shared videos, voice messages and photos…lots of photos. 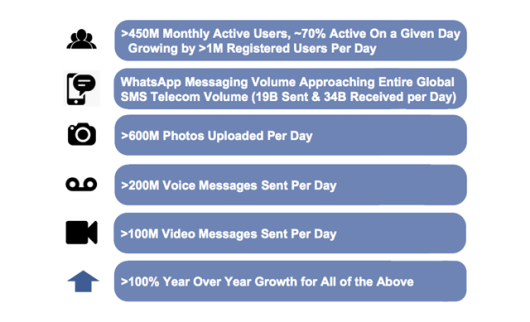 Nothing tells a story or connects people more than visual engagement. Much like Facebook, Instagram and Snapchat, the primary engagement mechanism for WhatsApp is photos. Processing 600 million images per day, the acquisition of WhatsApp by Facebook cemented their position as the world’s most dominant social network (for now) by ensuring that it “owned” the mobile sharing of photos.

“WhatsApp is the only app we’ve ever seen with higher engagement than Facebook itself,” admitted Zuckerberg in a conference call to journalists after the WhatsApp deal was announced. As in any business (including banking), it wasn’t just users Facebook wanted to acquire, it was engaged users that used the mobile app regularly.

As the mobile downloading of photos and videos continues to escalate, it is important for banks and credit unions to also stimulate engagement by fully leveraging the camera functionality of the smartphone. This has already occurred with mobile deposit capture, photo bill pay, and the use of photos to facilitate the opening and onboarding of new accounts.

Beyond these uses of photos, banks can encourage engagement and social sharing by linking purchases with photos and videos. Simple allows customers to attach photos to transactions much like customers used to complete the memo line on a check. By doing so, Simple make spending data more dynamic, more organized and easier to share. 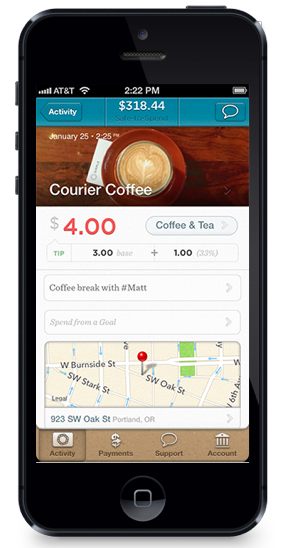 Progressive banks and credit unions are also using videos to guide customers on how to better optimize their relationships resulting in expanded share of wallet. When built for the mobile device, and linked to other forms of communication like email, video increases the effectiveness of communication.

WhatsApp differs from many other social media apps because of the focus on one-to-one or very small group communication as opposed to sharing information more widely. The application connects with those MIPs (most important people) in the user’s mobile address book. Being developed mobile-first, it does not ask the user to spend time building a new graph of relationships; instead, it taps the ones that are already on the device.

Similarly, banks need to understand the desire for customers to use their devices to transact seamlessly with those who are closest to them. While not wanting to share their financial dealings through vast networks, customers want to easily execute P2P payments and even collect money using their mobile device. The recent introduction of Square Cash Request and Payment functionality is a great example of how engagement can be facilitated between individuals or small groups. 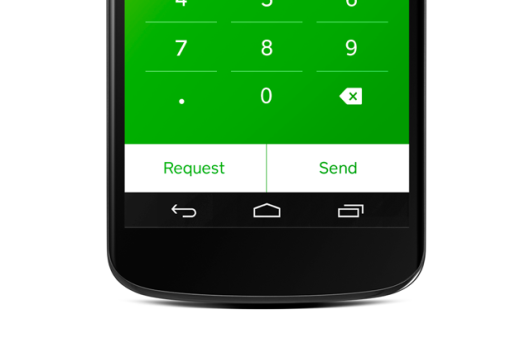 Simple also allows customers to instantly move money between accounts of friends and family with no holds, no checks, no fees and no delays. Adding a contacts requires just an email address and phone number. Two-factor authentication during confirmation adds an extra layer of security without slowing down the process. Simple even allows for shared financial goals and provides a way for friends and co-workers to quickly settle up for shared bills (lunch, night out, party, etc.).The key for banks in the future is to provide the capability for customers to connect financially and socially with those people in their MIP circle of friends…without requiring extensive data input.

One of WhatsApp’s keys to success is its simplicity. WhatsApp became the SMS of the future by being lean internally and simple externally. With only 32 engineers, one WhatsApp developer supports 14 million active users, a ratio unheard of in the industry. Despite the low number of employees, WhatsApp still maintains greater than 99.9% uptime (referred to as dial-tone reliability).

The focus of WhatsApp was to be able to add features without making the product more complicated. Instead of responding to every customer request (desktop version, email capability, etc.) they focused on the utility of the app, its simplicity, the quality of the service.

When WhatsApp adds new features, it is only after it is determined that execution will simplify rather bloat the service. For example, the recent push-to-talk voice messaging functionality only takes a single tap to record and send a voice message. To play a message, a phone will automatically switch from speaker-mode to soft volume when its proximity sensor detects that it’s being held near an ear.

For a bank to better understand what a simplified mobile banking app looks like and how it functions, they should look at the beauty of Simple, Moven and GoBank. They mobile-first providers support all of the functionality of the most important banking service (checking/current account) without the complexity and ‘noise’ associated with traditional bank mobile delivery of the same service.

It is this simplification of delivery that is thought to be the reason BBVA not only acquired the customers of Simple, but also wanted the Simple team to remain. It is difficult for traditional bankers to understand how to deliver an exceptionally simple design when surrounded by so much legacy complexity.

Both Facebook and BBVA could have taken a route of building the services they acquired when purchasing WhatsApp and Simple respectively. They could also have immediately absorbed the acquired organizations and placed a Facebook or BBVA logo on the acquisition for worldwide consumption.

Instead, both firms decided it was more prudent to buy the customers and associated talent, but to leave the organizations relatively intact as autonomously functioning units. This allows them to not compromise the attributes that made their acquisitions unique.

This is usually a faster route to success for industries that are in a state of continuous disruption. Benefiting from the learning curve of others, and bringing additional financial and human resources to the table, there is the potential for greater success in the future.

In an interview with the American Banker, Jacob Jegher, senior analyst at Celent said, “I think it’s a really interesting deal. Simple is a disrupter in the industry and BBVA is a highly innovative bank. It sounds like a good match…Simple can’t be replicated overnight.”

According to the American Banker, Jegher believes consumers will care less about the bank behind the interface and more about the experience and receiving stellar service. “Any step like this pushes the industry forward,” says Jegher. “It’s part of building a culture of innovation in the bank.”

In a separate interview with the American Banker, Stessa Cohen, a research director at Gartner, said BBVA’s acquisition of Simple and partnership with SmartyPig is another sign of its customer focus. “It’s not oriented around transactions but around what the consumer wants and needs,” Cohen says. “It’s a whole new customer experience that really puts customers at the center of their own money.”

What may be most telling about the value of WhatsApp to the marketplace is that the company achieved their growth without investing a penny in marketing. Unlike most competitors in the industry, they never spent anything on user acquisition. The company doesn’t even employ a marketing or PR person.

Instead, WhatsApp created a strong connection with consumers by understanding the shift to mobile, the importance of contextual engagement, the dynamics of social and the power of simplicity. By doing so, WhatsApp benefited from word of mouth marketing and social media to grow at an unprecedented rate.

The question is whether the banking industry can learn from these lessons and move away from tradition, developing products and services that reflect the digital transformation of today’s mobile consumer.