Subscribe Now Get The Financial Brand's FREE Email Newsletter
While the majority of banking executives are optimistic about the future, there is a need for speed and agility to meet the expectations of tomorrow's consumer.

Despite numerous challenges over the past decade, including the need to restore trust, reduce costs, defend business against new market entrants, and develop a more responsive digital banking model, the majority of larger bank executives remain optimistic about the future. In fact, many banks have embraced the digital movement and are confident they are making strides to keep pace with emerging fintech competitors.

Unfortunately, according to the 2016 Banking Industry Outlook, published by KPMG, the strides overall are small compared to the movement of the marketplace. Now more than ever, the need for speed is paramount, as new competitors continue to enter the marketplace and the digital expectations of the consumer increase.

“Banks realize they must adopt a truly digital mindset across the entire organization to keep up with consumer expectations,” said Brian Stephens, national leader for KPMG’s U.S. Financial Services practice and the firm’s U.S. Banking and Capital Markets sector. “This means going far beyond digital capabilities on the front-end and instilling a core focus on the customer that permeates every aspect of the organization.”

Key banking trends identified in the study include:

When respondents were asked about the drivers of revenue growth, the majority expected to grow investment services business, with cross-selling and additional fee generation on new services also being important. While there is optimism around the potential for growth, it is important to note that many of the sources of growth are also where fintech firms are becoming more competitive.

According to the KPMG report, “Banks willing to seize the opportunity to become innovators of new products and services by embracing disruptive technologies and transformative forces will be better positioned to reach growth targets.” 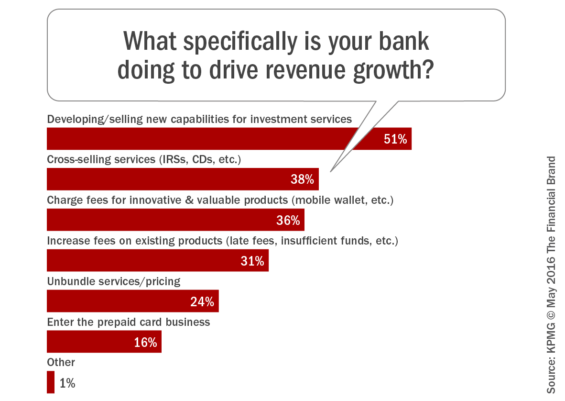 Progress in Becoming a Digital Bank

Are legacy banking organizations overestimating their ability to compete in an increasingly digital marketplace? In the KPMG survey, more than half of the banking executives surveyed feel confident of their digital banking capabilities, with almost three-quarters of executives rating their organizations from 7-10 on a 10 point scale.

As would be expected, the largest financial institutions rated themselves the highest, which is in agreement with the 2016 U.S. Retail Banking Customer Satisfaction Study published by J.D. Power. Interestingly, the smallest organizations surveyed also rated themselves high on the scale, with mid-sized organizations ($50-$250 billion) being the most conservative in their self-assessment.

Despite these strong self-assessments, KPMG (and other organizations such as BAI and Forrester) bring into question whether financial institutions are prepared for a future where the consumer wants significantly more personalized digital experiences. The recent Digital Banking Report entitled, “The Power of Personalization in Banking” highlights the significant gap that already exists between consumer expectations and legacy banking organizations’ capabilities.

Beyond personalization, becoming a ‘Digital Bank’ involves building a brand new business model and new value propositions. Becoming a Digital Banks is much more than a nice veneer with a few new apps. It is a back office and front office transformation that includes new thinking around distribution, systems capabilities and innovation.

The future will be the judge as to whether a lack of fear of the growth of new financial technology start-ups is justified. In the KPMG survey, more than 60% of executives surveyed either did not view fintech firms as a threat or were ‘unsure’ of the threat. As mentioned in the report, this more passive perspective could be partially explained by the recent trend towards investing in, or building partnerships with, new start-ups. To this end, more than 50% of the executives surveyed indicated they had already created a ‘strategic alignment’ or joint venture with a peer-to-peer lender or marketplace lender.

The debate around the need for branches is never-ending. While some financial institutions are definitely scaling back the physical branch presence, others are either updating current facilities and/or expanding their branch networks despite recent research that indicates that branches are no longer the primary determinant of ‘convenience.’

Consistent with the findings of the State of Financial Marketing report, t he KPMG survey found that more than half (58% of executives surveyed planned to increase their branch footprint in the next 12-18 months, with smaller institutions being the most bullish. One of the reasons larger firms were less likely to expand brick-and-mortar presence was because of their heavier commitment to digital channels. 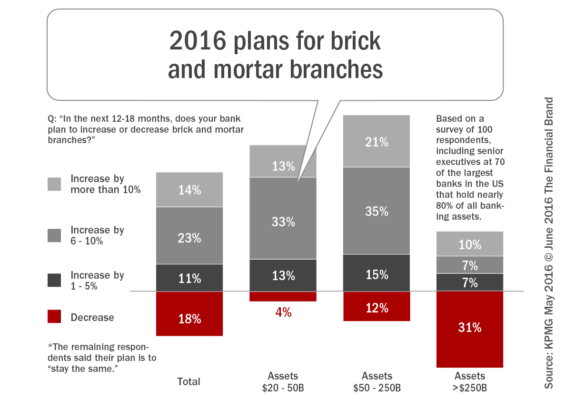 In a deeper dive into branch strategies, KPMG found that digital channels would be integrated into the branch delivery model to improve efficiency, allow for the reallocation of staff for improved selling and to support self service. Mid-sized banks were the most in efforts to integrate digital capabilities within the physical branch. 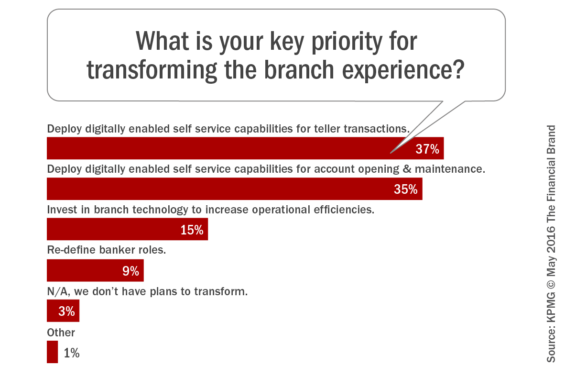 The majority of legacy IT systems date back to the introduction of the ATM more than 30 years ago, with these outdated core systems hindering the ability for institutions to become full-function digital banking organizations. Despite the understanding of the importance of transforming the back office, the cost, time and perceived risk of this transformation leads to either piecemeal solutions or putting core systems upgrades on the back burner for most banking organizations.

This inactivity surrounding core system upgrades is reflected in the KPMG study, with only 39% of respondents reported having begun the process of upgrading, 22% evaluating whether to replace their entire system and another 21% in the planning stages.

The perpetual stalling of legacy core system upgrades is an underlying red herring in the belief that organizations are prepared for the digital future. While some organizations may ‘feel good’ about their current systems or are implementing ‘workaround’ solutions, the digital consumer is increasing their expectations far beyond current capabilities … quickly.

Lack of Commitment to Innovation

While virtually all financial institutions understand the importance of innovation, significantly fewer have fully embraced the requisite change in culture and need for speed. Agility and forward thinking are usually not immediately associated with the banking industry the barriers of fear (38%), unclear benefits (32%) and ‘turf protection’ (30%) still remain hurdles according to KPMG.

“The business case for innovation in banking is clear,” states the research report. “Yet, for many banks, the role of chief innovation officer is still vacant. In today’s marketplace, this is not an optional role.” According to the survey, only 57% of the banks surveyed had a Chief Innovation Officer position.

The Need for Speed

In the quest to stay competitive and meet the needs of a changing marketplace, time is of the essence. New financial technology providers have speed, agility, a newer back office and an innovation culture on their side. And, while the competition is moving quickly, the expectations of the consumer may be moving at an even faster pace.

According to KPMG, “A key to future success will rely on banks’ ability to fully integrate digital capabilities into their business. This means going beyond front-end capabilities and instilling a core focus on the customer that permeates every aspect of the organization.”

While the majority of banking executives may feel comfort today, this may represent the calm before the storm as some very tough structural decision will be required around investment in systems, distribution and new innovative products. Being big and strong may not be enough to win the battle for the customer in the future. Speed and agility count just as much…if not more.