Subscribe Now Get The Financial Brand's FREE Email Newsletter
The ripple effects of the coronavirus economy will be felt for years as people resume their lives. Experts urge banks and credit unions to avoid violent strategic swings until the post-pandemic world solidifies.

The impact of the pandemic will continue reshaping consumers’ attitudes, preferences and practices in using personal financial services for some time yet.

The post-pandemic trends financial institutions can expect to see may be a departure from what was seen during the height of the pandemic, but those shifts may only be temporary as other economic factors mingle with Covid’s effects. In addition, some trends may be distorted by the buoying effect of massive government spending.

The safest prediction is that more shifts will occur over the rest of 2021 and into 2022. The best advice may be to take no predictions too seriously until the changes wrought by the pandemic truly harden.

Do You Bet Red or Black?

A year ago pundits were busy writing malls’ obituary. Now comes the Wall Street Journal headline, “Shoppers Return to Malls, With an Urge to Spend.”

All studies referred to in this article were conducted during 2021.

Optimism Seems to Be Widening Amid Improved Financial Habits

As vaccinations rolled out around the country this allowed more normality, of a sort, to come back, feeding better spirits and having a beneficial impact on people’s mood.

For example, nearly half — 48% — of U.S. consumers polled by Chase and Morning Consult expect their financial condition to improve over the next year. The study reported that optimism is actually slightly higher among Black respondents (54% were optimistic) and among Latinx (49% were optimistic), in spite of the generally higher impact on both groups of the pandemic’s economic effects.

To a degree such optimism is relative. A J.D. Power study found that while 21% of its sample feel financially better off than they did a year ago, 25% feel financially worse off. Four out of five consumers surveyed by Marcus by Goldman Sachs say they will be the same or better off financially six months from now.

The Chase study found that 65% of the overall population believe they are in good financial health. Just over half — 51% — are focused on improving their savings in the wake of the pandemic turndown and 39% have been working on eliminating debt. While 19% of the general population told Chase that they had taken action to improve their credit, 25% of Black and Latinx people surveyed said they’d done so.

When asked what they’d used their federal stimulus payments for, 30% told Chase they’d paid down debt and 36% put it towards savings. And 32% indicate that a primary goal is to develop or maintain a budget.

Budgeting for longer-term matters is seen as a greater challenge. While 83% of the Chase survey sample favor the idea, 76% think they can handle that. And only three out of five feel confident that they can set aside adequate funds for retirement.

Is this merely temporary and is the economy in for a hefty round of “revenge spending,” a term coined to convey the release of pent-up urges to consume?

Some experts think people can’t wait to get out there to spend money for enjoyment and sheer exuberance of it. But research by CivicScience suggests that the pandemic may have caused some rethinking of the role of debt. Credit card spending dropped dramatically early on in the Covid recession and many people either paid off their cards or increased their monthly payments. 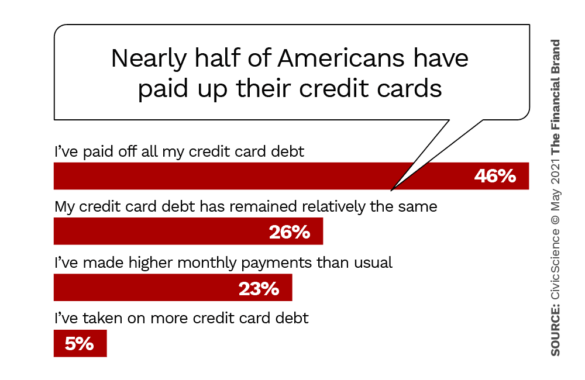 The CivicScience data indicates that consumers continue to worry about holding onto their jobs and about the state of the economy at nearly the same level seen since the second quarter of 2020 — i.e. four out of five Americans worry about jobs and the economy.

It is also risky to put too much faith in generalized numbers, even when they look into specific impacted groups, as Chase’s research did. According to a study by the Pew Research Center about half of U.S. adults who have not retired worry that the economic aftermath of the coronavirus will make it more difficult for them to meet their financial goals over the long-term. More specifically, 44% polled say it may take three years or more just to get back to where they were before the pandemic hit.

This feeds into anxiety over debt felt by about a third of Americans surveyed by Pew. 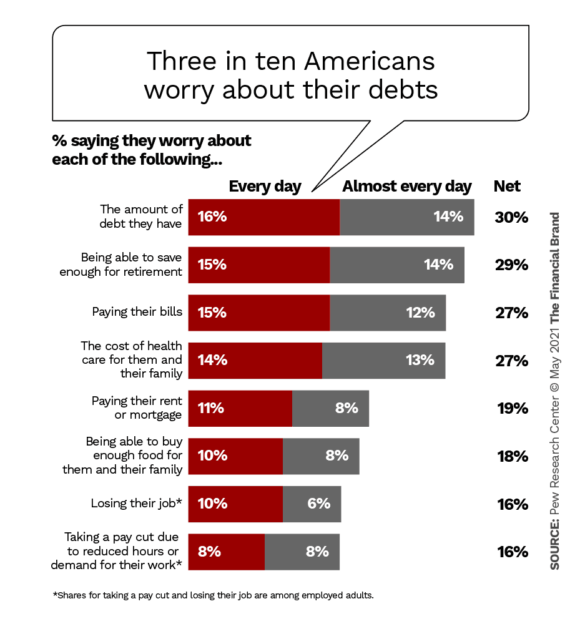 At the same time, the Pew study found that 53% of respondents consider their personal financial health to be good or even excellent. But, “about three-quarters of lower-income adults (75%) and majorities of Black and Hispanic adults and those with a high school diploma or less education say their personal finances are in only fair or poor shape.”

This supports the concept that a multi-tier recovery has been going on, with some groups doing much better than others. Even with Pew and other statistics indicating that some economic groups have been able to maintain savings habit throughout the crisis, it remains to be seen how much of that simply reflected people socking away stimulus checks that they didn’t immediately need.

Can a case be made that stimulus payments tempered what might have been a very ugly mood by now? That remains to be seen, unless still more aid comes.

Covid Changed Attitudes About Digital, But Usage Remains a Blend

Clearly, digital banking channels came to the fore when many consumers could not get to a bank or credit union branch due to personal preference or shutdown. This has driven many observations about the hastening of digital adoption and the likelihood that many people won’t look back, having gone down the digital path. Some have taken this trend as accelerating the end of branches.

The thing of it is, the digital adoption trend is not quite that cut and dried, according to research by CivicScience.

“Surprisingly,” CivicScience wrote in late April 2021, “though banks have shifted more and more resources to their online and mobile platforms (especially during the pandemic), consumers have recently been doing less and less of their banking online.” 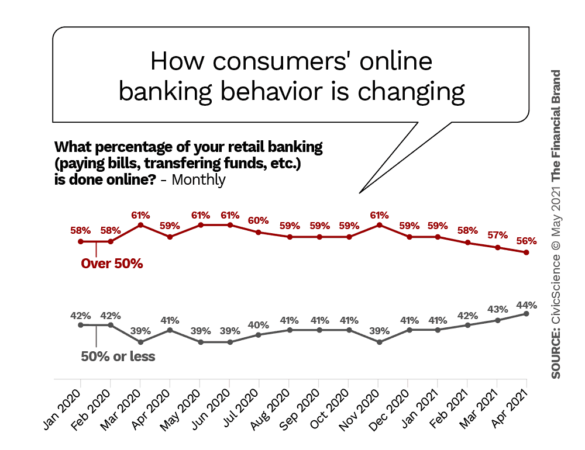 Beginning in November 2020 and into April 2021, Americans began doing less of their retail banking transactions in that channel. Meanwhile, the digital leading edge, mobile banking, has seen usage that has been more erratic, but it had also lessened by April 2021. 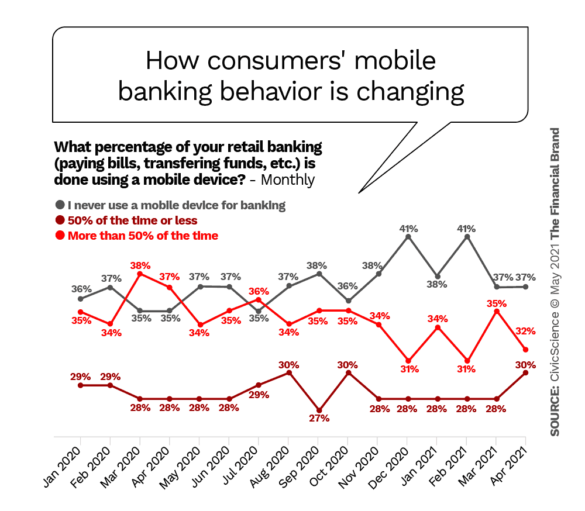 “Perhaps there is a pent-up need for advice regarding financial investments (especially with saved stimulus money) that require in-person meetings to resolve, and people have just been waiting for the pandemic to subside to arrange.”

But the research commentary continued with this: “Unsurprisingly… the more likely people are to shop online for other products or services, the more likely they are to adopt online banking activities, and by significant margins.” CivicScience research found that of consumers who do almost all of their shopping online, 78% do over half of their banking online. Even among consumers who do most of their shopping in stores, 60% did at least some banking online.

The research also found that age has little to do with digital adoption. “It turns out that people 25 and up all hover around the same margins for likelihood to use online banking,” says CivicScience, “while Gen Zers wildly deviate, with nearly half reporting never banking online.” By contrast, the research found that use of mobile banking is strongest among Gen Z, Millennials and Gen X.

But some factors remain sticky and influential.

The research found that across the sample the leading reason for choosing a given financial institution for opening a new account is location of its branches — 26% cited this reason. Only 6% chose the institution because its online and mobile services were the most user-friendly that they’d found.

While Covid increased the appetite for digital access, perhaps less appreciated has been that it has driven other, related consumer preferences.

In researching the digital trend through a global study, Experian found that now that more people are using digital channels, financial institutions must be prepared to ramp up two related functions.

One is security. Consumers’ worries about cybersecurity risks have been a factor for some time, but the massive digital adoption has pushed security to center stage.

The other is customer service. Digital channels are always great until they break, and then people want the assurance of a human being helping them through the difficulty. Experian’s research found that only one in four consumers say they can get help when they need it from a customer service representative while they are online.