Subscribe Now Get The Financial Brand's FREE Email Newsletter
The Fed is set to raise interest rates in 2022 faster than it has in decades. An overhang of excess deposits has many banks and credit unions wondering how to approach the coming year. Analysts say a key to remaining competitive will be aligning rates with relationships.

Bankers knew higher interest rates were on the way, but few expected the extraordinary pace at which they are now expected to rise. Previous rising-rate periods since 2000 have seen relatively modest rate hikes compared to what analysts are predicting now and it could have significant impact on bank and credit union deposit strategies.

March 2022 is when the first of several interest rate hikes from the Federal Reserve is expected to kick in, although the central bank didn’t specify timing in its official announcement. The quarter point increase would be the first increase since 2018.

Most forecasts call for at least four rate increases totaling 125 to 150 basis points over the course of the year. That’s a dramatic shift from earlier expectations, prompted by inflation surging to a level not seen in four decades.

“Clearly, we have entered into the rising rate environment that just a few months ago none of us were predicting for 2022. It’s now about how we navigate that, what do we do about it,” observes Brad Resnick, Director at Curinos.

To help assess the potential implications of these rate increases for banks and credit union deposit rate strategies, Curinos looked back to the last two rising rate cycles, 2004-2007 and 2015-2019. During a webinar on the subject they compared deposit rate sensitivity (beta responses) to those earlier Fed rate increases, and found that while rates rose faster in the 2004-2007 period, there was a more modest and methodical rate increase in the 2015-2019 period.

Historical trends only go so far, however. As Resnick observes, “there are clearly other factors involved this year that were not in play in [the other periods].”

The Wave that Didn't Recede:

The pandemic-driven deposit surge had a much longer duration than anyone expected.

The most notable difference now is the excess deposits in the banking system, observes Adam Stockton, Director of Retail Deposits at Curinos. While bankers expected the initial round of PPP deposits to be gone within six months, that didn’t happen, leaving many banks and credit unions awash in cash, he states. “The stimulus programs and the dramatic expansion of the Fed balance sheet mean that banks are in a substantially different funding position than they have been at any point in the recent past,” Stockton states. 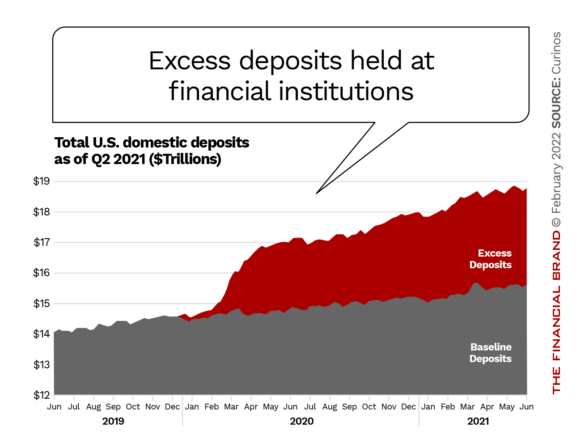 Loan-to-deposit ratios have now dropped from the mid-80s to the mid-60s, leaving many banks and credit unions entering a rising rate environment with little need for deposit growth, Stockton notes. There are other factors at play as well. For example, new market entrants like direct banks and fintechs, and historically low pricing levels may increase the perceived values of modestly higher rates.

Money on the Move:

The net effect is that institutions are likely to see both external and internal deposit pricing pressures. As Stockton explains it, “External pressures from competitors, internal pressures from your customers, and from your sales teams that are pushing for better rates.” At the same time, he adds, Finance and Asset Liability Management are absolutely pushing for no increase in deposit rates. “The question becomes, how do you thread this needle?”

Also making this period unique is the current combination of low unemployment, high inflation, a growing GDP, and near-zero overnight interest rates, notes Neil Stanley, CEO and Founder of The CorePoint, in an interview with The Financial Brand. “This combination hasn’t happened in 30 years,” he says. “You’d have to go back to the ’80s to see that.” 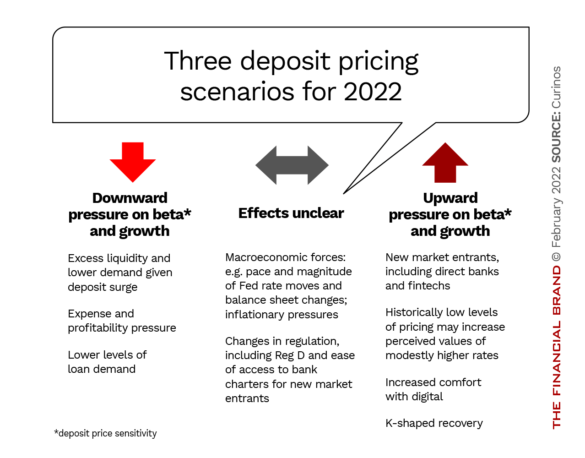 Rate Lag May Not Last Long

The future direction of Covid and inflation will also determine how long banks can hang onto the excess deposits. While consumers were eager to return to spending last year, much of it was curtailed due to the emergence of Delta and Omicron. Should new variants continue to emerge and vaccine efficacy continues to decline, there will be little runoff in the excess deposits, Stockton predicts.

Yet, consumers are likely to spend more if things continually improve, leading to flat retail banking growth. “One of the key questions for bankers to ask is ‘Do we have a plan if our retail deposit growth goes flat to negative’,” says Stockton. “Having a plan ahead of time will be key.”

Since most financial institutions in the market have excess liquidity and don’t need deposit growth, analysts expect rates to lag even as the Fed funds rate increases.

At the Starting Gate:

Rate competition is likely to return by the end of 2022 and accelerate into 2023. Direct banks are expected to be first to move.

While preparing for a lag is prudent, “a zero beta is also not realistic” with the current projected pace, Stockton maintains. There are already some signs of rate movement, he states. Direct banks have moved from 40 to 50 basis points in one-year CD rates and more notably in three to five-year CD rates, the analyst notes. “It’s not something to worry about tomorrow, but it’s a sign that these banks are anticipating rate increases. They are looking at the yield curve to see where they can pick up deposits at profitable spreads.”

Even if the industry doesn’t need the deposits, competition is likely to rise, says Stanley. He agrees direct banks will be some of the fastest-moving competitors because they didn’t experience the surge in deposit growth that traditional banks did.

Also, many traditional banks have moved all of their money into non-maturing deposits with little contractual amenities, meaning that competitive rates at direct banks could quickly siphon away these funds. While consumers weren’t willing to shift banks for an extra 0.2% over the past few years, Stanley says things could soon change as rates exceed 1%.

“What we’re going to see is deposits diminish at a faster rate as interest rates rise. Some bankers will lag, but some will compete,” says Stanley.

If liquidity won’t be a prime issue in the rising rate environment of 2022, relationships will be, Brad Resnick predicts. Banks and credit unions will have to design their strategies and price products to retain their customers and align with primary relationships. Curinos also recommends institutions leverage benchmarking, look to multi-scenario planning, and increase their marketing communications. 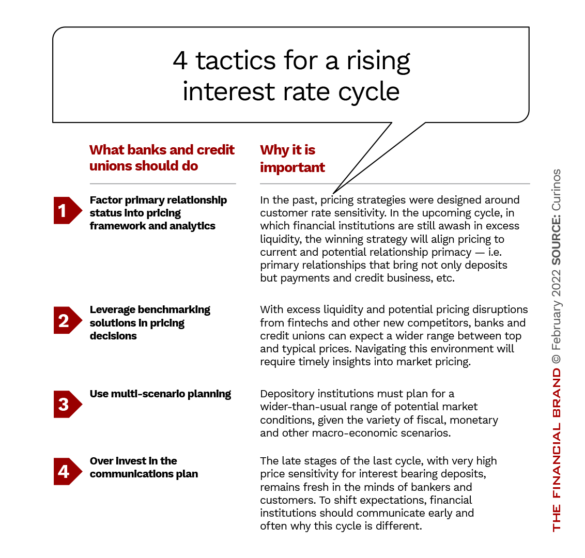 “My hope is that we see rates as a new development opportunity that is stabilizing credit, rather than destabilizing it,” says Stanley. “There’s an opportunity for rising rates to energize bankers,” he says, both in terms of what they can contribute to lending and how they look at the dynamics of funding.