With most of the world’s economies showing clear signs of being in the late phase of the economic cycle, many traditional financial institutions are facing a critical juncture. Whether a recession or a prolonged stagnant period is in the cards, banks and credit unions can anticipate pressure on earnings and increasing risk due to continued pressure on margins and decreasing loan demand.

Even under current conditions nearly three in five (60%) of financial institutions worldwide studied by McKinsey generate returns below their cost of equity. Further, more than a third (35%) are considered “challenged,” according to McKinsey’s analysis. Not by the usual reason of poor credit quality, but by their weak competitive situation shaped by geography, scale, differentiation and business model.

What makes this scenario different from past economic cycles is that the normal pressures of a downturn are being compounded by the increasing threat posed by nonbank competition, both from fintech firms and big technology companies.

These new entrants are powering off consumers’ willingness to conduct financial transactions digitally. Online banking has grown on average by 13 percentage points over the past five years worldwide, with online banking usage in North America approaching 80%, and showing no signs of stopping there.

Taken together, all this calls for urgent action, states McKinsey. For leading institutions action is required to protect and amplify returns. For the many underperformers, however, the need is more fundamental. They must gain scale and reshape traditional bank operating models, the consulting firm maintains or slip into irrelevance.

Here is how the consulting firm describes each category:

1. Market leaders. Comprising just 20% of the financial institutions globally, these banks create almost 100% of the economic value added by the entire industry. Most are large-scale and operate in the U.S., China and the Middle East. Their priority is to grow their advantage. However, this outcome is far from assured.

“History shows us that approximately 43% of current market leaders will cease to be at the top come the next cycle,” the report states.

2. Resilients. 25% of banking companies worldwide. These institutions are almost all strong institutions but situated in challenging markets. Most operate in Western Europe and developed Asian markets like Japan.

3. Followers. About 20% of all financial institutions. Primarily mid-sized institutions in favorable markets that underperform primarily in terms of revenue yields. They have not achieved scale and are at risk from a downturn. These institutions are primarily based in North America and emerging Asia (China, India).

4. Challenged banks. About 35% of banking providers globally are both sub-scale and operate in unfavorable markets, McKinsey states. To survive a downturn, merging may be the only option if reinvention is not feasible. These institutions are predominantly located in Western Europe and emerging Asia. 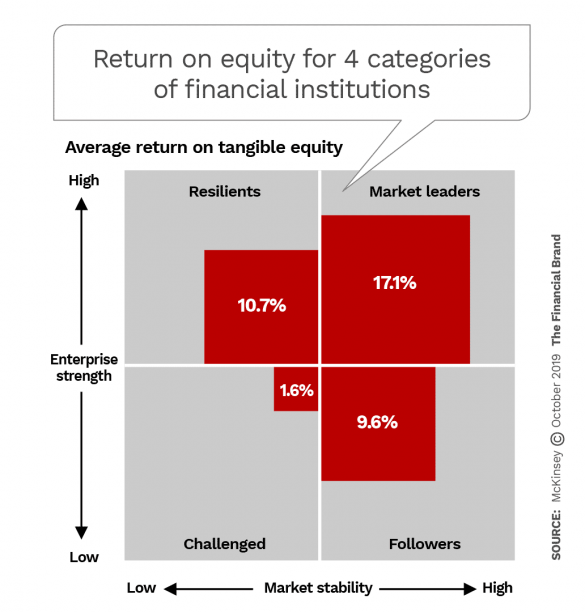 About 15% of the financial institutions that are not creating value are based in the U.S., a McKinsey analyst tells The Financial Brand. “However, we would categorize most of these institutions as ‘followers’ rather than ‘challenged,’ as they have enjoyed favorable market conditions in this cycle.” The average return on total equity (ROTE) of this group in the U.S. is around 6%, the analyst states, as compared to 1.5% in the challenged category.

No One Size Institution Has a Lock on Success

Although most of the market leaders are large institutions, the report points out that 17% of the smallest banks outperform the average ROTE of the largest banks overall. These outperformers tend to be of three types: 1. Community banks with strong ties to their region and tailored, localized services; 2. Specialty banks focusing on niche products and services; and 3. Private banks.

The main reason for the success of the incumbents of any size, according to McKinsey, is this: They have the foresight and willingness to act boldly before it’s too late.

Conversely, the reason for the poor results of many financial institutions is their inability to acknowledge a trend, or to overcome what the consulting firm describes as the “sluggish or nonexistent response” of many institutions even when they see the trends.

The report’s call for urgent action is not only about the financial institutions in the “challenged” category, however. Institutions in each of the four groups face competitive threats.

The biggest challenge for traditional banking providers is to allocate the capital needed to overhaul legacy operating models to compete with nimble and well-funded digital innovators, the report states. “While fintechs devote more than 70% of their budget to launching and scaling up innovative solutions, banks end up spending just 35% of their budget on innovation with the rest spent on legacy architecture,” McKinsey observes.

“The biggest challenge for traditional banking providers is to allocate the capital needed to overhaul legacy operating models to compete with nimble and well-funded digital innovators.”
— McKinsey

Although in some markets the “attackers” are still in the early stages, in developed countries — notably the U.S. — large technology platform companies have made significant forays into the financial services market. Amazon’s venture into small-business lending is one example and Apple’s successful launch of Apple Card integrated into its Apple Pay digital wallet is another.

In many cases the new entrants are going after the highest ROTE segments of banking, the report states, representing approximately 46% of the banking revenue pool in developed markets. 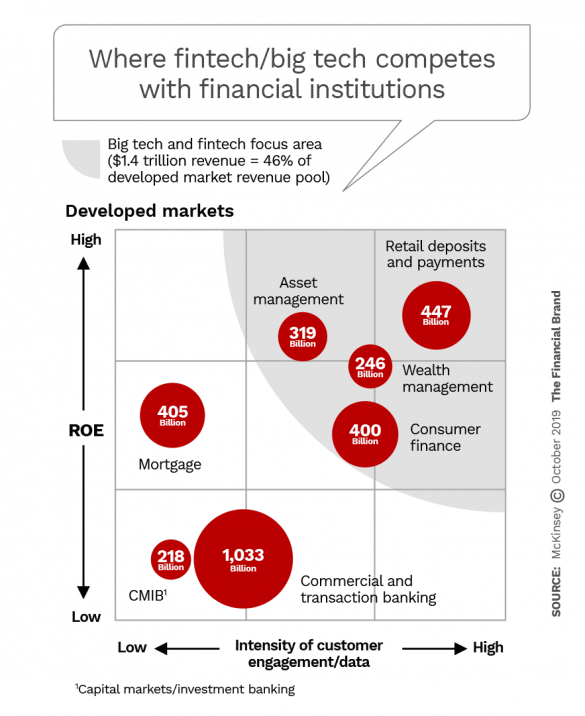 “This will put additional downward pressure on banking ROTEs and cash generation at a time when cash is needed most,” McKinsey observes. Further, as advanced analytics and artificial intelligence continue to improve, digitization of paper-intensive businesses such as mortgages, capital markets, and commercial and transaction banking will increase. Payments is one of the primary battlefields currently.

Regulators worldwide are contributing to the disruption of traditional banking, the report points out. Financial institutions in ten countries are already dealing with open banking regulations that in some fashion require banks and credit unions to grant third parties access to customer financial data, when the customer agrees to it.

This trend has wide implications for banking. “In the U.K., where open banking is being rapidly rolled out, the number of new entrants in the market has increased by 65% in the past year alone,” the report notes.

In the U.S., consumers rather than regulators may drive open banking. In a consumer survey, McKinsey found that “most respondents trust big tech companies to handle their financial needs, including Amazon (65%) and Google (58%).” Consumers have also embraced many nonbank financial alternatives ranging from PayPal and Venmo to SoFi and Chime.

Recommendations to Remain Relevant and Profitable

McKinsey suggests three broad “organic levers” banks and credit unions should pull to improve performance over the next two to three years, as well as two “inorganic levers.”

The organic levers are “Reducing Cost,” Building Resilience” and “Increase Revenue,” and the 58-page report goes into detail on all of them.

For “Reducing Cost,” the two primary recommendations were:

For “Building Resilience,” the recommendation in brief is to use the latest analytics software to manage increased risk.

The “Increase revenue” lever incorporates both customer experience and ecosystems.

Improve CX. Customer experience is always a moving target, but McKinsey points out that late in an economic cycle, as people face increasing financial challenges, they tend to shop around more, bringing CX into play even more. Focusing on improvements there can bring quick results.

“The redesign of select [customer] journeys can produce results (including increased revenue and lower rates of churn) within 12 to 18 months,” the firm maintains, “making CX an attractive lever as banks head into the late cycle.”

With finite resources, however, banks and credit unions need to make sure they are prioritizing the right CX projects. The reports suggests mortgage finance as one area to target. 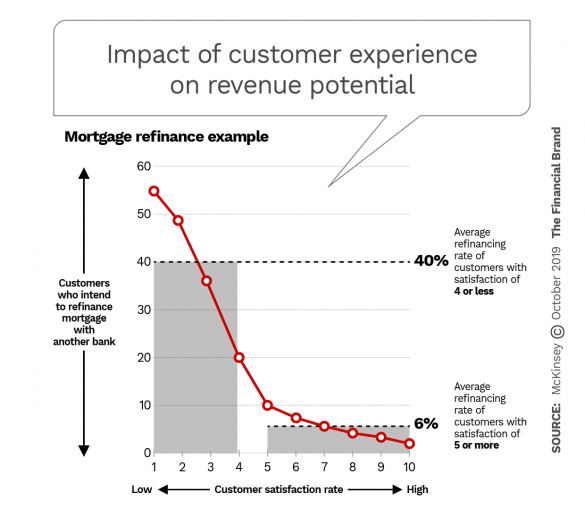 Ecosystem potential. The report goes into considerable detail about the revenue possibilities of banks and credit unions embracing ecosystems — essentially a broader sphere of operations than traditional banking.

Two ecosystem models are highlighted: 1. Orchestrators of existing platforms and 2. Ecosystem participants that access other platforms to “quickly extend their revenue footprint without significant investments.” The report explains further:

Orchestrators can monetize their platforms by bundling low- and high-frequency products and services and by cross-selling through partners’ channels among other things.

Ecosystem participants can both acquire new customers and build value by manufacturing key products and services such as payments and credit services for distribution through existing platforms either under their own brand or through a white-labeling opportunity.

The two inorganic recommendations — mergers and partnerships — are primarily about achieving scale. The reality for many banks and credit unions may be that the kind of bold changes needed to keep the institution competitive can not be accomplished quickly enough, says McKinsey. The current environment is fertile for the pursuit of both mergers and partnerships, the report notes.

Take a Measurable Approach to Innovation

To maintain and build competitive advantage, it’s vital for financial institutions to unleash innovation, says McKinsey. While the report did not delve into specific innovation ideas, it stressed the importance of a portfolio approach to managing an institution’s innovation initiatives. The first step is for top executives to set goals for the return on innovation, define metrics to measure progress, and set time frames for achieving these goals. 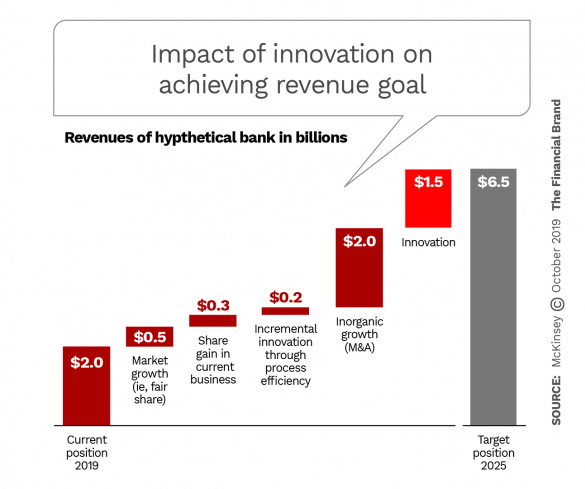 By managing innovation initiatives as a portfolio, and prioritizing them, executives can move quickly to double-down on initiatives that are succeeding and kill those that are struggling.

Priorities for Each Category

McKinsey concluded its report by outlining specific actions for the four categories of financial institutions. Here are some of the main points:

Recommendations for market leaders: Focus on increasing share of wallet among current customers using enhanced CX and extending your value proposition beyond traditional banking products through an ecosystem move. Use M&A to supplement your markets or expertise.

Recommendations for followers: Look for ways to grow scale and revenue. Organically, this is best achieved by building a high standard of CX and improving the institution’s innovation capabilities. Explore strategic partnerships as well as adding new banking and non-banking products as a platform. ZBB could be highly effective for followers.

Recommendations for challenged institutions: Banks in this group need to radically rethink their business models. “If they are to survive, they need to gain scale quickly within the markets they serve,” McKinsey states. Merging would be the shortest path towards that goal.