Three big findings jump out from a new survey of U.S. banking customers:

Loyalty: The shift in brand loyalty between younger bank customers (under 45) and those 45 and above is becoming much more sharply differentiated. This is leading to significant differences about which banking providers they would consider switching to.

Priorities: What consumers value in a bank or credit union differs markedly from the value proposition that community financial institutions in particular have long believed are important.

Engagement: There is a substantial variation in how consumers view their financial institution, based on whether they are heavily engaged with the institution or have a limited relationship. In other words, primary financial institution (PFI) status matters a great deal but is becoming harder to attain as people have more choices.

“Our data indicates you’ve got to think differently about how you attract the member or customer of tomorrow,” says Chris Leone, CEO of WebStrategies Inc., the Richmond, Va.-based digital marketing agency that conducted the survey. For many community financial institutions the demographics of their current and future customer base are shifting and, as a result, customer behaviors are changing, Leone states.

“If you’re of the mindset that ‘Such and such has worked for us for 20 years,’ that’s becoming less true,” says Leone. More significantly, these changes mean that loan growth — and institution growth — will stagnate. The reason why, he explains in an interview with The Financial Brand, is that consumers under 45 are much more likely to consider nontraditional sources for loans — including online-only banks, fintechs and payment companies — than are people over 45.

“ The mental model we have of people thinking ‘I need a car, I go to a bank or a credit union, I get a loan,’ is broken. There are many more choices now and people are willing to give them a look.”

Age groups behave differently in how they begin their search for a new loan, according to WebStrategies. Those 45 and older display much more loyal behavior compared to those under 45 as shown in the chart below. In addition, consumers under 45 are nearly as likely to apply for a loan on a mobile app (27%) as in a branch (31%), whereas older consumers still favor in-person (52%). 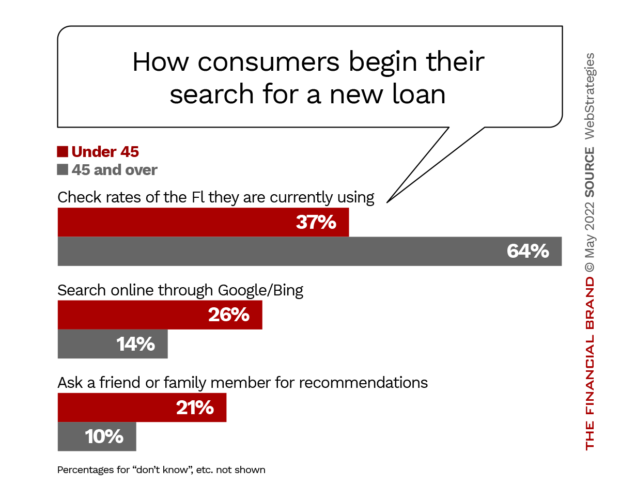 Bank and credit union CEOs need to pay close attention to this trend, warns Leone, because at some point, they will look at the monthly loan sales report and say, “We have as many members as we did ten years ago. Why aren’t we getting as many loan applications?” That will happen as more of your members and customers come to be under 45 and not as likely to come to you first, Leone points out. There are some ways to minimize that, which are covered further on.

Rising Awareness (And Use) of Fintechs

WebStrategies conducted a survey of 1,000 U.S. consumers at the beginning of 2022. The respondents are split evenly between credit union customers and customers of other financial institutions.

The 36-page Consumer Banking Preferences & Behavior Report is written for credit union executives and marketers, which is WebStrategies’ primary market, but Leone believes the findings are relevant to community banks and even to digital-only banks and fintechs. (The report contains a link to the raw data for those who want to work the numbers in different ways.)

The research asked three broad questions that graphically demonstrate the scope of the challenge for traditional institutions: Use of online only banks, use of online investment platforms, and holdings of cryptocurrencies in some form.

Regarding the first, more than two thirds (69%) of respondents under 45 already use online-only banking in some way. Even the over-45 set is getting into the act with 37% saying they have used online-line only banking.

Even for consumers who have a PFI relationship with a credit union, 54% of those under 45, and 20% of those over 45 also use online-only banks.

In addition, just over half (53%) of those under 45 say they make use of an online investment platform. In addition, 38% of this group currently holds cryptocurrency, with another 17% saying they plan to.

Given those results, it’s not surprising that awareness of various types of fintech providers is fairly high, and is fairly consistent across the age divide used in the survey. 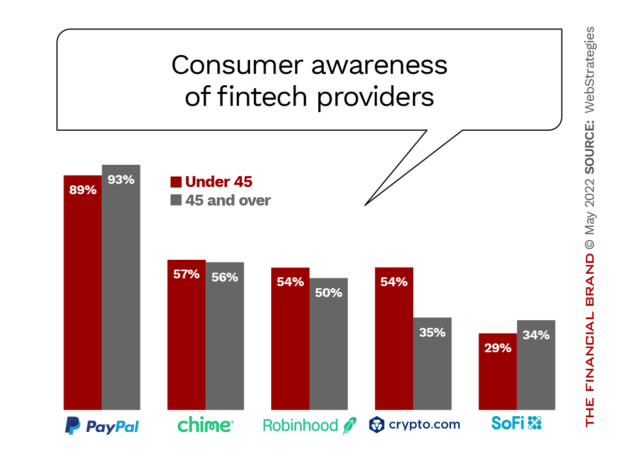 Too often, marketing decisions are based on long-held beliefs, or on the findings of surveys limited to existing customers. WebStrategies sought to confirm whether what consumers value in a financial institution aligns with the typical assumptions of many community financial institutions.

One of the most notable findings was that consumers — of all ages — put the lowest value on some things that community banks and especially credit unions often emphasize in their marketing: local community involvement and financial education. 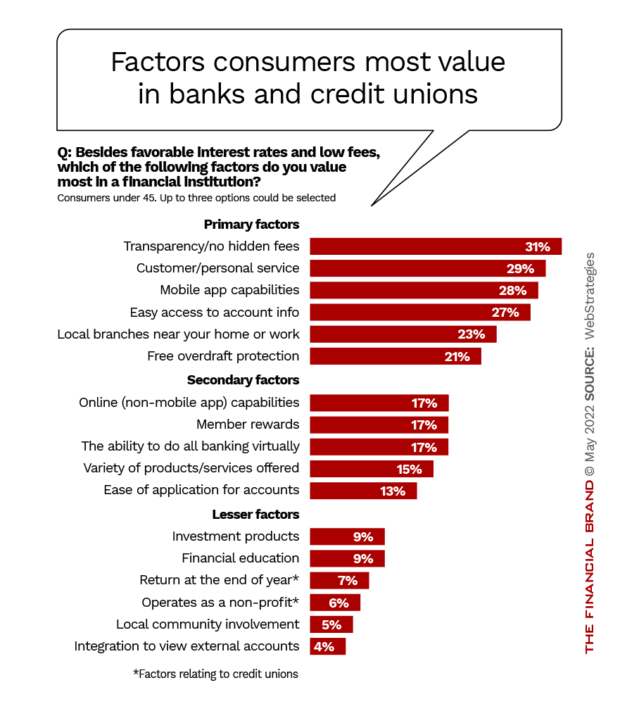 The chart above is for the under 45 portion of the sample, but when WebStrategies ran the figures for all respondents at the request of The Financial Brand, there were no significant differences in the “Lesser” or “Secondary” factors.” Among the “Primary Factors,” the most significant difference was that “local branches” rose in importance from 23% to 36% when older consumers’ responses were added in.

Credit unions and community banks frequently talk about community involvement, but the data shows that it's not a big value driver for consumers under 45.

Also of interest is that the highest-ranked factors are a mix of the traditional — branch locations and personal service — and the new — mobile app capabilities and free overdraft protection.

Leone’s take is that as banking and commerce has digitized to a great degree, user experience and eliminating friction in processes have become much more important.

“To make a generalization,” he states, “I think credit unions have not paid nearly as much attention to some of the fundamentals of user experience and have maybe over-focused on some areas that traditionally served them well, but just don’t resonate as much in 2022.” Again, his point could apply to many community banks and even regional banks in some cases.

WebStrategies’ research confirmed the trend toward “fragmentation” of consumer banking activity, with nearly seven in ten consumers under 45 using online-only banking services, as noted above. Many of those consumers also maintain accounts with traditional institutions.

The digital agency also explored the issue of prospective switching, asking respondents which type of financial provider they would consider switching their primary checking or savings account to.

As shown in the chart below, those 45 and over were much more likely to switch their primary account to another bank or credit union with a physical location. Very few of them would go with PayPal, Robinhood, Google or other similar payment or big tech companies.

However, such non-traditional providers received much higher consideration from those under 45 years of age. While these companies don’t yet offer primary checking accounts, several have reached far into banking in other ways. 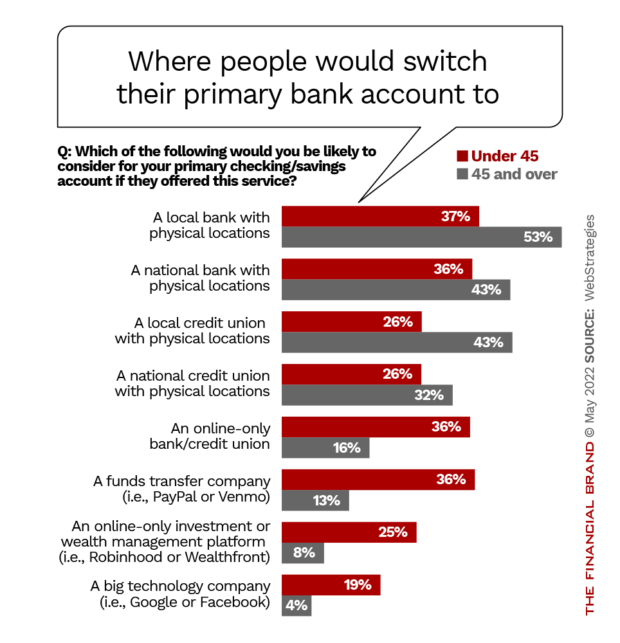 As Leone observes, traditional institutions can’t think of their competitors as only the ones they’ve known in the past. Many of the nonbank companies already have huge brand recognition, and they’ve got so much data. He points out that if they do decide to “turn on the banking switch,” many younger consumers say they’ll give them a try. They have already done so with digital payment products like Venmo and Apple Pay.

PFI Status May Be the Way Forward

The WebStrategies report has numerous charts showing how strongly consumers feel about the financial institution they currently use is directly proportional to how involved they are with the institution.

This suggests to Leone that although banking is becoming more fragmented, PFI status still matters. The data show it clearly affects consumers’ perceptions of not only the institution they use but others in the same category. It’s going to affect what their first step is when they need a loan, he believes, as well as higher brand loyalty, higher referral rates, and Net Promoter Scores.

“As a CEO, I would look at that and say, ‘We’ve got to have an initiative and a focus around converting loan-only members to PFI members.”