Subscribe Now Get The Financial Brand's FREE Email Newsletter
Consumers like their current financial institution, don't like to switch, and challenger banks are struggling with trust — why should incumbents worry? Because the competitive advantage of traditional institutions could erode quickly. Big tech won't stand still, and consumers, accustomed to digital, may move once pandemic worries ease. It's time for retail banking providers to plot their next moves while they have the advantage.

The coronavirus pandemic has been portrayed as banking’s greatest disruptor of all time, propelling changes in months that would have taken years. Some may question the hyperbole, but few would disagree with the basic point. Less obvious is that COVID-19 has simultaneously acted as a giant pause button.

This is reflected in two key developments, both confirmed by a global consumer study:

So right now, many challengers are challenged and incumbents have the advantage.

But a pause is just that. Change will resume. As the study’s authors — with EPAM Systems and its consulting brand EPAM Continuum — point out, “the biggest changes are yet to come.”

The most serious threat ultimately may come not from challengers that survive, but from the big tech companies and from increasingly dominant megabanks, according to Panos Archondakis, Global Head of Banking and Wealth Management at EPAM Systems.

Probably the single most striking statistic from the EPAM survey of more than 4,500 consumers in the U.S., U.K., Hong Kong and Singapore was that more than four out of five consumers worldwide (82%) are happy with their bank (46% “extremely happy”). Only 4% of respondents are even “slightly unhappy, with a barely perceptible 1% “extremely unhappy.” Further, only 3% of consumers worldwide use a challenger bank as their sole bank and just 5% use one as their primary bank.

Before traditional institution executives start high-fiving each other, this picture isn’t quite as lopsided as it may seem. For one thing, nearly two thirds (63%) of those polled gave trust as the main reason for deciding where to place their primary account. Given that the survey was conducted in June and July 2020, during a global pandemic and its massive economic impact, it’s not surprising that trust is such a big factor.

But storms pass eventually, and it’s equally noteworthy that exactly half of respondents are reassessing their banking needs in response to coronavirus. As the EPAM survey report notes, “The pandemic has impacted attitudes but not behaviors — yet.” 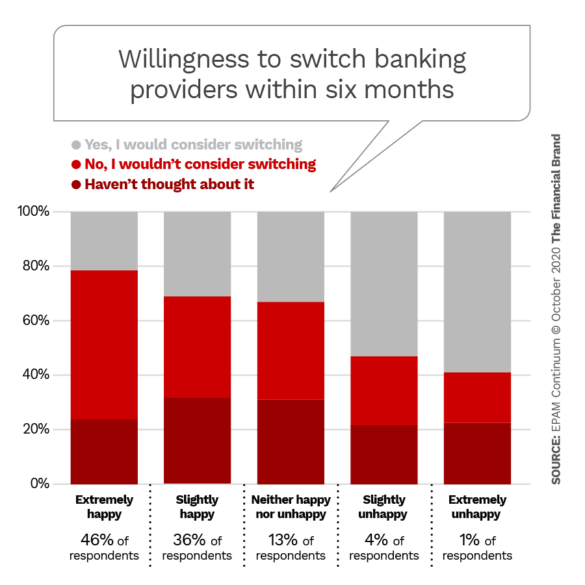 Trust Works in Favor of Incumbents

In an interview with The Financial Brand, Panos Archondakis said the high level of happiness of consumers with their current banking provider surprised him.

Given all the hype about neobanks and the disruption they were causing, he says, “my going-in assumption was that there would be a much stronger take-up of the new contenders and that we would be starting to see some attrition and dissatisfaction with the incumbents. That wasn’t the case.”

As the report team started to look into the reasons why, they teased the trust element out of the data, says Archondakis. “The fact that traditional financial institutions often have a lengthy history, stability and scale is a key factor in that trust,” he believes. “In times like we’re in now, that is a powerful message.”

Further, retail financial institutions are offering “pretty much all the services consumers want or need to consume online,” Archondakis observes. In terms of product sets and the ability to initiate and conclude transactions online, at least the larger retail banks are keeping up with the challengers, he adds.

Innovation Is Great, But Switching Is a Hassle

Along with the importance of trust, the survey found an interest in innovation, particularly among younger consumers. Two out of five (40%) Gen Z and Millennial respondents say they are open to innovation in banking services. In addition, a little more than 40% of Millennials are at least somewhat willing to allow social media platforms to have access to their banking accounts, even though that would seem to fly in the face of security and trust. 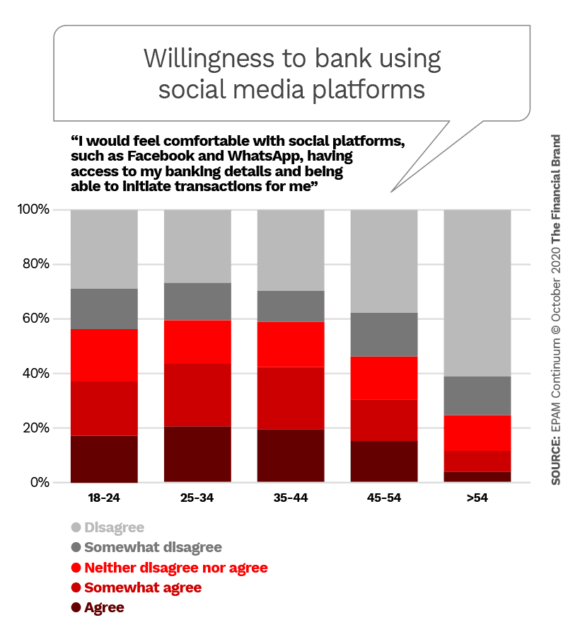 “Our data shows that people aren’t switching banks today, but at the same time they’ve expressed interest in innovation,” says Archondakis. The inference from those facts is that people are not seeing anything better to switch to anywhere else. In other words, says the consultant, they’re getting what they need at the moment. In addition, it remains very difficult for consumers to switch primary institutions.

When consumers were asked, “What would stop you from switching banks?” lack of trust in a new player was a common response (35%), but “the hassle of switching” was the top response (37%).

Think of all the different companies where people have sent their credit card details, enabling the firms to collect funds on a regular basis, Archondakis notes. It’s not just utilities and insurance companies, but a long list of subscription services like Uber, Spotify and Netflix.

The executive believes the right combination of incentives and removing the friction of changing all those services could shift the cost/benefit balance of switching accounts. “Our feedback shows that consumers would actually be happy to move if that were the case,” he states.

The EPAM report paints a gloomy picture for challenger banks overall, while allowing for some individual successes. In general, the products that challenger banks offer are the same as established banks, the report states. “There is little fundamental difference to the average consumer beyond the look and feel of the bank or highly-focused service benefits. The attraction for customers is limited when the key messaging focuses on customer experience alone.”

The pandemic situation with its shift away from in-person banking to digital “should have been prime conditions for digital-only banks,” Archondakis maintains.

“Consumers’ aversion to risk, plus their trust in the incumbents, has prevented the take up of challenger banks we should have seen.”
— Panos Archondakis, EPAM Systems

But consumers’ aversion to risk, plus their trust in the incumbents,” has prevented the take up we should have seen,” he states. The report sums up the challengers’ predicament: “If people are happy and trust the relationship they have with their current bank, what’s the motivation to switch?”

As a result, Archondakis predicts significant attrition in the challenger bank space.

These newcomers might do better by focusing less on the “hard slog” of building a primary-account customer base and concentrating more on product innovation, he suggests. Fintechs such as Klarna and Affirm have demonstrated the success of this approach in the point-of-sale “buy-now-pay-later” lending market, says Archondakis.

Incumbents Have a Window, But How Soon Will It Close?

The rise of fintechs and challenger banks in recent years was a wake-up call for traditional institutions. The response for most has been a fast-follower strategy in the move to digital banking services. Aided by customer inertia and the hassle of switching, this approach has, so far, held off most of the challengers, according to EPAM’s report.

However, the report states bluntly that “trust and the hassle of switching banks should not be seen as reason to rest on laurels, but should be used as an opportunity to drive home their competitive advantage.” Importantly, the firm believes the window of opportunity to do this is small.

Banks and credit union leaders may wonder: Why such urgency when the report finds many challengers struggling?

Because challenger banks are not the real threat. In fact they’re in somewhat the same boat as traditional institutions when it comes to the two biggest competitive threats: big techs and the megabanks — sometimes in combination.

“Big tech and social platforms are not standing still,” Archondakis warns. He points to Google and its banking partners, plus the highly successful partnership between Apple and Goldman Sachs.
LINK: https://thefinancialbrand.com/99569/google-bank-citibank-bmo-harris-bbva-digital-checking-account/?internal-link

“I believe that the big tech and social platforms are really going to close the window of opportunity quickly,” Archondakis states. The techs have enormous resources and they’re very used to moving fast. The consultant isn’t predicting that they will become regulated institutions, but that they will embed financial services in their broader operations through partnerships.

And the megabanks? The fact that most consumers are happy with the bank they’re using basically is confirmation that the megabanks are doing a good job, Archondakis asserts. The fintech revolution pushed the biggest banks to do things they wouldn’t have done naturally.

“They may be conservative and risk averse, but at the same time they have the resources to get in the game quickly,” he states. And now they have.

The Opportunity and Need for ‘Ubiquitous Banking’

With its global banking focus, EPAM’s researchers noted the spectacular success of China’s Ant Financial (part of Alibaba Group) and WeBank (majority owned by Tencent). They are two of the largest financial institutions in the world and did not start out as banks. “Both have one thing in common,” the report states, “their commitment to becoming fully integrated into their customers’ personal digital ecosystems, and, ultimately, to delivering a truly ubiquitous banking experience.”

Though these two giant companies integrate commerce, finance, payments and social media all in one app, Archondakis agrees that this model is unlikely to translate to the U.S. “Western consumers are almost certainly not going to be comfortable with the same level of concentration of data and service in one place as in the [Chinese] model,” he explains. “Look at the pushback when Facebook tried to introduce its own currency, or what’s happened with TikTok.”

Having said that, however, Archondakis points out that consumers welcome ease and convenience, so that if Western companies can find a way to help people avoid having to use multiple apps for commerce, payments and banking in a way “that meets the trust bar,” that could become banking’s sweet spot.

More broadly, EPAM’s report advances the concept of “ubiquitous banking,” as the future of the industry. Archondakis describes it as banking everywhere a client needs it, but transparently. “Banking of itself isn’t a top-of-mind activity for people,” he explains. Rather, they want to buy a car or buy a house that requires financial services.

“Banking in the future could submerge into the experience, the social and the consumer behavior, providing integration at the point of consumption when it’s needed, where it’s needed — instant loans, payments, deposits, bill sharing, crowdfunding,” Archondakis explains. “That’s what we meant by ubiquitous.”