Subscribe Now Get The Financial Brand's FREE Email Newsletter
Digital evangelists say the future of the financial world is about clicks not bricks, but the biggest U.S. bank loves branches. Chase Bank continues building new branch locations, but also rolls out digital products at an accelerated pace in a two-prong strategy to fuel deposit growth.

Fintechs came to prominence by concentrating on single slices of the banking pie. Yet even as more and more of them attempt to broaden their menu to build profits, they remain narrow. None come close to replicating a full-service bank.

During the 2022 JPMorgan Chase Investor Day Jennifer Piepszak, Co-CEO of Consumer and Community Banking, put up a slide listing nearly 40 banking and payments services that many consumers and small businesses consider essential, all available from Chase branches or its online and mobile operations.

“We don’t often step back and look at the aggregate value we deliver,” said Piepszak. “We pay close attention to the competitive threat of fintechs, but no fintech can match the breadth of these solutions or the trust and security we provide.”

Piepszak made this point in the course of explaining why Chase continues to find that offering omnichannel service — both physical branches and multiple digital channels — serves customers and the bank well. The megabank continues to be an outsized counterpoint to the popular “who needs branches?” movement.

“We now have more than 46 million mobile-active customers … up 35% since 2019 and over 50% of them use one or more of our financial health tools,” said Piepszak. “70% of our customers visited a branch in 2021 and 20% met with a banker to discuss their financial needs. And these numbers are consistent, even for younger generations.”

As a result of trends like this, Chase continues to invest in three broad aspects of its consumer and business banking operations: digital technology and product development; distribution, which includes marketing, especially for credit cards; and expanding its branch network.

As described in a joint presentation by Piepszak and Marianne Lake, Co-CEO of Consumer and Community Banking, Chase represents an important blend of tradition and innovation. Granted, investor day presentations inherently strut a bank’s best stuff, but the presentation made a strong case for Chase’s contention that, rather than being seen as substitutes for one another, digital and conventional banking channels should complement each other. In the Chase experience, the role of each is evolving, but both remain necessary to its success.

“Customers are using self-service channels for more of their day-to-day needs across account opening, servicing and money movement transactions,” said Lake. “We strengthened our model by investing in digital channels to provide more services and improve customer experiences.” Lake said this has driven more than a ten percentage point increase in customer satisfaction since 2019. At the same time, the bank has achieved high customer satisfaction in its branches. 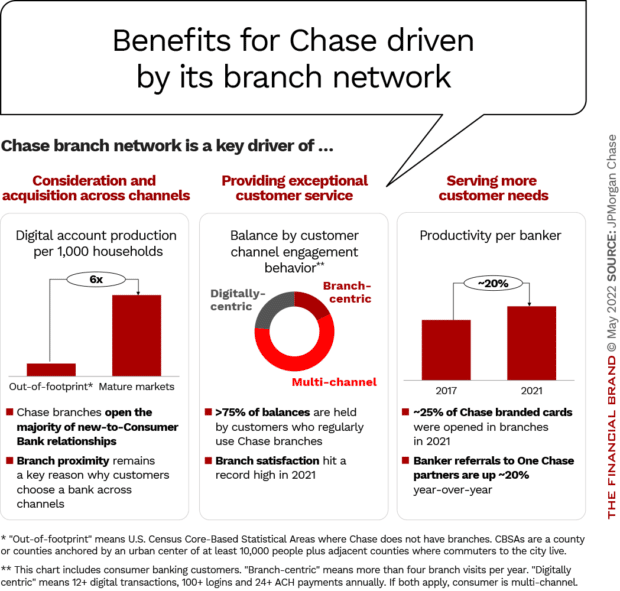 Most customers who are new to Chase begin their relationships in a branch, according to Lake.

The megabank’s continuing belief in the importance of branches hasn’t kept it from adding innovative new consumer banking and payment services that go far beyond branches. During the investor day presentations several new ones were introduced, including a variation on buy now, pay later service based on a debit card, a mass-market wealth building service that will reside inside the Chase mobile app, and an app-centered Chase travel service that will include concierge assistance.

A Deeper Look at the Chase Branching Strategy

Branches “are the storefront for the entire firm,” said Piepszak. “They are what makes us local. We’re only starting to realize the benefits of the investments we’ve already made and will continue to invest for the future and optimize our existing footprint.”

As the maps below demonstrate, in the course of rationalizing its existing network and building out, often in completely new markets, Chase has become the first bank to have branches in all of the lower 48 states. The bank says that it serves 85% of the U.S. population in some way, including branches, digitally and via cards. 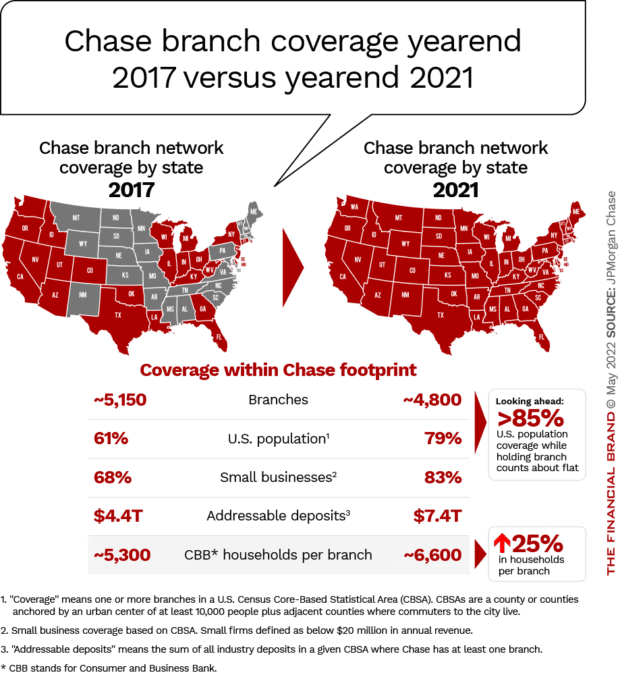 The bank now has approximately 4,800 branches, which, while spread over more territory, actually represents a reduction of branches overall. Approximately 500 new branches have been built since 2017, including about 300 in new markets. Examples of “high opportunity” markets, and the number of branches opened there so far include Boston (31), Philadelphia (44) and Washington, D.C. (41). In mature markets there have been about 850 consolidations since 2017, accounting for the net reduction in branches shown in the chart above.

Piepszak said that “creating omnichannel experiences to meet customers when and where they want” enables Chase to serve more households than other banks’ branches.

Of the new branches, one specialized format is Chase’s “community centers.” These are designed for underserved urban communities. The bank staffs them somewhat differently, including specialists in business mentorship, home lending advice, and community managers trained in outreach. 12 had been opened by yearend 2021 and five were slated to open in 2022.

The bank considers branches key to growing the number of households it serves — up 15% since 2017. Piepszak noted that Millennials and Gen Z consumers account for 45% of the bank’s customer base. During the same period Chase grew business banking client relationships by 37%.

Piepszak credited the investment in the expanded branch system for a major part of the bank’s deposit growth, which hit $1 trillion in the Consumer and Community Banking group in 2021. (Total deposits for the entire company at yearend 2021 were $2.46 trillion and total assets were $3.74 trillion, according to JPMorgan Chase’s annual report.)

Chase considers a branch fully “seasoned” after ten years. Reflecting the network reorganizations and the branch openings, more than 20% of its branches are not yet mature.

“It’s still early days, but we’ve demonstrated we can successfully enter new markets and grow organically,” said Piepszak. “We’re going to continue to invest in new branches and high opportunity markets and are confident we can grow deposit share in line with or better than branch share over time as we have in the mature markets.”

“Jamie [Dimon] talks about getting to 20% deposit share and given the U.S. banking market remains one of the most fragmented in the world, we expect that some bank is going to get there, and we’d bet on us.”

While federal law prohibits a bank from holding more than 10% of national deposits as the result of an acquisition, this limit does not cover organic deposit growth.

Referral business and the building of broader relationships through the branch has been strong and is a big part of what Chase likes about branches when they move away from transaction roles. Nearly nine out of ten new investment customers come from internal referrals and 75% of new small business customers start as consumer customers of Chase. In addition, about half of consumer mortgage originations begin in the bank’s branches.

The bank has brought down branch network costs by shifting more routine business to digital and self-serve channels. From 2017 to 2021 branch expenses fell by 12%. 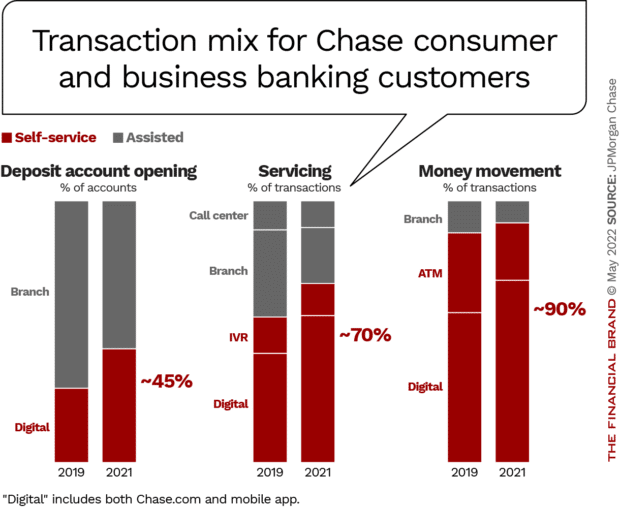 An increasing portion of Chase customers’ banking business has gone digital. Beyond the figures in the chart above, this is seen in other statistics. For example, Chase customers’ use of Zelle for both consumer needs and business needs was up 30% in 2021 over 2019.

One of the new product launches announced during the bank’s investor day is the 2022 debut of a remote advice channel for mass-affluent customers seeking low-cost investment help. One element is one-on-one video and phone-based advice from J.P. Morgan Personal Advisors. A related element consists of digital tools and planning aids via Wealth Plan by J.P. Morgan. Both services will be accessed as part of the bank’s mobile app.

How Payments Fits into the Chase Retail Banking Strategy

Chase ranks as the top consumer payments organization in the U.S., processing over $5 trillion in volume.

Marianne Lake told investors and analysts that Chase is all for digitization of payments, but insists on being “data-led.”

“So, what’s the data telling us?” said Lake. “It’s telling us that new and emerging payment venues still represent less than 5% of all spend, including leading digital wallets and buy now, pay later.” They are growing, but from small bases.

Ironically, she said, both of these “new” payment types use the existing card system for parts of their operation.

“I like our hand as the largest issuer in these venues because as they grow, we grow,” said Lake.

“From a consumer’s perspective, existing payment methods work. They are easy, secure, reliable, and they provide access to funds and credit effectively real-time 24/7. … And that’s the bar that innovation will need to meet.”

Lake noted that Chase leads in credit card “spend and lend.” That’s on the consumer side. On the business side, Chase has been in second position and plans to launch Ink Business Premier, a pay-in-full card packaged to appeal to larger businesses, in part to push for share.

During the pandemic, Chase launched a credit-card based variation on buy now, pay later, called My Chase Plan. At investor day Lake announced that the waiting list had just opened for Chase Pay in 4, which the bank designed to operate from the bank’s debit cards. Customers will be able to designate purchases to be paid for over time, with no interest charge. (At the time of the investor event Chase provided few details about Chase Pay in 4.)

“They’ll be able to turn it on like a light switch,” said Lake, “and it will work anywhere that their debit card works.” Lake added that the bank plans to bring installment payment solutions to all methods of payment that it offers, and that this will all be available through the Chase mobile app.

Some might think that the point of the debit card BNPL is to appeal to younger consumers, who a fair number of research studies have said don’t like credit. Lake called that notion a “popular myth.” 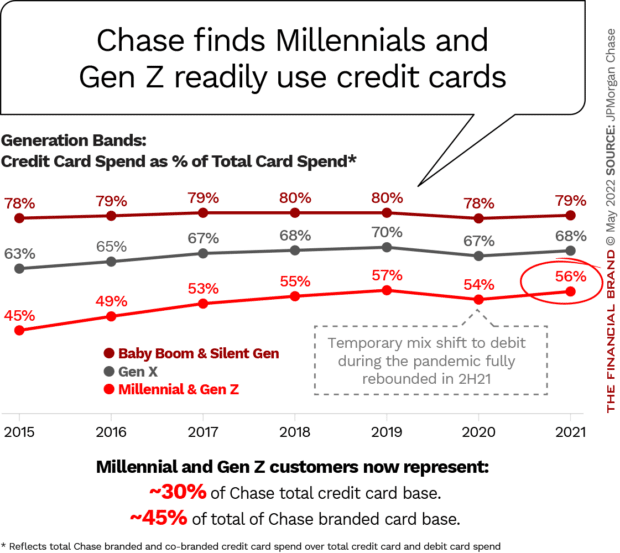 “In our base, nearly 60% of spend by Millennial and Gen Z is on our credit cards and they’re demonstrating a similar evolution of spend and lend behaviors as previous generations, adjusting for age,” said Lake. There had been a shift during the pandemic, but she suggested this was the result of consumers concentrating on buying goods from merchants where debit card use is more common, such as grocery stores.

“So it was a mix issue, not a secular trend,” said Lake. “It does not appear to be true that Millennials and Gen Z prefer debit cards over credit cards.”