Subscribe Now Get The Financial Brand's FREE Email Newsletter
What are banks doing to make people crabby? What are the most common complaints? A pair of new tools from the Consumer Financial Protection Bureau lets anyone with an internet connection dig through big banks' dirty laundry.
Subscribe Now!

The banking industry wasn’t happy after the CFPB started publishing consumer narratives in its online Consumer Complaint Database near the end of June. But then the CFPB rankled banks again when it decided to release a monthly complaint snapshot, including a “Top 10” list naming the worst offenders. Will community institutions leverage this government sanctioned report to mock big banks in their marketing — like Bank of America, Wells Fargo, JPMorgan Chase and Citibank?

For four years now, the CFPB has been running an online service that aggregates complaints on most consumer financial products and services — over 650,000 so far. But starting in June 2015, the CFPB started giving consumers the option to publicly share their narratives; more than half have elected to do so, the CFPB says.

The Consumer Complaint Database provides a searchable, online collection of personal narratives that will allow users to see what problems others might have experienced with providers of financial services. When the database launched, more than 7,700 consumer complaints about banks, mortgage lenders and credit card issuers were made public.

In each public complaint, the consumer’s name and address are redacted, as are all details the CFPB or the consumer considers private. Financial institutions are not permitted to publish their own narratives in response, but instead must use one of several stock responses, such as “Company can’t verify or dispute the facts in the complaint,” or “Company believes it acted appropriately as authorized by contract or law,” or “Company chooses not to provide a public response.”

The banking industry isn’t happy… about any of it.

Frank Keating, president and CEO of the American Bankers Association, says the public disclosure of unverified consumer complaints is reckless and irresponsible.

“We’re disappointed that the bureau has chosen to become an official purveyor of unsubstantiated and potentially false information instead of fostering informed and responsible consumer choice,” Keating said in a statement. “This risks tarnishing the reputation of individual companies without substantiation.”

Keating also thinks the CFPB’s approach is entirely one-sided, saying the system offers no meaningful options for a bank to publically dispute an erroneous complaint.

“Checking a standardized box will not provide valuable information to consumers, and banks will not choose to engage in a public disagreement with their customers,” Keating continued.

Richard Hunt, president of the Consumer Bankers Association, couldn’t agree more. He said he was “profoundly disappointed” with the posting of consumers’ online narratives, and called the CFPB action “simply a public shaming of banks.”

The CFPB has also started publishing monthly reports analyzing complaints in its database. Each report will break down complaint volume according to financial institution, product type and geographic area.

Beyond the aggregated data in each month’s report, the CFPB will drill down and look at one specific product type as well as one specific geographic area. For instance, the inaugural issue focuses on debt collection complaints, and examines what consumers are saying in Milwaukee, Wisconsin.

The consumer loan category is in the middle-of-the-pack with about 1,100 complaints in June. However, the average monthly volume of consumer loan complaints increased 55% over last year. That is, by far, the largest proportional increase of all industry areas.

The report calls specific attention to the financial institutions consumers complained about most between February and April 2015, with Equifax, Experian and BofA topping the CFPB’s inaugural “Top 10” list. In the retail/consumer banking category, Bank of America has generated 47,732 complaints since July 2011, Wells Fargo has 33,214, JPMorgan Chase has 26,969, and Citibank has 20,762.

“Compiling a list of names is unnecessary and irresponsible,” says Samuel Friedman with Sirote & Permutt, a law firm specializing in issues affecting the financial industry. “Unverified, unsubstantiated and unproven complaint data should be taken with a grain of salt.”

The financial companies consumers complained about most between February and April 2015 predictably include the industry’s biggest players. The graph below shows which products consumers complained about for each company. The “Other” category includes consumer loans, student loans, money transfers, payday loans, prepaid cards, and other service complaints. Complaints sent to the top 10 companies account for 46% of all complaints in the CFPB database. 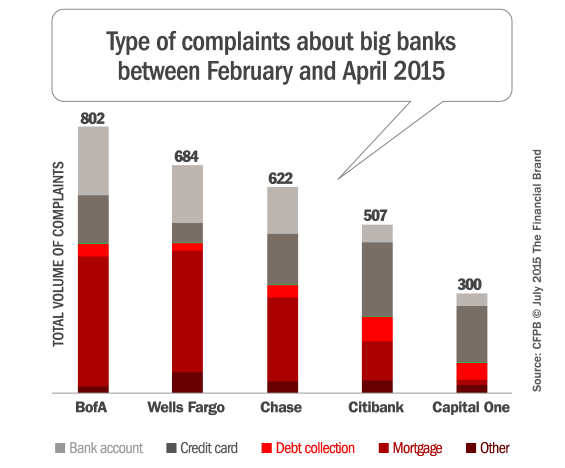 Hawaii, West Virginia and Maine have seen the greatest increases in the volume of complaints. Take a look at the CFPB’s report to see if your financial institution serves any markets where consumers are getting more agitated and cranky, and you might decide to adjust your marketing messages accordingly (e.g., “Tired of getting the shaft from out-of-state big banks?”).