Subscribe Now Get The Financial Brand's FREE Email Newsletter
Cornell law professor Saule Omarova could bring a radically different agenda to the post of Comptroller of the Currency. She could actually unite the interests of commercial banks, investment banks, fintechs, big techs and cryptocurrency interests — because she dislikes them all.

The Biden administration’s nominee for the post of Comptroller of the Currency will literally give national bankers a run for their money.

Omarova disputes the underpinnings of traditional and fintech finance, and can speak quite bluntly about both. She shows a skepticism about innovation when she feels it lacks a point or justification. And, at least on paper, she would have no problem rooting up the whole financial garden and replanting it according to a much different plan.

She appears to hold public institutions on something of a pedestal and regards private financial institutions, especially very large banks, with suspicion.

And she wields references to the financial crisis that led to the Great Recession like a sharp poker, ready to skewer anyone’s argument that wraps itself up in promises for the public good when she suspects they are chiefly about private gain.

Omarova is a banking law geek who holds some essential principles, such as the separation of banking and commerce, as sacrosanct. Dry as that sounds, Omarova, who was born in Kazakhstan, also appears to have a self-deprecating sense of humor.

When interviewed for the MSNBC podcast series “Why Is This Happening?” Omarova was asked by host Chris Hayes about her origins and arrival in the U.S.

Near the end of the Gorbachev era in the U.S.S.R., she recounted, she had been an undergraduate student at Moscow State University. She won a seat in an exchange program with the University of Wisconsin at Madison for a single semester. During that time the Soviet Union collapsed.

“So there I was, a student without anywhere to go back to,” recalls Omarova. “I was very worried about what was going to happen. So I stayed to do my Ph.D. in political science. But frankly, to this day, I feel guilty for having left the country at such a momentous time, because obviously they couldn’t hold it together without me.”

A bit of dry wit will help Omarova with the challenges at the Office of the Comptroller of the Currency, as she enters the approval process in the Senate with a trail of work that will manage to not make her popular with many in banking. In a member newsletter announcing the late September 2021 nomination, the Bank Policy Institute stated that Omarova “has expressed views on the financial system that set her up for a rocky confirmation process in the closely divided Senate.” 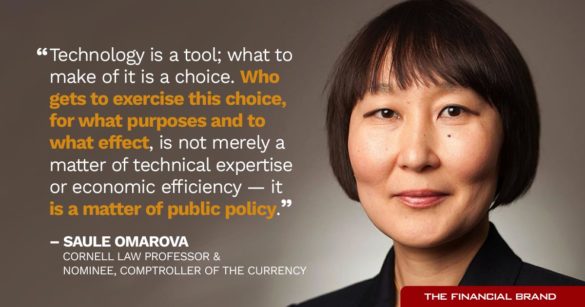 To put it succinctly:

Her nomination was cheered by Senate Banking Chairman Sherrod Brown (D.-Ohio). He said that “her experience as a policymaker, in the private sector, and in academia will allow her to work with stakeholders across our financial system to ensure the economy works for everyone, and to protect our economic recovery from the risky activities of Wall Street and other bad actors.”

However, Brown’s opposite number, Ranking Member Pat Toomey (R.-Pa.) said Omarova has “advocated for ‘effectively end[ing] banking as we know it.’ In light of these, and other extreme leftist ideas, I have serious reservations about her nomination.”

Update: Omarova’s confirmation hearing with the Senate Banking Committee was set for Nov. 18.

After getting her Ph.D., Omarova went to Northwestern University School of Law for her J.D. Today, Omarova is Director of the Program on the Law and Regulation of Financial Institutions and Markets at Cornell University’s law school. In private practice she worked for about five years in the Financial Institutions Group of Davis, Polk & Wardwell. She subsequently spent a year as Special Advisor for Regulatory Policy to the Under Secretary for Domestic Finance at the Treasury Department during the second term of President George W. Bush. This took place in 2006-2007, the beginning of the emergence of the financial crisis.

The following summarizes, chiefly through quotations from statements and papers of Omarova’s, the often-detailed observations that she has made about the financial system as it is and as she would like to see it. (Update: After a month of controversy in the industry after the administration’s “intention to nominate” was announced, Omarova’s name was formally sent to Capitol Hill in early November 2021.)

Read More About the regulatory scene in Washington, D.C.:

Rethinking Banking as ‘The People’s Ledger’

In her 2021 draft paper “The People’s Ledger: How to Democratize Money and Finance the Economy,” she lays out the skeleton of a plan to redraw “the currently dysfunctional U.S. financial system by reimagining its fundamental structure and redesigning its operation.”

“The Fed’s entire balance sheet should be redesigned to operate as what it calls the ‘People’s Ledger:” the ultimate public platform for both modulating and allocating the flow of sovereign credit and money in the national economy. On the liability side, the [paper] envisions the ultimate ‘end-state’ whereby central bank accounts fully replace — rather than compete with — private bank deposits.”

“… all of the Fed’s key monetary policy choices and their outcomes would be reflected on the liability side of its balance sheet, leaving the asset side free to serve as the tool of the economy-wide credit allocation. More fundamentally, the proposed restructuring of the Fed’s balance sheet would democratize not only access to financial services but the very process of generation and allocation of financial resources. It would therefore directly impact not only the banking industry but also ‘shadow banking’ and capital markets.”

Her blueprint makes some provision for participation by community banks and smaller credit unions, but apparently chiefly as agents of the new Fed system, receiving fees for their services.

From Senate testimony in 2018 in reaction to the Trump administration’s blueprint for financial reform:

“The increasing concentration of economic power in a small club of corporate giants is a direct threat to American democracy. It perpetuates and exacerbates deep socio-economic inequality, which inevitably undermines political order premised on ideals of equal participation and voice. Big corporations’ ability to ‘buy’ political influence fundamentally corrupts political process and corrodes public confidence in the democratic system as a whole This is an unacceptably high societal price for the personal convenience of accessing one’s bank accounts and digital wallets via a single iPhone click.”

Fintech and the Role of Technology

“Fintech is visibly ‘disrupting’ traditional methods of delivering financial services and conducting financial transactions,” wrote Omarova in her paper “New Tech V. New Deal: Fintech as a Systemic Phenomenon.” She added: “Less visibly, it is also changing the way we think about finance and envision its future trajectory.”

It is fair to say that many aspects of fintech are unregulated, at least in the formative stages. Omarova sees some attraction to an end to that innovation freedom, by requiring private firms to demonstrate to regulators that each product they intend to market meets three tests. These are:

From Senate testimony in 2018:

“It is worth emphasizing that advances in technology are increasingly enabling private market participants to create tradable crypto-assets effectively out of thin air. These crypto-assets — digital tokens or bits of data representing some value — can have such an attenuated connection to productive activity in the real economy as to be practically untethered from it. By potentially rendering the financial system entirely self-referential, this type of unchecked private sector ‘innovation’ can fundamentally undermine — rather than promote — the long-term growth on the part of the American economy.

From her paper “Technology v. Technocracy: Fintech as a Regulatory Challenge”:

“[Central bank digital currency] is a response to the increasing threat private cryptocurrencies pose to financial stability and monetary sovereignty. An operational CBDC would either replace privately issued crypto-coins, including the increasingly popular stablecoins, or render them far less ubiquitous in financial transactions.’

Regarding Data Sharing Between Banks and Fintechs

From her 2018 Senate testimony:

“Simply relaxing existing bank regulations in order to allow wholesale migration of the highly sensitive and valuable financial information currently controlled by banks to data aggregators, cloud providers, and other fintech companies would expose consumers to potentially massive data privacy and safety risks. Rather than gaining meaningful control over their personal financial data, American consumers will be an easy target for unscrupulous salesmen of the digital era.

“A prudent public policy approach to safe and secure financial data-sharing in the digital age requires a deeper and more balanced analysis of these risks, as well as the means of preempting them.”