Bank branches are lonelier places these days. 58% of those under 30 have visited a branch in the last month. But don’t rush to shutdown your brick-and-mortar locations yet… half of all Americans still bank in person.

Three in ten Americans haven’t visited a bank or credit union branch in at least six months, according to a report from Bankrate.com. But half of Americans have visited a branch to conduct personal financial business within the past 30 days.

While there was some variation among different age groups, it was not as wide as expected. Among those under age 30, 42% have been to a branch within the last 30 days compared to 52% of those over age 50.

Younger people were less likely to visit their banks or credit unions. Only 19% of respondents between 18 and 29 years old said they visited within the last week, compared with 29% for those between 30 and 49 years old.

Read More: Poof! Branch Transactions Drop By Half in 20 Years 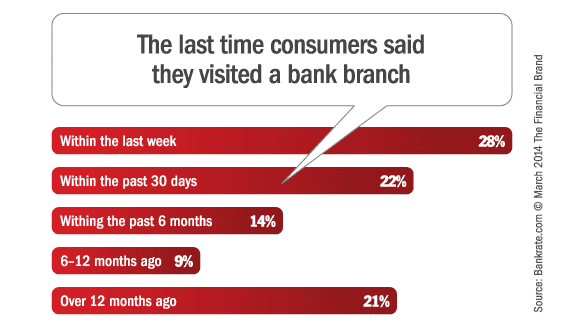 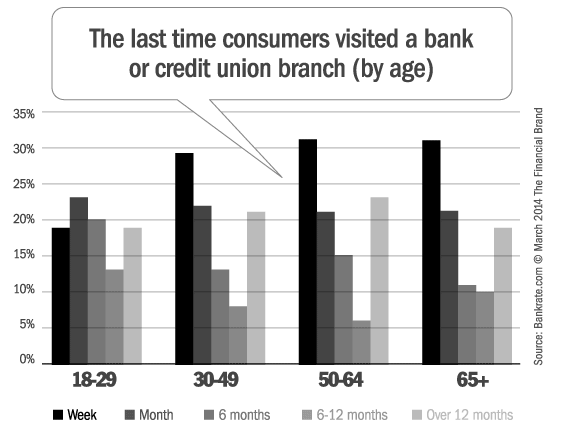 “I can’t remember the last time I physically went to my bank branch,” Maranda Gibson of Fort Worth, Texas told Bankrate. “It’s not because I don’t have a wonderful bank — I do. It’s because the bank has made it so easy for me to not have to visit a branch.”

“I do all of my customer service via their social media account,” Gibson explains. “They respond, call you, answer your question, and done. I’ve had two issues resolved with a simple tweet, and it took about an hour.”

The more education consumers have translates into more trips to the bank. 35% of respondents with at least some college experience said they visited the bank within the last week, compared with 21% who had a high school education or less.

Smaller incomes meant fewer trips to the bank. Among respondents who earn less than $30,000 a year, 29% said the last time they visited a bank was more than 12 months ago. That’s nearly twice as much as respondents who made $75,000 or more per year.

One in five retirees has not visited a branch in over a year. 53% have done so in the past 30 days, slightly more than the 50% figure for the overall population.

“The number and location of bank branches, as well as their functionality, will continue to evolve, but clearly they’re not going away,” said Greg McBride, CFA, Bankrate.com’s chief financial analyst.

Last year, there were 96,000 bank branches throughout the United States, down from a high of 99,000 in 2009, according to the Federal Deposit Insurance Corporation.

Back in 2012, the American Banking Association found that 39% of Americans chose online banking as their preferred means of managing their accounts, more than twice the share who favored visiting their local branch (18%).

“People will use their mobile devices or computers for many transactions like paying bills or checking balances, but when it comes to opening an account or getting financial advice, they want to do that face to face,” Bank of America ATM and Retail Distribution Executive Rob Aulebach wrote in an article for American Banker.

The survey brought in a sample of about 1,000 adults, more than 95% of whom currently use a bank, according to Bankrate. Princeton Survey Research Associates International conducted the survey on behalf of Bankrate and phoned more than 1,000 adult Americans in early March. Visits to ATMs were not included in these figures.