Subscribe Now Get The Financial Brand's FREE Email Newsletter
Self-service banking spiked during Covid, when interactive teller machines with live two-way video fit the bill. Now bankers are wondering if ITMs are the must-have technology for the branch of the future. Experts debate whether investing in ITMs versus ATMs makes sense.

Mobile and online banking dominate retail banking now. That doesn’t bode well for bank branches, and industry experts continue to battle over whether or not the branch is a perishing banking channel.

There is an in-between solution, however: ATMs and other self-service technologies, which walk the line between digital and physical.

Self-service banking technology usage skyrocketed during the pandemic as a great way to avoid the risks of in-person banking.

In fact, the bank kiosk market was worth $756 million in 2021 globally and is projected to reach $2.2 billion in the next decade, according to Allied Market Research.

There’s another twist though. Bank kiosks used to refer to specialty units typically set up for some limited function, like account opening. Not anymore. There is now a broad swath of terms that financial institutions and fintechs coined to describe new self-service banking technologies: ITMs, video tellers, IBKs, PTMs, VTMs, self-service kiosks, self-service technologies. And of course ATMs.

Despite all the different names, however, there are really only two buckets these self-service banking tools can be dumped into: ATMs and ITMs (interactive teller machines), explains Gina Bleedorn, Chief Experience Officer at Adrenaline Agency. Most of the terms mentioned above should be lumped under the ITM umbrella.

There's an abundance of words for self-service bank technology. Most of the time, it can be boiled down to two: ATM and ITM.

ATMs are a legacy branch technology, and although some newer ones have enhanced capabilities, Bleedorn, for one, expects ITMs to be the branch tech of the future.

“Most of our clients are considering deploying them and many have deployed them, but everyone is trying to figure out how and what are the use cases, where to put them, how to staff them, and how to shift consumer expectations around them,” Bleedorn tells The Financial Brand.

What Makes an ITM Different From an ATM?

The distinction between an ATM and an ITM may not always be clear just by looking at them side-by-side. It is their functionality and features instead that distinguish the two.

Banks and credit unions are very familiar with ATMs, which perform basic banking tasks and a limited range of other functions depending on the machine. On the other hand, an ITM can perform significantly more banking transactions, such as loan payments.

An ITM typically has a video teller built in to emulate the traditional experience with a teller inside the branch. In fact, nearly all of the transactions (95%) that a bank teller can do, an ITM can do too, an Adrenaline report found. 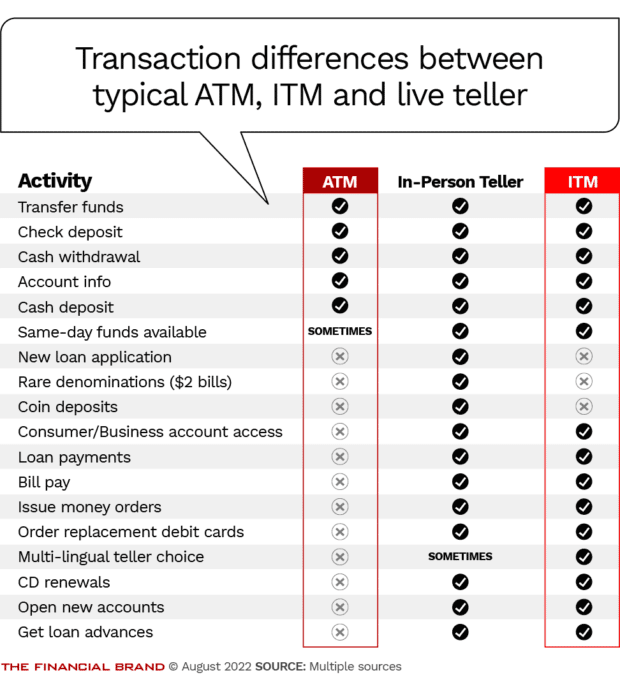 What Is the Best Technology to Roll Out?

Debates about technology are numerous in banking. There is the “mobile versus online banking” argument as well as the “bank branches are dead” conversation.

Already, the ITM versus ATM debate is happening in banking.

“You’ve got some people that are bank facility managers that are being forced to implement this new technology, and not knowing what to do with them or alternatively, you have some that are deploying them and loving them,” says Bleedorn.

“You’ve got the bankers wondering ‘Is this a flash in the pan?’ or ‘Is it something that people are only going to be concerned about now because of the environment we’re operating in and then ten or two years from now, I have all this capital investment out there that no one is using it the way I want them to use it?'” King says.

The questions are valid. With digital technology advancing at a quick clip, it’s difficult for any financial institution to justify an investment in the tens of thousands. The average ITM can cost upwards of $80,000. 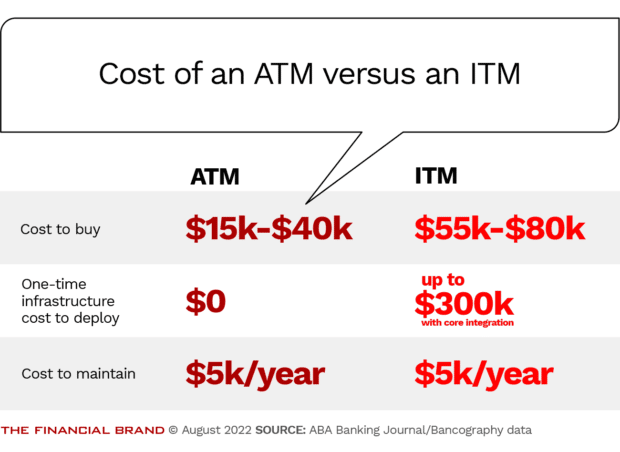 It can also be more costly — and more difficult — to install ITMs at a legacy branch than it is to add the technology to a new branch, Bleedorn says.

Existing ATMs can be upgraded to become ITMs as an alternative to simply buying a completely different unit. King says the extra cost in that case can depend on the age of the existing ATM fleet. Newer machines are cheaper to upgrade to modern ITM technology than it would be to have to start fresh.

“If banks have newer machines, they’re just flipping the switch,” he says. “But, if they have 1995 vintage machines, they have to rip them out and replace them. The people with older fleets see it as a path of most resistance because they’re talking about a massive overhaul.”

Learn More: What It Will Take to Have Interactive Tellers Catch On with Consumers

But maybe the price of these two types of self-serve technology is not the best comparison metric. Bleedorn says an ITM is generally one eighth the price to build and deploy when compared to a full-function credit union or bank branch. This is critical to recognize given that more than half the time (60%), branch employees are performing tasks that could be automated by an ITM, she points out. These machines provide an alternative for customers to conduct nearly all of their banking without needing to wait in line in the branch.

“Once that person understands what the ITM can offer, you get expanded use, you get some additional customers, you get customers that would have gone through some other channel,” King explains.

Three out of five times, branch employees are completing transactions for customers that an ITM could automate.

Adrenaline estimates roughly a quarter of financial institutions already have ITMs in some capacity, as of summer 2021. At the time Adrenaline’s teams ran the survey, another 60% of banks and credit unions said they were planning on rolling out an ITM in the future.

Bleedorn says that number is likely much higher now.

There are typically three methods for deploying ATM or ITM technologies, Bleedorn explains. The first is building out a larger footprint of ATMs, both in and outside the branch. Banks and credit unions can also install an ATM that can be turned into an ITM down the line. And then there are the full-scale ITM technologies.

Read More: The ATM of the Future Will Be Much More Personalized

Let’s say a financial institution decides to implement ITMs. Where should they put them? Do you put them in the branch, in a vestibule, in a drive-thru? Do they need to be attached to a branch at all if they are serving the same purposes a teller in a branch does?

Bleedorn says some banks advocate for having ITMs in the branch as a way to eliminate or remove friction from a teller line. The problem with this method, she emphasizes, is it requires intense staff training and is more optimal for branches with high-transaction volume, increasingly rare.

Another option, she says, is to deploy one in a 24-hour vestibule so it is easy for customers to access, regardless of the branch’s hours of operation.

However, the primary use for an ITM is generally in a drive-up, or even in a separate area apart from any local branches. Bleedorn says there are Adrenaline clients installing them “miles away from a branch.”

Banking technology doesn't always need to be tethered to a branch. Many banks have rolled out a lone ITM miles from the closest branch.

The advantage of adding a catalog of ITMs that exists outside of a branch footprint is it can develop an idea of ‘perceived presence’ or ‘perceived convenience’.

“For a financial institution, perceived convenience is the number one driver of actual acquisition,” Bleedorn maintains. “Point being — as a bank or credit union — if I can look like I’m in more places as efficiently as possible, I want to do that.” By having ITMs in locations where it is logistically difficult to justify a branch, customers have this enhanced idea of ‘perceived convenience’.

This strategy can also offer another opportunity for financial institutions to build out the financial institution’s brand. In fact, Bleedorn says it is all about creating really well-branded ITMs that are oftentimes standalone units, or sometimes paired up under a common canopy. “Those can be very cost-effective points of presence.”