Subscribe Now Get The Financial Brand's FREE Email Newsletter
Banker-turned-Googler Yolande Piazza talks about the value of bank-tech partnerships, the need to provide financial services for the ways that people really live, and why Americans are gradually adopting do-it-yourself open banking, in an exclusive Banking Transformed podcast interview.

Putting “Google” and “banking” in the same sentence generates fear and loathing among some, optimism among others and speculation by just about everyone else in the banking business.

“Google has no intention of becoming a bank, and if you think about everything that comes with having a banking license, who would actually really want to be getting into that space?” says Yolande Piazza, Vice President for Financial Services at Google Cloud. Regulation is only one of the reasons that actually becoming a bank is not of interest to the big tech, she says. Piazza is not the first Google officer to state that the big tech doesn’t want to be a bank.

Skeptical bankers and credit union executives might think that many fintechs have said as much, but a growing number of them have obtained or set out to obtain banking charters.

But consider one wrinkle here. Piazza knows very well about the regulated world of banking. Until mid-2020, she was a career banker with Citigroup.

After more than two decades at Citi, including four-plus years as COO and then CEO of Citi FinTech, the megabank’s innovation center, Piazza switched to the big tech world. As she tells Jim Marous, Co-Publisher of The Financial Brand and CEO of the Digital Banking Report, during a podcast interview, the shift came with surprises.

“It was a rude wake-up call,” Piazza admits. “I’m not going to lie. At times I have thought, ‘Maybe I should have thought differently about this or that when I was on the other side of the table’.”

Thinking Differently Is About More than Having Tech or Banking ‘DNA’

Piazza has come to appreciate how different the thought process is — and must be — for a big tech player like Google versus a regulated entity like Citi.

Part of it concerns freedom.

“At a large tech organization like Google, you start with the ‘what’s possible. ‘And then you work your way back to ‘what’s doable’.”

Even having helmed a massive innovation center with deep pockets, Piazza admits to appreciating the freedom at Google.

“Something I love here is everyone’s willingness to jump in and rethink past problem statements. There’s nothing that gets teams here more excited than the question, ‘How could we solve this?'”

Having been on both sides now, she says she recognizes that tech firms need to temper their enthusiasm with questions regarding regulators’ thoughts on how they would solve things.

For those who see a straight line as the shortest distance between Point A and Point B, welcome to bank regulation.

“The speed and the timing with which we operate at Google is very different compared to things inside financial services,” says Piazza. “It’s not that there isn’t a desire to move fast. There are just so many other checks and balances in banking that have to be validated along the way before you can even bring something to market as a test.”

However, she adds, “I would tell you, I think people on both sides of the desk are aligned on what the end state should look like.”

Read More: Do Fintechs Scare You As Much As They Do These CEOs?

Many observers have pointed out how legacy management — leaders who came up before digital transformation began —are holding banking back from advancing on the digital front. But Piazza says there’s more to it than that.

“Financial services firms are held to — and should be held to — a much higher standard. When they’re thinking about something new, it’s not a case of, ‘Well, we’ll just test it and if it doesn’t work, we’ll just go in a different direction.’ It has to be validated ten ways from Sunday before a bank can even be able to go into the market and test.”

Piazza says that banking’s innate conservatism is actually essential. Health and wealth, says Piazza, “are two of the most sensitive and personal things that happen to people. So to say, ‘I took a risk with someone else’s money’ or ‘I caused them fees because I didn’t process their payment quickly enough’ isn’t acceptable and it isn’t tolerable.” 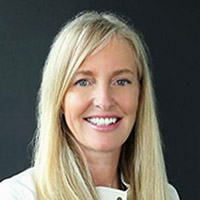 Piazza adds that when one is a banker “what can go wrong is always in the center of your mind.” In spite of that, willingness to participate in new ways of doing business has risen as bankers overcome such caution. An example is the growing use of the cloud in banking.

“I am so glad I’m in this role now versus three years ago,” says Piazza. Back then, bankers were resisting moving confidential consumer data to the cloud.

“Now we’ve moved past many of those conversations,” Piazza says, and, at the same time, many financial institutions have moved past the attitude that all tech solutions had to be built internally.

Focusing on What Consumers Really Need

Even at this stage, Piazza thinks traditional financial institutions, on the whole, must climb out of a product design rut.

“We very much force consumers into the usual product sets that haven’t changed in a hundred years,” says Piazza, speaking as if she were still a banker. “We have to start looking at how people really live their lives.”

There’s a desire for choice and flexibility, for example, the latter including both flexibility of channel and of product. Bankers must delve further into consumers’ strong desire for instant gratification, especially as generations that grew up digitally become a larger and larger share of the population.

In addition, Piazza believes that over the next few years both personal health and personal wealth will intersect and become a joined set of concerns. This has already been seen in many ways during the pandemic, she says, with a health emergency having financial impact as well.

Many have predicted that changed consumer behavior during the pandemic and increased digitalization of banking will bring about the demise of branches. Piazza doesn’t agree.

“I’ve always said that there is no such thing as a digital-only customer, because the minute something goes wrong, the first thing you want to do is talk to somebody: ‘Make it right. I can’t explain this over a chat’.”

That said, Piazza agrees the pandemic was a wakeup call that financial institutions had to bring their digital offerings up to the same level fintechs and ecommerce companies.

Old concepts must be reexamined, Piazza says, to adapt products to how people relate to others now.

“There will be opportunities to deconstruct things,” says Piazza. “Take the idea of ‘family.’ Today ‘family’ could mean me and my dog walker. It could be any kind of combination. Yet financial institutions usually don’t support the way people live their lives.”

This is part of what Google seeks to do with its Plex project.

Financial institutions taking part in the Google Plex project (one of which is Citibank) have shared few specifics about their role in the partnership and the overall platform that Plex is intended to be. But Google has fleshed out some details about Plex, Among the features that the accounts would include.:

Google Plex is expected to launch sometime in 2021. Early research by Cornerstone Advisors indicates that the partnership’s offerings could boom.

Piazza frames Google Plex in a broader context. Many consumers, she says, have fragmented their financial relationships in the search for features and other factors among numerous providers. Thus, in the absence of legislation or an organized industry effort, consumers have stepped into the market’s vacuum and invented open banking, American style, she continues.

“But nobody wants to operate like that,” says Piazza, “so how do you find a way to be able to bring it all together and obtain a quick snapshot to understand your risk and what’s available in an emergency?”

In fact, when asked how a mid-sized institution could move successfully into the future, Piazza suggests becoming a local source of assistance in pulling together far-flung financial relationships.