Tropical Financial Credit Union has a simple question for South Floridians and it’s willing to pay big bucks for the right answers.

During the months of April and May, South Floridians will have the opportunity to step in front of a camera and describe how Tropical Financial Credit Union has helped them (or might be able help them) achieve their financial goals. Each person will have one minute to tell their story.

The five people with the best stories will be paid $5,000 each, and will have their testimonials featured in future ad campaigns.

“I guess you could say this is Tropical Financial’s version of reality TV,” said Rich Helber, Tropical Financial President & CEO. “While we hear the stories every day one-on-one, we thought it would be great if the community at large got a chance to hear them, and learn from these real people what credit unions are all about.”

As a result, the “Fame For Five” campaign was born. 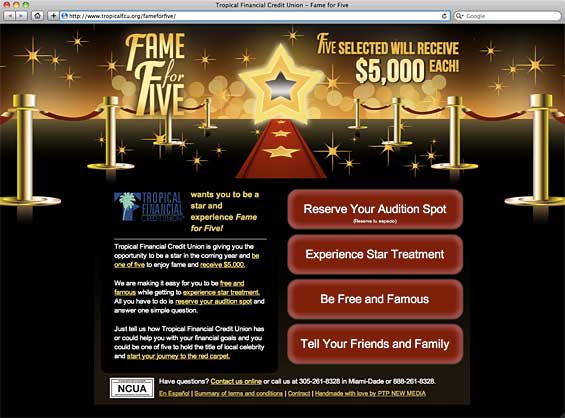 Auditions will be held at the three South Florida locations. Tropical Financial will set up a camera and film anyone over the age of 12 who’s willing to volunteer. However, anyone interested in participating must sign up ahead of time by logging on to www.FameFor5.com.

“You don’t have to be a member to participate,” said Amy McGraw, vice president of marketing. “We even have some ideas on the microsite to help people who want to audition, but may not know what a credit union is all about.”

“If you have an ability to comfortably share a story on camera, we want to hear it,” McGraw added. “We’re looking for the best of the best.”

So far, Tropical Financial has filmed about a half dozen auditions. Many people are using their on-camera opportunity to showcase their singing talents, almost like an audition for American Idol. Here’s one singing bit that’s pretty good. Here’s one that’s kinda strange. Here’s another. Here’s a more traditional testimonial, but in Spanish. And a fresh-faced, smiley teen doing her best spokeswoman act.

This guy is so stiff and scripted, it’s actually kinda funny. At least he’s got a real story to tell and isn’t just trying to advance his career in entertainment.

The most talented singing performance, Latinia covers the Marvin Gaye hit “I Heard It Through The Grapvine” with her version that’s all about Tropical Financial.