Subscribe Now Get The Financial Brand's FREE Email Newsletter
Digital connectivity of everyone to everything, anywhere, and at any time – and the ability to analyze and use this data in all aspects of daily life – provides opportunity and challenges. How the financial services industry responds to these massive changes will determine the success of institutions and the industry as a whole.

The impact of digital technology in financial services over the past several years mirrors the dramatic impact on the economy as a whole. And, while industry leaders are trying to determine the implications of these changes, and best prepare for the developments that are on the horizon, most of us are not fully cognizant of the massive changes to come.

To provide a better perspective, the World Economic Forum conducted a study based on the views of 800 worldwide experts and executives. This report looks into the timing and impact of 21 game-changing ‘tipping points,’ or moments when a specific technological shift may hit mainstream society. In the study, the first tipping point was predicted for 2018 and the last for 2027. 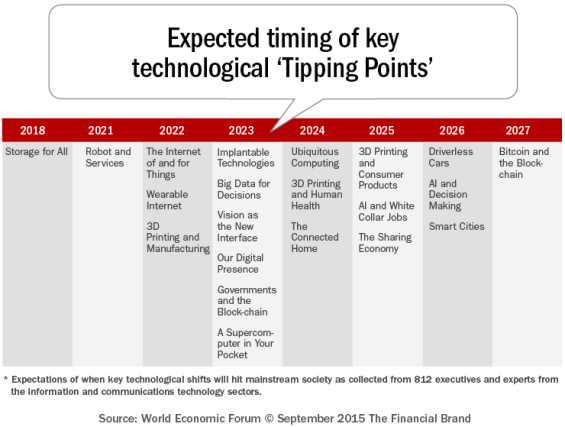 The survey results were also analyzed to see what percentage of respondents expected any of the tipping points to have occurred ten years in the future, More than half of the 21 tipping points had a high expectation (over 80%) of occurring by 2025.

For instance, over 90% of respondents believed at least 10% of people will be wearing clothes connected to the internet and will have unlimited and free digital storage by 2025. Sounding like something out of a sci-fi movie, more than 80% of those surveyed also believed we would have a 3D printed car and an implantable mobile phone within ten years. 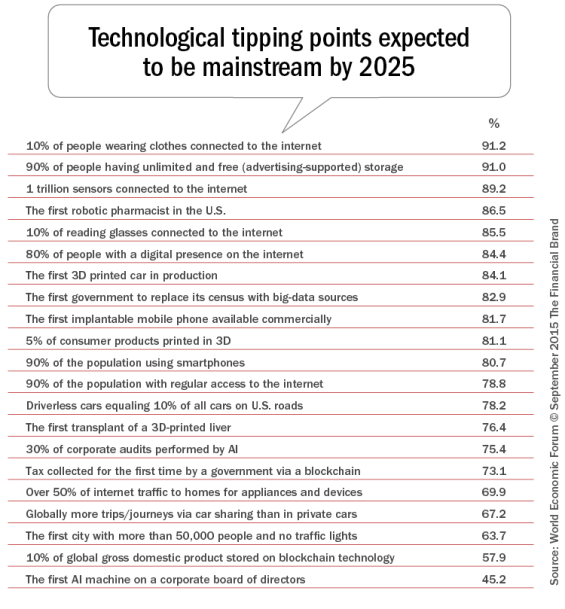 By combining the tipping point with the ‘expected date’ and ‘% by 2025,’ it is possible to see a better vision of what the future may hold. While the report is intended to improve the understanding of the major technological changes in the future, it is more important to determine which changes will impact any given industry … like banking.

In the survey, the tipping points were grouped into six distinct megatrends. These were: people and the internet; computing, communications and storage everywhere; the internet of things; artificial intelligence and big data; the sharing economy and distributed trust; and the digitization of matter.

The Impact on Banking

The above megatrends will impact the way individuals live their lives, interact with each other and conduct business. As more and more of our world is driven by technology and advanced devices, there will be more opportunities as well as threats for existing organizations.

We are already seeing the impact of consumers beginning their shopping experiences on the web, with the completion of the customer journey taking place without ever entering a branch. We also are beginning to experience how quickly (and easily) consumers can change their primary financial provider with little more than a tap on a phone.

Access to insight has never been easier, but the consumer is expecting their trusted partners to know them, look out for them and reward them based on the insight they share. More importantly, they expect this contextual experience 24/7/365, in real-time and through multiple channels including their computer, their smartphone and even through wearable devices.

With data generated with every tap on a device and every step we take and digital conversation we have, what will be the acceptable level of privacy provided? With accessibility enhanced and a path to almost everything possible on the internet, how can we sufficiently protect intellectual property or secure financial data?

As artificial intelligence becomes more proficient at replicating the more basic levels of employment, what happens to human interaction and the delivery of products and services by financial institutions? According to an Oxford study cited in the report, the advent of artificial intelligence could lead to almost half of all current jobs being computerized. How will banking adjust to these changes across the economy?

For those jobs that remain, a new set of skills and competencies will be required. In the future, all companies will be technology companies and all employees will be data technologists.

It is virtually impossible to understand fully the speed that these changes will occur. What isn’t difficult to see is that technology is changing the way we interact and communicate faster than ever in history. This requires a level of proactive preparedness that will allow us to understand the changes and implications of changes for survival.

The growth in digital technology and the impact of data generation and advanced application has resulted in exponential innovation across the industry. This is seen most acutely in the rise in FinTech start-ups that are capturing historical levels of investment.

It has been documented often that we put a man on the moon with less computing power than is now in the basic iPhone. It is not difficult to imagine what the next wave of changes will create. The most important question is whether the financial services industry will be prepared for these changes.

In March 2015, the Global Agenda Council on the Future of Software & Society launched the Technological Tipping Points survey. Based on the council’s discussions over previous months, the survey asked respondents for their views on 21 “tipping points” – moments when specific technological shifts hit mainstream society.

Aiming to provide a snapshot of expectations from a community of over 800 executives and experts from the information and communications technology sector, the survey asked respondents for their perception of when these tipping points would occur, offering date ranges from “it has already happened” to “20+ years”. The option of “never” was also available. A total of 816 responses were
received.

To measure the timing of impacts, the responses of those who answered “never” were discounted; thus, the timeline reflects the perceptions only of those who thought the shift would occur at some point in time.