Subscribe Now Get The Financial Brand's FREE Email Newsletter
In the past year, wearable technology has emerged as the next big consumer electronics market category, particularly in the areas of health and wellness. To capitalize on this growth opportunity, banks and payments firms are investing in wearable product innovation to expand their mobile banking platform. The question remains whether mainstream consumers will find an advantage to adding yet another device to do their banking.

There have been a number of studies conducted on the potential penetration of wearable devices and the acceptance of these devices by consumers. Speculation is a confusing mix of skepticism and hype, as can be expected with any new technology where there is low overall awareness and where viable uses are still being developed.

One of the most interesting studies done on wearables has been done by TNS showing that awareness of both smart watch and headset wearable technology over the past several months is increasing rather rapidly. Unfortunately, during the same period, usage remains almost non-existent and desire to use the technology is actually decreasing. 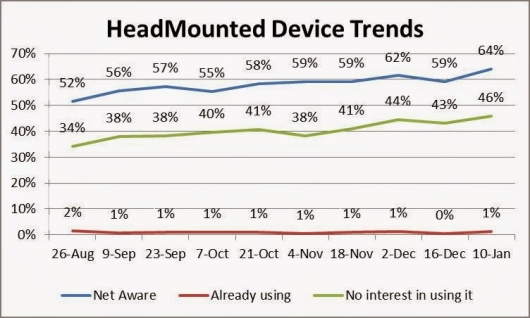 These findings are similar to a late 2013 study by Harris Interactive, that showed that despite a lack of understanding on potential uses, nearly half of Americans (46 percent) are at least a little interested in owning a wristband or watch device with over one-quarter (27 percent) saying that they would be somewhat or very interested. Fewer were interested in an eyewear device (36 percent at least a little, 20 percent somewhat or very).

As would be expected, younger consumers, males and households with children under 18 were the most interested. Interestingly, there was no significant difference is level of interest based on income, despite the potential high cost of the technology.

The overall sentiment today is that there is still skepticism around the technology, with close to half of those surveyed by Harris believing the devices are just a fad (49%). Slightly fewer than four in ten Americans said they would only be interested in the technology if it could replace something they already use. However, one other finding of the poll is interesting: 48% admitted that they’d like to be able to access smartphone functions without having to dig in their pocket or bag.

While still rather early in development, several banks and payments providers have announced innovations in wearable banking awaiting final release of hardware still in development. Almost all allow a customer to do basic transactions such as checking balances and receiving alerts. Others have gone even further.

PayPal will be the first payment provider on the new Samsung Gear 2 wearable devices according to an announcement at the Mobile World Congress. “The PayPal app will allow Gear 2 owners to check-in to pay at local stores, save and redeem offers, send money to a friend instantly, and receive payment notifications while on the go,” PayPal’s Vice President of Global Product Hill Ferguson wrote in a blog post.

Last year, eBay launched an app allowing Gear users to buy and sell their favorite items on the go. The PayPal app allows consumers to shop across more merchants. Consumers will be able to use the eBay and PayPal apps on the new Gear 2 watches beginning in April.

Banco Sabadell will allow users to carry out basic transactions with voice commands. Moreover, a customer will be able to connect with the bank’s contact center, allowing the bank’s customer service agent to see the same thing the user is seeing on their device. Using augmented reality combined with the device’s GPS, the app will also help the customer find the nearest ATM or branch office. According to The Financial Brand, Banco Sabadell is also working on a way to use Google Glass for mobile deposit capture.

CaixaBank has become the first bank to design an application for smart watches. The service, which is already available for the SmartWatch 2, allows customers to follow the stock markets via their watches. The watch will display recent price information for each stock and index, as well as fluctuations since the start of the market session. 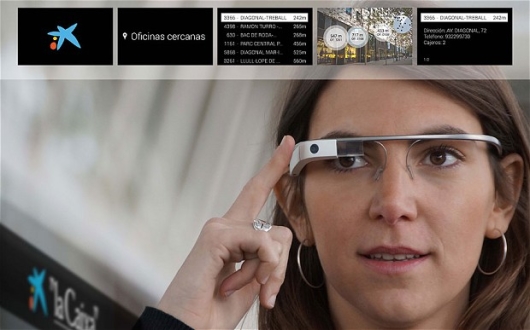 As well as the smart watch application, CaixaBank has also prepared a service designed specifically for Google Glass. The application provides a branch finder based on augmented reality and a currency convertor. The CaixaBank application will show Google Glass users, superimposed on the screen, where to find the nearest CaixaBank branch, the direction they need to travel, how far away it is and the branch telephone number in case they need to call ahead. Customers can also use voice commands. The CaixaBank branch finder and currency converter applications are ready for use, and will be launched once Google officially opens the Google Glass application market in the United States.

The iBeacon technology will transmit special offers to customers’ phones as they pass branches. “By the end of this year, our customers will be able to walk into a shop wearing their Google Glasses, see something they like and instantly check their bank balance which will be displayed in their peripheral vision–that’s pretty cool,” says Simon Pomeroy, the bank’s chief digital officer in New Zealand.

Westpac’s will also extend the functionality to offer customers transfers between their bank accounts, the ability to receive account alerts and also find the nearest ATM or Westpac branch.

According to an interview with CIO Journal, Wells Fargo is testing Google Glass because it’s likely to be popular, at least with some of its customers. To date, however, wearable banking has not generated much traction with the testing group. According to executives of Wells Fargo, the principal issue seems to be that the real estate for apps on Google Glass is fairly limited.

Although Google Glass has not launched to the general public, several other companies are testing payments apps on the device. MasterCard Inc. is building applications that combine the wearable technology with its MasterPass digital wallet and its mobile application, QkR, which reads QR codes. LevelUp is also testing an app that allows Google Glass to be used by a store clerk to scan a QR code displayed on the shopper’s phone. Finally, Intuit is experimenting with payments applications for Google Glass, smartwatches and fitness bands, adapting its GoPayment mobile card reader. Intuit is also building a version of its Mint personal finance management software for Google Glass.

Finally, much like phone-based mobile applications that have been developed outside the financial services industry by Starbucks and others, Disney has introduced personalized wristbands that allow customers to unlock their hotel room, gain entrance to attractions, track guest movements within the park and make payments within on the property. Instead of using a debit or credit card, a guest only needs to wave their wristband under a scanner to make payments.

While the marketplace as a whole may still be slow to embrace the potential of wearable banking, Customer 3.0 (who is digital, social and educated) shows an interest in using wearable technology to manage their finances, despite never seeing or testing a working prototype. Therefore, banks and payments companies interested in serving this segment will need a clear strategy for extending their current mobile banking experience to wearable technology. 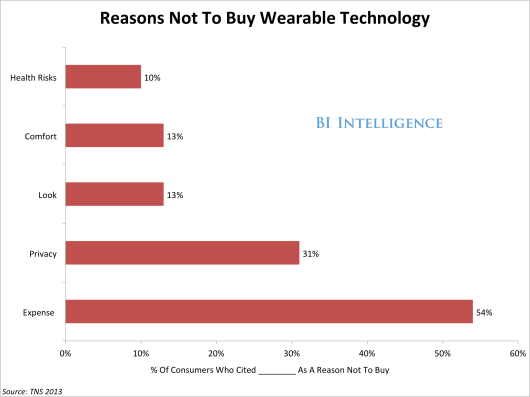 The Eight Myths of Wearable Technology

Despite a ton of activity by both manufacturers and application developers, wearable technology continues to generate more questions than answers. In their research, Accenture found eight misconceptions that all industries, including banking, must consider before making significant investments in this technology:

The Future of Wearable Banking

Can the banking industry innovation leaders go beyond current wearable technology applications that simply replicate what is already available on other mobile devices? Can we learn from the painful lessons of smartphone and tablet banking and build for the device as opposed to using the device to simply access what already exists?

At a recent banking conference, I sat on a panel discussion with Bradley Leimer, VP at Mechanics Bank who made a good point when he said that banks need to determine if development of wearable applications is the best place to focus resources at this time. “There are still a number banks that do not have mobile banking apps or resident tablet applications,” Leimer said. “Should these banks be considering looking at wearables when they haven’t developed the basics of mobile banking that customers want today?”

Understandably, when the room full of bankers were asked whether wearables would have any impact on payments or banking in the next three years, close to none raised their hands. For those few banks who are testing the waters, early applications have mostly been limited to balance inquiries, alerts, real-time receipts and other functions currently handled quite well with other mobile devices.

Successful wearable technology applications in banking will most likely require the following:

Even with the above challenges, I have always been a believer that banks can’t sit on the sideline as others are testing and learning. Much like betting on roulette, it is better to place smaller bets on several alternative solutions than to play ‘wait and see’. While other priorities must we addressed, it is still possible to build new mobile banking capabilities with an eye on the potential impact on wearable banking.

And while wearable banking may not yet be ready for prime time, it is still important to understand and participate in the development of new technologies that eventually will bring together people, process, data, and things to make networked connections more relevant and valuable, creating new capabilities and richer experiences for consumers, businesses and financial institutions.